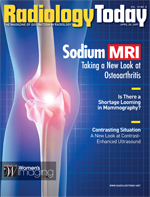 Somewhat overlooked and underused, sodium MRI is helping researchers identify cartilage deterioration that indicates osteoarthritis onset. Garry Gold, MD, and colleagues from the Stanford University School of Medicine in California are imaging young athletes who suffered the kind of knee injuries that often precede this condition.

Ironically, the study involves a condition directly affecting Gold, yet any advancement he may help foster would come too late to provide any personal benefit. An associate professor of radiology at Stanford, Gold sustained a serious knee injury about 25 years ago as a young adult while playing basketball, tearing his anterior cruciate ligament (ACL).

An ACL tear can be serious enough to end sports careers and negatively impact someone’s quality of life; the injury often propagates larger problems later in life, such as osteoarthritis. Gold says many people don’t realize the risk until it’s too late. “In my own case, I continued playing sports without realizing I was at risk,” says Gold, who is now diagnosed with osteoarthritis. “I’m no longer able to run or participate in some of my favorite sports, such as basketball and volleyball.”

Cartilage Deterioration
As in others with the same medical history, Gold’s condition is directly attributable to cartilage deterioration that follows an initial injury. “Perhaps if there had been a way to reveal the status of my knee cartilage, things might have turned out a bit differently for me,” Gold adds.

It’s not that sodium MRI was forgotten; rather, it has just been hard to apply in the clinical setting. For nearly 20 years, the technique, which was pioneered by late Columbia University radiologist Sadek Hilal, MD, PhD, found practical application in research situations, particularly those involving mice. Certain logistical considerations, namely magnet size and field strength, hampered its usage in humans. But the development of clinical 3T MRI systems makes sodium MRI more clinically viable.

The ability to detect osteoarthritis before symptoms could lead to treatments or drugs that do more than relieve pain.

Reengineering the Method
The human body’s mineral composition makes sodium MRI a potential tool. Sodium creates an ionic balance that contributes to healthy cell function and helps stabilize tissues such as cartilage. Its nature and prevalence contribute to its use in imaging.

“The technique has been around a long time but in an undeveloped form that needed to be properly engineered,” says Ari Borthakur, PhD, an assistant professor of radiology at the University of Pennsylvania School of Medicine, who is engaged in similar but separate research. “Before sodium MRI could be performed on a clinical scanner, the necessary software and hardware had to be designed and produced. That’s what we have been working on, and that’s what they’ve done at Stanford.”

Developing suitable coils was the hardware challenge in developing a clinical application. “Our electrical engineering department developed specialized software, and I collaborated with my research group to develop the receiver coils that allowed Dr. Gold to test out his clinical theories about osteoarthritis,” says Brian Hargreaves, PhD, an assistant professor of radiology at Stanford. Along with the larger high-field magnets, these new elements provide the resolution and signal level that are making sodium MRI clinically viable.

Assessing ACL Injury
Gold and his colleagues directed their sodium MRI research toward young athletes who suffered ACL damage in the last 10 years. By early February 2008, Stanford researchers had imaged 17 athletes, looking for differences in the sodium signal from their injured knees compared with their healthy knees. In all cases, sodium MRI revealed a substantial loss of glycosaminoglycan (GAG), one of the most important macromolecules that comprise the cartilage covering the end of bones and joints. GAG molecules help the tissue retain water, providing the necessary and comforting cushioning function, according to Gold.

“GAG is what we look for with sodium MRI,” says Borthakur, whose own research has been pioneering. “GAG forms molecular chains that, in turn, form proteoglycans, an important component of cartilage. A strong GAG presence in cartilage indicates large amounts of sodium.”

GAG depletion is the first step toward osteoarthritis, according to the researchers. Sodium MRI can visualize this loss before the cartilage itself is physically destroyed—something that couldn’t be seen before. It’s why the Stanford and University of Pennsylvania research attracts so much attention.

“Clinicians have been hampered in developing treatments because they didn’t even know the GAG loss took place,” Gold points out. “People who tore their ACL would present with osteoarthritis 10 or 15 years later.”

Even following surgical repair, the imaged athletes face significant risk. Using GAG loss as a marker, Gold and colleagues hope that sodium MRI will become a detection tool that leads to a prevention tool for the debilitating condition. Drawing an analogy, Gold says, “I think of it like a calcium scan for coronary arteries that estimates the risk of heart attack. In a younger person, especially someone who suffered an ACL tear, sodium MRI could help estimate the risk of developing osteoarthritis.”

Find and Someday Fix
At this point, no cure exists for osteoarthritis. Current treatment regimens, including pain medication, physical therapy, and rest, were designed to decrease suffering, help maintain joint movement, and make it easier for sufferers to function more effectively in their daily tasks. For mild osteoarthritis, physicians typically recommend gentler forms of exercise such as biking, walking, and swimming that can help stabilize the joint. They also prescribe rest and applications of heat and cold. Treatment options for moderate osteoarthritis (where pain persists) may require medications in addition to initial treatment options. These include acetaminophen and nonsteroidal anti-inflammatory drugs.

Gold is confident that the research will eventually help physicians determine the efficacy of conventional treatments, as well as develop new treatments for injuries. “For the past 20 or 30 years, when someone tears their ACL, we have done the same kinds of repairs,” he says. “Even though we know that this helps stabilize the joint, it won’t prevent arthritis. So this method gives us the opportunity to try out different ways to treat joint injuries and try and prevent the osteoarthritis from ever happening.”

Sodium MRI could also help pharmaceutical companies develop new drugs and foster clinical trials that couldn’t be conducted with previous MRI technology. “To develop the necessary drugs, pharmaceutical companies must develop elaborate clinical trials involving thousands of patients,” explains Borthakur. “Right now, there really isn’t a good method to determine which drugs are most effective in arthritis treatment. But if you can measure proteoglycans, you can better determine the drugs that work best. The quickest, most effective, and noninvasive way to do this is through sodium MRI. That is what Dr. Gold’s work is all about.”

Seeking Sodium Protons
The ability to image the condition means patients could be imaged at regular intervals to see whether a new drug or treatment technique is reducing or stopping the GAG loss. Sodium MRI requires no contrast agents, and the scanning procedure is similar to conventional MRI but with two significant differences. The first involves the proton of interest. In conventional MRI, radiofrequency pulses excite hydrogen protons, which generate the most robust MR signal. Sodium MRI focuses instead on sodium protons, which produce the second-strongest signal.

“Conventional MRI seeks signals from hydrogen protons and, because they’re in water, they’re the most abundant sensitive nucleus,” Gold says. “Sodium MRI exploits the fact that sodium atoms, like hydrogen atoms, exhibit the MR effect: If you irradiate them with radiofrequency energy, they bounce it back and you can use that to make images, just as you would with hydrogen.”

But the disadvantage with sodium is that it is much less abundant in the body, making it more difficult to image. Specifically, the low signal levels have made the acquisition of quality images challenging, explains Gold, requiring the use of higher field MRI systems.

The other main difference between the two techniques involves coils. “As sodium MRI operates at a different frequency than conventional MRI, it requires a different set of coils,” says Gold.

The researchers addressed this issue with the knee coil developed by Hargreaves and his collaborators. The dual-tuned coil works with both sodium and proton imaging.

Looking Ahead
Sodium MRI has the potential to produce better images of cartilage structure than conventional MRI, as sodium MRI reveals more information about cartilage quality. For instance, images of healthy cartilage reveal a strong sodium signal. Conversely, images of unhealthy cartilage exhibit asymmetric appearances and irregular signal intensity, according to Gold. “Now that we can see these changes taking place before the cartilage is totally destroyed, we want to investigate different treatments to try and reverse changes,” he adds.

As such, the method wouldn’t benefit someone like himself. “For osteoarthritis sufferers who are 40 or 50 years old, sodium MRI wouldn’t be helpful because the cartilage is already gone,” Gold says. “In my case, the horse has already left the barn, so to speak.”

But he notes that his work isn’t about himself. “In the end, it’s not about personal rewards and gratification. Rather, it’s about preventing osteoarthritis after injuries,” Gold says. “After all, these are young people that we’re working with. When they’ve finished their organized sports participation, they will most likely want to stay active in athletics. They have a long life ahead of them, and they don’t need to be troubled with osteoarthritis.”

As for his next research step, Gold says he would like to start working directly with orthopedic colleagues to study different treatment options deployed immediately after an injury occurs and determine how to change the course of the demonstrated GAG loss. This could involve new physical therapy protocols and anti-inflammatory drugs, as well as different types of ACL repair techniques such as double-bundle repair.

But sodium MRI could find value in areas beyond joint injuries and osteoarthritis. Already, Hargreaves and scientists at other institutions are studying applications for other conditions. “I am working with a group that is doing extensive research related to breast cancer, specifically determining if sodium MRI could offer better specificity than conventional MRI when diagnosing lesions,” Hargreaves says. “Also, other groups are looking at sodium MRI for brain applications, including cancer and stroke. One of the most compelling potential applications is the imaging of stroke progression. There is also some thought that sodium MRI could yield crucial information about renal function.”