The Pokémon Go! app is a recent viral smartphone application that allows users to catch creatures known as Pokémon with an item called a Poké Ball. This augmented reality game has been grabbing headlines since its launch by significantly increasing Nintendo's stock, causing multiple accidents, and helping find missing persons.1-3

Radiologists can now responsibly participate in the phenomenon from the comfort of their workstations. We have compiled examples of mature ovarian cystic teratomas that resemble the Poké Ball with an "Aunt Minnie" appearance (Figure 1a).4 We propose the "Poké Ball sign" as a useful descriptor and educational sign to identify these tumors.

Mature ovarian cystic teratomas are common tumors, usually benign, that represent fully developed components originating from at least two of the three germ cell layers: endoderm, mesoderm, and ectoderm. As a result, these tumors can include soft tissue, calcifications, bone, teeth, sebum/fat, hair, and even thyroid tissue.5 While appearances can vary, one of the recurring features on CT and MR is a fat-fluid level, caused by sebum layering atop serous fluid. In many cases, conglomerates of hair, soft tissue, and fat float along this interface, a helpful clue to the diagnosis. The most characteristic feature of mature cystic teratoma is the presence of macroscopic fat, evident as fat attenuation on CT, or T1 hyperintensity that can be fat suppressed on MR.5

The Poké Ball sign succinctly encompasses a group of imaging findings that strongly suggest ovarian teratoma. We believe that a sign associated with a current pop culture craze such as Pokémon Go! will be especially helpful for younger radiologists and trainees. 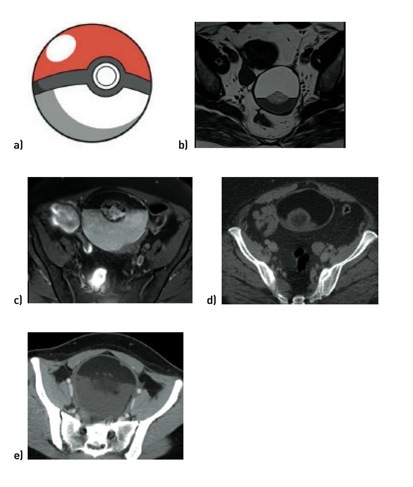 a) A Poké Ball: The fat-fluid levels in the following cases mimic the Poké Ball's two metallic hemispheres, with the central button represented by the material floating along the interface.

c) Axial T1 weighted fat-suppressed MR shows a left ovarian dermoid cyst. After resection, pathology confirmed a malignant degeneration into squamous cell carcinoma along the rim of the cyst. Dermoid cysts are lined with squamous epithelium, and this is a rare complication. 6-7 The patient died one year later from metastatic disease,

— Douglas Rogers, MD, is a radiology resident at the University of Utah.

— Andy Phillips, MD, MOH, is a clinical instructor at the University of Utah.