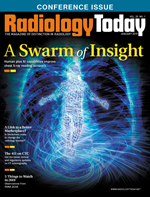 Every year we receive new codes and code revisions, and 2019 is no different. There are many changes that must be appropriately implemented within every organization. The First Quarter 2019 National Correct Coding Initiative (NCCI) edits have been released, so it's important to review the new edits to ensure compliance.

Following are the major changes for radiology's diagnostic and interventional services by modality.

Fluoroscopy
The add-on fluoroscopy code (76001) utilized to report greater than one hour of fluoroscopy time has been deleted for 2019. The assumption was that code 76000 was for the use of fluoroscopy up to one hour and code 76001 was for more than one hour. However, the intent of the code was to identify when a radiologist utilized fluoroscopy during a procedure. It was determined that, from a clinical perspective, there was no longer a need for a separate code, as more physicians are trained to perform fluoroscopy and able to directly perform the service themselves. Therefore, 76001 was deleted.

Diagnostic
The existing code for injection of contrast for knee arthrography (27370) was deleted and replaced with a new injection code (27369) for contrast knee injections to address both traditional arthrography and CT/MRI studies.

This code is only for contrast injection and should not be assigned for arthrocentesis or injection of any material other than contrast. When fluoroscopy is utilized for the injection, according to CPT guidelines it is appropriate to assign 77002 (Fluoroscopic guidance) in addition to this code and the appropriate "with contrast" CT or MRI code. Note for Medicare patients that there is an NCCI edit in place that bundles the fluoroscopy into the CT and MRI codes.

If traditional knee arthrography is performed, code 73580 should be assigned in addition to 27369. Note that the first quarter 2019 NCCI edits for these code combinations should be reviewed.

Ultrasound
The Category III code for ultrasound elastography (0346T) was deleted and three new ultrasound codes have been created to report elastography services. The codes are differentiated between organ imaging and targeted lesion imaging. 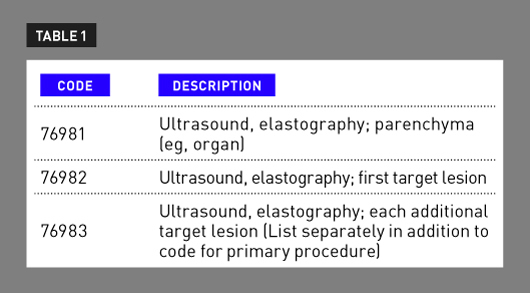 Code 76981 may be reported only once per session for evaluation of the same parenchymal organ. If shear wave liver elastography is performed without imaging, the existing code 91200 should continue to be assigned. If both a parenchymal organ and lesion(s) in the same organ are evaluated in the same session, assign code 76981. The add-on code 76983 may not be assigned more than two times per organ.

Two new codes (76978 and 76979) have been created to report noncardiac targeted dynamic microbubble ultrasound studies that are defined as initial lesion and each additional lesion. The IV injection is not inherent to the CPT codes for abdominal ultrasound, so the contrast injection should be separately reported with code 96374, which represents an initial IV push. This code is not payable to physicians when the service is performed in a hospital or other institutional setting. The contrast agent is reported with code Q9950 (Injection, sulfur hexafluoride lipid microspheres, per mL).

MRI
Magnetic resonance elastography combines MR imaging with elastography to evaluate patients for disorders such as liver fibrosis and cirrhosis. The sound waves are produced by placing a vibrating paddle on the patient's abdomen during the exam. Code 76391 was created for this imaging study for 2019.

The two existing CPT codes for breast MRI (77058 and 77059) have been deleted and replaced with four new codes. 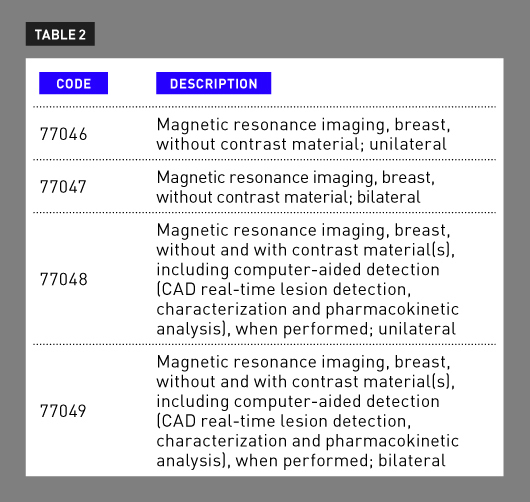 Codes 77046 and 77047 are reported for breast MRI without contrast. Codes 77048 and 77049, MRI with computer-aided detection (CAD), can help radiologists identify abnormalities on breast MRI. CAD MRI is used only with contrast-enhanced MRI and would not be performed without contrast. The long-standing Category III code 0159T has been deleted and will no longer be utilized to report breast CAD.

Hospitals will continue to use HCPCS Level II codes C8903–C8908 (note C8904 and C8907 were deleted for 2019) when billing Medicare for breast MRI under the Outpatient Prospective Payment System. The code selection is based on the laterality of the exam and whether contrast is used. When CAD is performed in the hospital outpatient setting, the new HCPCS code C8937 (Computer-aided detection, including computer algorithm analysis of breast MRI image data for lesion detection/characterization, pharmacokinetic analysis, with further physician review for interpretation [List separately in addition to code for primary procedure]) is assigned and the breast MRI is reported with the appropriate C code.

Nuclear Medicine
The only change in nuclear medicine was the deletion of the three codes for vitamin B12 absorption studies (78270 to 78272).

According to new CPT coding guidelines, when more than one FNA biopsy is performed on separate lesions, during the same session on the same day, utilizing the same imaging modality, only one base code may be assigned along with the add-on code for the second and subsequent lesion(s).

When more than one FNA biopsy is performed on separate lesions, during the same session on the same day, utilizing different imaging modalities, each biopsy should be reported separately. Modifier 59 should be applied for each additional imaging modality and corresponding add-on codes for subsequent lesions sampled. These instructions apply to all lesions regardless of their location (ipsilateral or contralateral) and whether or not they are in the same or different organs/structures.

When FNA and core biopsies are performed on the same lesion, same session, and same day utilizing the same type of imaging guidance, the imaging guidance for the core biopsy may not be separately reported. According to CPT guidelines—addressed at the American Medical Association (AMA) CPT Symposium in Chicago in November 2018—it is appropriate to assign the biopsy surgical code; however, the NCCI guidelines state, "[I]f the specimen is not adequate and another type of biopsy (eg, needle, open) is subsequently performed at the same patient encounter, the physician shall report only one code, either the biopsy code or the FNA code."  This represents another example where Centers for Medicare & Medicaid Services and AMA guidelines differ for a key coding issue so it is important that you follow your payer guidelines. 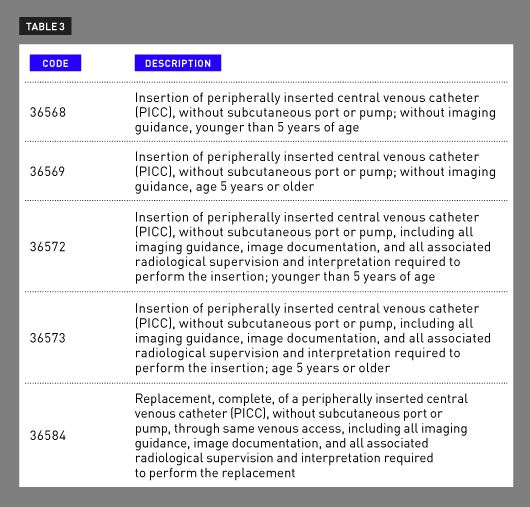 Because they are now inclusive of all imaging, the existing ultrasound documentation guidelines are reiterated in conjunction with the new codes. There are also explicit instructions to not assign the chest X-ray codes (71045 to 71048) for the purposes of documenting the final catheter position on the same date of service. If the provider utilizes imaging guidance but cannot report confirmation of the catheter tip, modifier 52 must be applied to the PICC code (36572, 36573, and 36584). PICCs placed using MR guidance, or any other guidance modality that does not include imaging or image documentation, must be reported with the nonimaging codes 36568 and 36569.

One other key addition was placed in the guidelines regarding correct coding guidance for midline catheter. Specifically, it states that midline catheters are not central venous access devices and may not be reported as a PICC service. Midline catheter placement may be reported with 36400, 36405, 36406, or 36410.

The existing urinary dilation code for nephrostomy tract creation (50395) has been deleted and replaced with two new codes that are differentiated by whether a new access is required. Additionally, the corresponding radiological supervision and interpretation code (74485) was revised to specify that the code applies only to the ureter(s) or urethra vs a nephrostomy tract. 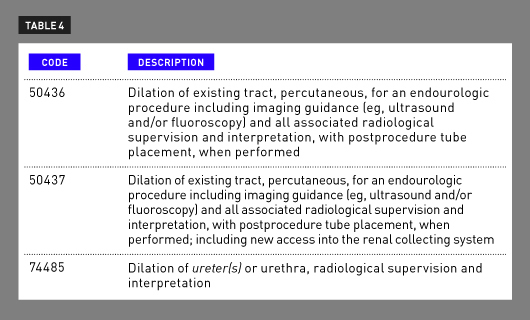 Code 50436 may not be reported in addition to the placement codes 50432 to 50434 for basic dilation of a percutaneous tract during initial placement of a catheter or device.

A new Category III code was created for chemical ablation with balloon isolation of an incompetent extremity vein, which includes all imaging necessary to complete the procedure.

Summary
The only constant is change, and these coding changes are a worthy addition to the updates for 2019. Up-to-date documentation and coding processes ensure compliance and appropriate reimbursement. Before long, the industry will be discussing new codes for 2020, which will, once again, bring their own set of challenges and opportunities.