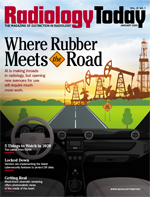 With RSNA recently wrapped and 2020 just beginning, it’s time once again for Radiology Today’s peek at the developments that have potential to reverberate throughout the year and beyond.

If I had to choose a single word to describe this year’s RSNA gathering, I would go with “adaptation.” Radiology has been doing more with less for years, and that’s not likely to change, but it seemed to me that there was an increased emphasis on versatility this year. And that versatility took many forms, from integrating AI into radiology workflows and tighter coordination of care among departments to bringing imaging to patients.

Read on to find out where these trends may lead.

1. Friendly AI
This isn’t a reference to computer-generated affirmations or chatbots that boost self-esteem. What was particularly noticeable this year, however, was a significant lack of hand wringing over whether AI will eventually cost radiology jobs. The prevailing sentiment was more along the lines of, “How can AI help radiologists read more images, more accurately, without slowing down workflow?”

To underscore how interest in AI has grown over the past few years, AI vendors were treated to their own room in McCormick Place, dubbed the AI Showcase pavilion.

Integrating AI into radiology workflow came up many times, with not quite as much emphasis on the AI part as years past. Instead, the focus shifted to integration. Although still fairly bright and shiny, AI is not quite the distraction that it once was, and that’s probably a good thing. People recognize it as a tool that can help them do their jobs better, but they don’t want it to slow them down. Nearly all of the AI platforms and marketplaces made mention of how their AI tools and apps operate seamlessly within radiology workflow.

Another use of AI that is picking up steam is image acquisition. There were a few examples of AI-enhanced image acquisition at RSNA 2018 and a larger number—for more modalities—at RSNA 2019. Some are FDA cleared and some are pending, but it appears that this is an area where AI may have a significant effect in the near future. The ability to reduce the number of retakes and/or shorten exam times will almost certainly increase throughput and, potentially, make difficult-to-detect features easier to spot.

Of course, there are still significant challenges associated with AI. A particularly interesting session with Raym Geis, MD, FACR, FSIIM; Judy Gichoya, MD; and Elmar Kotter, MD, MSc, PhD, MHBA, on AI ethics highlighted privacy, transparency, and complexity issues as potential stumbling blocks. Despite growing enthusiasm for AI, the panelists noted that there is still much to learn about the technology and its ramifications. As Geis asked, “How ethical is ethical enough?”

2. Better Analytics
With all of the data that are collected in health care these days, there is significant interest in applying analytics, both traditional and AI-based, to so-called big data to improve operational efficiency and patient care. Despite the interest, execution is still a work in progress. To paraphrase Abraham Verghese, MD, MACP, from his opening session lecture, big data is like teenage sex: Everybody talks about it, but nobody really knows what they’re doing. So it seems safe to say that people are still figuring it out.

In the near term, analytics is already helping with some operational tasks, such as dose tracking and modality usage, and more than one vendor is working on ways to improve tracking and communication of follow-up recommendations. In the treatment realm, Lisa A. Kachnic, MD, spoke in the Annual Oration in Radiation Oncology about AI-based decision support tools that map tumor contours throughout cancer treatment so radiation therapy can be continuously adjusted. Further down the road, there is hope that predictive analytics will help physicians determine the most effective treatments for specific disease states based on imaging and other types of data, such as genomics.

In the Annual Oration in Diagnostic Radiology, Sanjiv S. Gambhir, MD, PhD, discussed the role of data in precision health. Precision health, he said, differs from precision medicine in that its goal is to prevent illness rather than treat it. Gambhir cited a range of wearable sensors that are currently available and outlined how they may inform the picture of a person’s overall health. He also discussed ongoing studies that are using these data to build more complete profiles of participants’ health.

Gambhir suggested that, in the future, radiologists may be well placed to serve as care coordinators because of their facility to comprehend data and manage cutting-edge technologies.

3. Better Coordination of Care
Coordination of care was the topic of this year’s RSNA/American Association of Physicists in Medicine (AAPM) Symposium. As we reported in our December issue, integrated diagnostics—the combination of radiologic, pathologic, and genomic data to inform patient care—is drawing attention in health care circles. Although, as Mitchell D. Schnall, MD, PhD, put it, nobody currently wants to “own it,” there will likely come a time when a care coordinator is needed.

At present, there are no set rules for aggregating the data, and Schnall cited a need for processes and structures that allow for fast data aggregation as important goals. He believes integrated diagnostics will change radiology and force radiologists to “come out of the reading room.”

Anant Madabhushi, PhD, also delivered a lecture as part of the RSNA/AAPM Symposium. He focused on ways in which AI can help with data aggregation, citing several examples, such as coregistering radiology and pathology images and improving diagnostic and prognostic tools. Vendors also seem to be taking notice of the possibilities. I spoke with a few who are incorporating pathology and/or genomic tools into their offerings.

4. Data Interoperability
Outside of pathology and genomics, Vijay M. Rao, MD, a past president of RSNA, spoke of the need for radiology and other specialties to move away from turf wars and toward integrated care. Although her talk touched on many aspects of radiology business, she pointed out that the profession needs to be better able to distribute data among multiple sites.

The need for data access is at the heart of health care, and radiology data are in high demand. Many clinical trials rely, at least in part, on imaging data, and medical images and reports are considered required reading. But sharing data can be difficult. There are large amounts of unstructured data in any health care enterprise, requiring advanced IT tools to allow standardization and sharing, and many providers are still reluctant to allow patient data to leave their servers.

Deidentification of patient data, which is essential for clinical trials, is a notoriously troublesome process, as evidenced by a recent report of researchers reconstructing patients’ faces from supposedly deidentified MRI data. Some vendors I spoke with at RSNA claim to have made significant breakthroughs in data deidentification, however.

As more patients expect access to their data, sharing it with them is taking on added importance. The consumerization of health care and the drive to eliminate CDs are helping to propel efforts to share the data digitally. Several vendors now have patient portals to facilitate patient access.

5. Focus on the Patient Experience
Despite the clear need for better data analytics and interoperability, Verghese noted in his lecture that data can sometimes obscure the view of the patient. He cited overreliance on data as a root cause of patient dissatisfaction, physician burnout, medical error, and the loss of ritual—by which he meant examining patients with attentiveness and skill.

Focusing on the patient experience may seem, at first glance, to be at odds with the way radiology works today and, in some ways, it is, but there were signs at RSNA that people are thinking about new and better ways to serve patients. Perhaps one of the most striking examples is mammography. Several companies were promoting not only more comfortable mammograms but also a vision for the entire continuum of breast care.

Another interesting trend was the idea of conforming imaging to patients. Every fluoroscopy room I saw had the ability to move equipment around patients and clinicians to reduce the amount of patient movement needed to perform the procedure. There were also in-room features, such as tableside controls and access to prior imaging, designed to reduce the time needed to perform the procedures.

Bringing imaging to the patients extends to mobile imaging. Ultrasound is becoming a more popular option, not only because of its mobility and the fact that it doesn’t use ionizing radiation but also because ultrasound image quality keeps improving. There were also new mobile DR carts that are easier than ever to maneuver. Mobile CT units are being installed on trucks that can serve as mobile stroke units or lung screening centers.

Perhaps the most surprising innovation that I saw at the show, however, was an air-cooled, mobile MRI that can be wheeled to where it’s needed in the hospital. It’s 510(k) pending.

There were many more interesting developments, to be sure, but those are the ones that stood out the most to me. I don’t know about you, but I can’t wait to see what the ’20s bring.