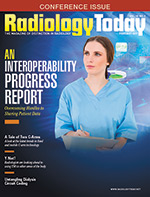 A 43-year-old woman presented for a diagnostic mammogram. She reported two right breast areas of palpable concern (marked via skin markers), one focal palpable area at 5:00/6:00 (Figure 1) and the other at 6:00 (Figure 2). There was no family history of breast cancer.

Targeted right breast ultrasound was performed at 5:00/6:00. The 5:00/6:00 palpable lesion corresponded with an oval nonshadowing heterogeneous hypoechoic 0.6 cm mass (Figures 3 and 4). The 6:00 posterior depth palpable concern was a benign cyst (images not provided).

Mammography demonstrated an equal density 5:00/6:00 focal asymmetry at posterior depth which correlated with a nonshadowing heterogeneous hypoechoic 0.6 cm mass on concurrent targeted ultrasound. No suspicious calcifications on mammography. A typically benign palpable cyst was noted at 6:00 (images not provided).

Clinical history and physical exam often reveal a firm, painless, and palpable breast mass. The patient may have dimpling or skin retraction.

On mammography, granular cell tumors of the breast can appear as poorly defined, spiculated lesions, similar to a breast carcinoma. The lesion may also appear as a more well-defined mass.

On ultrasound, these tumors have variable appearances. The lesion can appear as a heterogeneous mass with varying echogenicity, poorly defined borders, or posterior shadowing prompting concern for breast malignancy. Conversely, they may appear as a well-circumscribed hypoechoic mass with posterior enhancement, mimicking the appearance of a complicated cyst.

— Kathryn Becker is a fourth-year medical student at the University of Connecticut School of Medicine.

— Miguel Ramirez, MD, is a fifth-year resident at the University of Connecticut Health Center.

— Alex Merkulov, MD, is an associate professor of radiology and the section head of women's imaging at UConn Health.

2. Irshad A, Pope TL, Ackerman SJ, Panzegrau B. Characterization of sonographic and mammographic features of granular cell tumors of the breast and estimation of their incidence. J Ultrasound Med. 2008;27(3):467-475.