History
A 59-year-old postmenopausal white woman with a family history of breast cancer (maternal grandmother) presented to a breast surgeon in November 2019 with persistent left bloody nipple discharge and scaly, irritated, discolored, nonhealing skin of the left nipple with associated intermittent burning and itching. In August 2019, the patient noted new onset of left bloody nipple discharge with nipple scaling and areolar skin changes, which were accompanied by intermittent itching and burning. She reported that after episodes of bleeding, her nipple would scab up and then the scab would fall off and the bleeding would resume. Most recently, she noted a half dollar–sized bloody nipple discharge in her bra. She completed a seven-day course of antibiotic therapy with cephalexin 500 mg, four times daily. The nipple initially dried up slightly with antibiotics, but then the bleeding resumed. Since August, the scabs have become thicker and occasional yellow discharge has occurred. After a physical exam by a breast surgeon, the patient underwent a 3 mm punch biopsy of the left nipple and was scheduled for diagnostic left breast mammography, targeted ultrasound imaging, and a breast MRI with IV contrast. 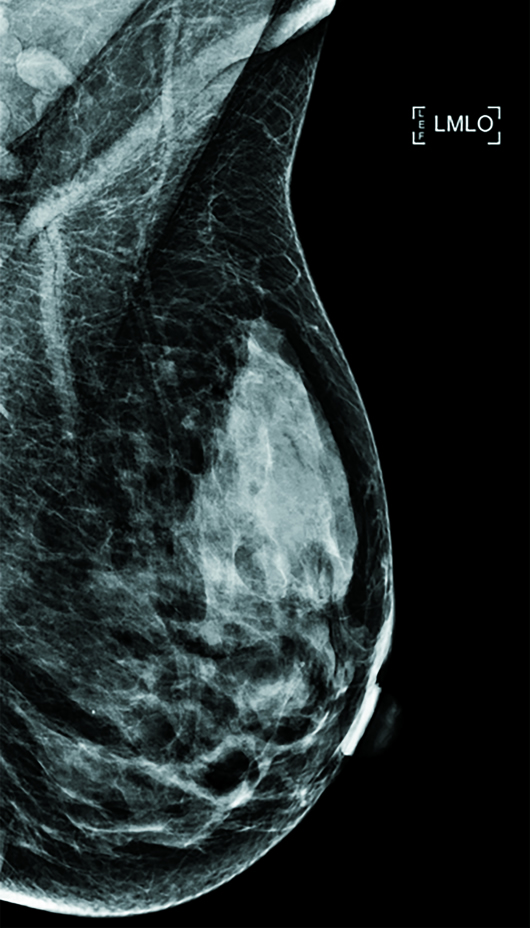 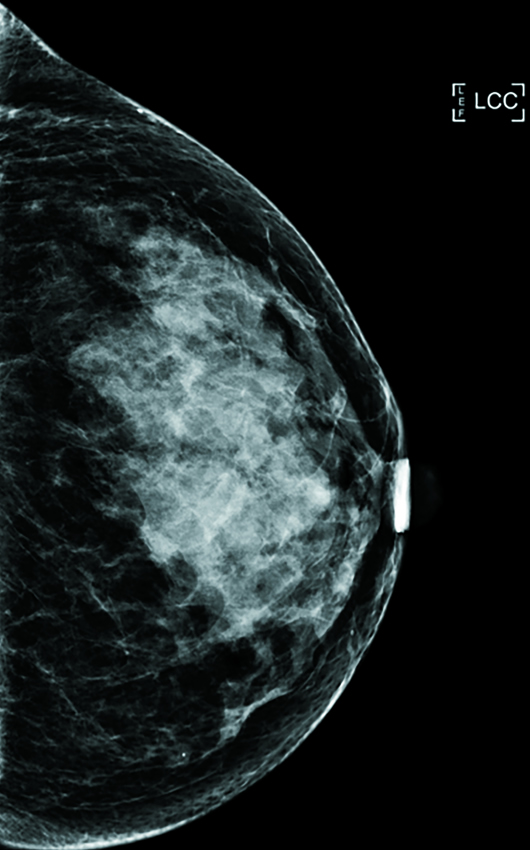 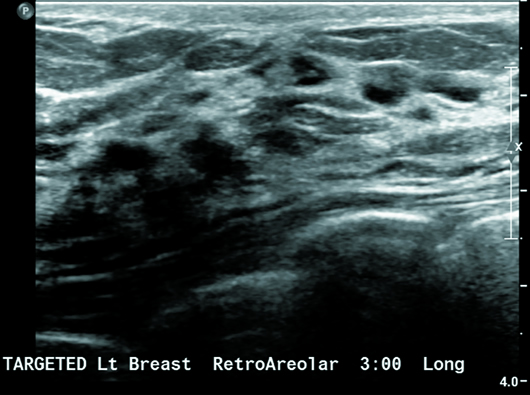 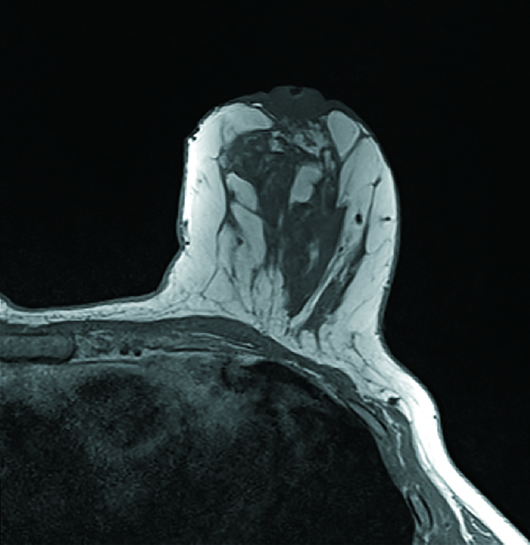 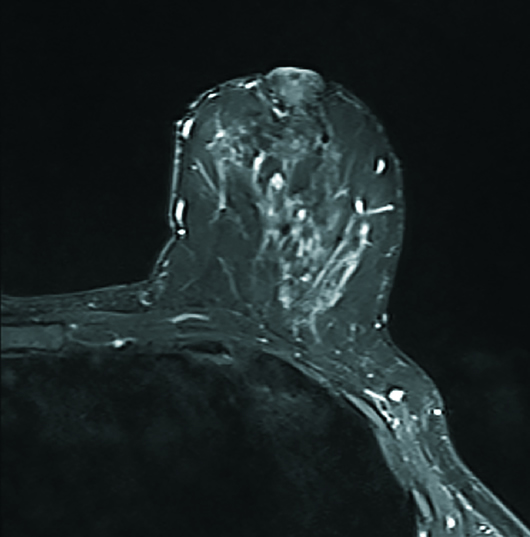 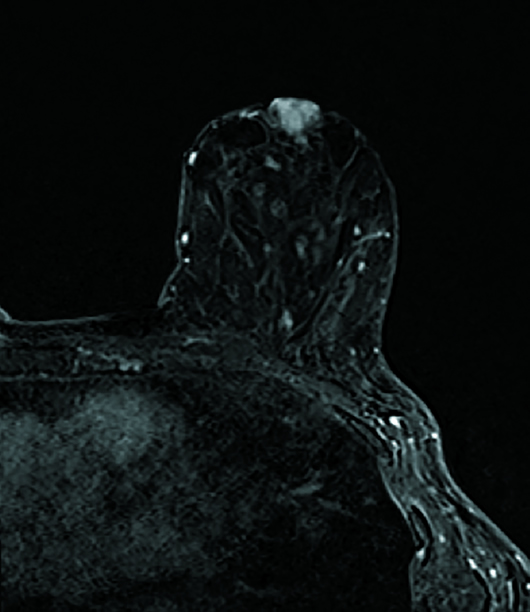 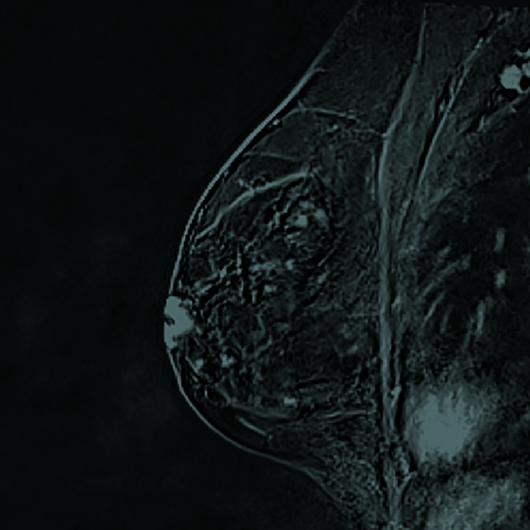 Diagnosis
Paget’s disease of the nipple.

Discussion
Paget’s disease of the breast is a rare malignancy, representing 1% to 3% of female breast cancers, and is characterized by infiltration of the nipple epidermis by adenocarcinoma cells, called Paget cells. Paget’s disease of the nipple is nearly always a sign of underlying breast malignancy and more than 90% of cases are associated with DCIS or invasive breast cancer elsewhere in the breast.

There are two leading theories about the histogenesis of Paget’s disease. The first theory states that invasive breast cancer or DCIS develops in the breast with malignant cells migrating through the milk ducts to invade the nipple-areolar complex. According to the second theory, Paget cells arise in the terminal lactiferous ducts at the junction with the epidermis of the nipple independently of the underlying carcinoma.

Symptoms of Paget’s disease include unilateral itching, eczema, pain, and erythema of the nipple-areolar complex. Nipple ulceration, skin flaking, nipple retraction, and bloody discharge are seen in advanced disease. In 33% of cases, a palpable mass is present at the time of diagnosis. In 54% of cases, there is ipsilateral axillary lymphadenopathy.

Differential diagnosis from benign eczema is important. Benign processes that cause changes of the nipple-areolar complex include eczema, psoriasis, allergic contact dermatitis, irritant dermatitis, and lichen simplex chronicus. Benign eczema is usually bilateral, may be associated with systemic symptoms of atopic dermatitis, and responds to a topical steroid. If symptoms do not improve after treatment with a topical steroid, a punch biopsy should be performed. Malignant processes that cause changes of the nipple-areolar complex are Paget’s disease and squamous cell carcinoma in situ (Bowen’s disease). Bowen’s disease cannot be clinically differentiated from Paget’s disease, and a biopsy is necessary for diagnosis.

It is important to know the clinical manifestations of Paget’s disease because they can be the only signs of the breast cancer. When a patient presents with nipple-areolar changes, a full-thickness biopsy of the nipple and areola is important for establishing a diagnosis. Complete mammographic evaluation should be performed in all cases with clinical findings of Paget’s disease to detect the underlying carcinoma, exclude multifocal disease, and act as a tool for follow-up in patients selected to receive conservative treatment.

Mammography can be normal in 22% to 50% of patients, and an evaluation with ultrasound or MRI is typically necessary. MRI imaging has an important role in preoperative evaluation of the breast, especially when results of mammography or ultrasound are negative. Findings that may be seen on MRI include abnormal nipple enhancement, thickening and enhancement of the nipple-areolar complex, an associated enhancing DCIS, or an invasive tumor. For diagnosis and evaluation of tumors of the nipple and retroareolar tumors, MR imaging has a higher sensitivity than mammography.

Mastectomy, with or without axillary dissection, has been considered the standard treatment in patients with Paget’s disease for many years. More recently, breast conservation therapy, which involves complete resection of the nipple-areolar complex, followed by definitive radiation therapy, has been shown to be a viable alternative to mastectomy in treatment of Paget’s disease, since an estimated two-thirds of patients with Paget’s disease have an underlying cancer that is confined to the central quadrant of the breast. The size of the underlying tumor and lymph node status were the only independent prognostic factors for survival; mastectomy was not associated with better survival outcomes than those associated with central lumpectomy. However, for Paget’s disease of the nipple associated with DCIS or invasive breast cancer elsewhere in the breast (at least 2 cm from the nipple-areolar complex), treatment should include complete resection of the underlying disease combined with excision of the nipple-areolar complex, followed by radiation therapy of the remaining breast tissue.

— Alex Merkulov, MD, is an associate professor of radiology at UConn Health, University of Connecticut.