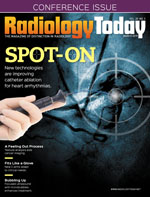 If you surveyed media coverage to understand how AI is going to change the health care system, you might believe the following: 1. AI will create a “your-computer-will-see-you-now” world where intelligent machines will replace human doctors for most medical tasks; 2. AI will usher in a golden age of medicine, giving physicians incredibly powerful tools for diagnosing and treating diseases; and 3. AI will enable us to achieve a much-needed transformation of health care costs, quality, and outcomes. What connects all three is a progression of fear, hype, hope, and an eventual understanding of the best ways to deliver clinical, financial, and practical value that accompanies every new disruptive health care technology.

Radiologists have long adapted to technological innovations and integrated them into their daily tasks. That began with the advent of digital imaging systems in the 1980s, which in turn spurred development of systems for accessing and archiving diagnostic scans as well as speech recognition and workflow management systems for reporting findings and recommendations to care teams.

Radiology is continuing to drive cutting-edge advancements in health care technology through AI. One clear sign of that is the huge increase in articles in medical publications about AI in radiology. In the October 2018 issue of European Radiology Experimental, Pesapane and colleagues reported that radiology-specific articles about AI increased from about 100 per year in 2008 to more than 700 per year by 2017.

Fear for the Future
In spite of their technological savvy, radiologists have been affected by the same fear of being displaced by machines that has rattled other professions. By 2015, AI algorithms were performing better than humans at certain tasks at the ImageNet Large Scale Visual Recognition Challenge, an annual competition begun in 2010 to evaluate algorithms for object detection and image classification. More algorithms using the same deep learning methods followed, with many demonstrating a high degree of accuracy in detecting lung nodules, breast lesions, intracranial bleeds, and other findings. Resulting headlines claiming results “better than radiologists” and “faster than radiologists” prompted fears of a near-future where diagnostic algorithms would take over the job of interpreting medical images produced by X-ray, CT, MRI, and other modalities.

Dire predictions from notable AI experts further fueled fear. In 2016, Geoffrey Hinton, CC, FRS, FRSC, who has been called “the godfather of deep learning,” discouraged medical students from choosing radiology as a profession, cast doubt on the career choices of radiology trainees, and alarmed practicing radiologists when he said deep learning would outperform humans within a decade. He stated unequivocally that “people should stop training radiologists now.” AI pioneer Andrew Ng, PhD, told The Economist that it may be easier to replace radiologists with machines than it would their executive assistants.

Tracking the Hype Cycle
Along with fear comes hype, now at its peak, according to the latest Gartner Hype Cycle. Hype has its upsides in increased enthusiasm, competition, funding, and progress of AI; it also carries the risk of a halt to those advances when results don’t match inflated expectations. As Facebook AI Research lab founder Yann LeCun, PhD, told IEEE Spectrum magazine in 2015, “AI has gone through a number of AI winters because people claimed things they couldn’t deliver.”

Even so, awareness of past disappointments and the risk itself can be good for the continued growth of AI, not only as a cautionary lesson but also as wisdom directing the industry toward a better understanding of the needs and challenges in health care—and the capabilities and limitations of the technology.

The Tempering Realities of Health Care
The fear and hype associated with AI elide the unique challenges of creating, training, deploying, and managing AI models for radiology, the size and complexity of the health care system, and the scope of work that radiologists perform. First, today’s single-task or “narrow AI” models focus on one finding on a single modality. You would need models for thousands of potential findings across multiple modalities in order to mimic the interpretative skills of radiologists.

Second, the early AI models are often brittle, meaning that they work well with data from a single hospital environment but falter when applied to different data at other facilities. In a study published in November 2018 in PLOS Medicine, researchers at the Mount Sinai Hospital and Icahn School of Medicine showed AI models’ performance in diagnosing pneumonia on chest X-rays was significantly lower using external data.

Third, radiologists do much more than interpret images. Among other responsibilities, they select and apply the best imaging modality and technique for each patient, perform interventional procedures, communicate findings and recommendations to treating physicians, participate in multidisciplinary settings such as tumor boards, teach, and conduct quality assurance. Also, while computers can be incredibly powerful in presenting decision support information and assisting in the radiology workflow, they cannot reproduce the uniquely human qualities of diagnostic reasoning, medical judgment, and empathy for understanding patient needs and preferences.

There are other thorny areas, including medicolegal liability, that have yet to be addressed. Even our comfort levels with technology come into play. As we see in commercial aviation, few people are willing to entrust their lives to autopilots and advanced cockpit avionics without highly trained pilots in command.

What’s needed is a scalable, collaborative, multidisciplinary approach that addresses the multitude of challenges involved. For example, developers need radiologists’ expertise to ensure that the AI models they create have clinical relevance, and radiologists need AI experts to help them understand the technology and its limitations. Beyond fear, hype, and hope, all stakeholders need to remain focused on the most effective ways to deliver specific and demonstrable clinical, business, and practical value.

A Range of Initiatives
The conversation in radiology has begun to shift toward how to integrate AI to improve diagnostic accuracy, provide decision support, enhance patient care and safety, increase efficiency, and reduce radiologist burnout.

Some radiologists are energized by the potential applications of the technology to diagnose and treat disease—the reasons they got into medicine in the first place. It’s clear that AI can—and, in fact, needs to—do a lot to enable physicians to handle the increasing demand for radiology services as the US population ages. It also needs to harness the vast amount of new imaging data generated daily to improve health care outcomes. The need is even greater in countries with existing shortages of radiologists, including the United Kingdom. The United States may also experience shortages within 10 years as today’s radiologists reach retirement age; radiology residency programs only recently reversed a multiyear decline in enrollments.

There are multiple AI initiatives engaging commercial, government, and health care industry organizations. One area involves integrating AI-powered tools into existing radiology workflows without requiring additional screens and mouse clicks. That includes enabling image characterization algorithms to work in the background to prioritize images with abnormal findings for prompt evaluation and provide clinical intelligence to document evidence-based follow-up recommendations. For example, the University of Rochester Medical Center in New York is studying the use of AI to prioritize CT exams with intracranial hemorrhage on the radiologist’s worklist and using data analytics with AI to ensure that patients receive their follow-up exams.

The FDA is establishing a new regulatory framework to support the use of AI technologies. It plans to launch a Software Precertification (Pre-Cert) Pilot Program to speed up the FDA clearance process, similar to TSA PreCheck.

Large academic centers, such as Massachusetts General Hospital and Brigham and Women’s Hospital’s Center for Clinical Data Science, both in Boston, and Stanford’s Center for Artificial Intelligence in Medicine & Imaging in California, also have launched programs to promote AI in radiology.

Technology vendors have created online marketplaces similar in concept to smartphone app stores, where physicians can easily access and subscribe to a growing number of AI models for diagnostic and workflow tasks. The FDA cleared the first such algorithm in the area of workflow optimization in August 2018. Created by Israeli developer Aidoc, the algorithm flags acute intracranial hemorrhage cases in head CTs to assist radiologists in workflow triage.

As it has in other fields, AI in radiology most likely will take over low-value, time-consuming, and repetitive tasks, and free time for more professionally fulfilling work including improving patient care through the integration of clinical and imaging information as well as increased interactions with clinical teams and patients.

A notable example of this in an unrelated field is in journalism. In 2014, the Associated Press started using algorithms to cover corporate earnings reports and later expanded that to college and minor league sports. Where reporters once feared that algorithms were primarily cost-cutting measures intended to replace them in a financially troubled industry, they found that AI instead automated the “grunt work.” AI freed reporters to focus on higher-value journalism and gave them powerful new tools for discovering important stories hidden in Big Data.

The Reality of Necessary Improvements
Because of its traditional role as the trendsetter for new clinical technology and its crucial role in diagnosis, treatment, and prognosis, radiology can model how AI will be deployed in the wider health care system. Radiologists can guide developers to consider the clinical context of algorithms and educate other physicians and administrators about the capabilities and limitations of the technology. Much work remains to realize the benefits, beginning with replacing fear, hope, and hype with realistic understanding and an unwavering focus on using AI to deliver value. But the certain reality is that we need to apply the advanced tools and systems we can build using AI to improve health care outcomes and reduce cost while discovering new ways to advance the practice of medicine.

— Woojin Kim, MD, is chief medical information officer at the Healthcare Division of Nuance Communications. He was a cofounder of Montage Healthcare Solutions, which was acquired by Nuance in 2016. He previously served as interim chief of division of musculoskeletal imaging, director of the Center for Translational Imaging Informatics, and chief of radiography at the Hospital of the University of Pennsylvania in Philadelphia. He is an active member of the ACR, RSNA, and SIIM.