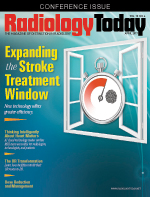 Hounsfield density of the cystic components of these parotid lesions ranged from 10 to 50. Solid and cystic lesions were not found outside of the parotid glands. There was also mild hypertrophy of the adenoid tonsils (lymphoid hyperplasia). In addition, relatively mild cervical chain lymph node enlargement was present bilaterally. Visualized lymph nodes did not meet pathologic lymphadenopathy by size criteria and were less prominent in size and extent than would be expected when considering infection or malignancy.

On imaging, BLEL may present as multiple solid, mixed solid and cystic, or cystic intraparotid lesions. Additionally, tonsillar hyperplasia may be present, and approximately 50% of patients will have associated mild cervical lymphadenopathy. In our case, BLEL was diagnosed by the presence of bilateral parotid gland enlargement with multiple multiseptate mixed solid and cystic intraparotid lesions and mild hypertrophy of the adenoid tonsils. Ultrasound imaging can demonstrate a wide spectrum of findings, ranging from multiple intraparotid simple cysts to mixed masses with predominantly solid components. Doppler interrogation typically demonstrates heterogeneous flow patterns within the lesions.2

Importantly, malignant transformation within parotid lesions has been reported and, though uncommon, if there is concern, recent studies suggest that dynamic contrast-enhanced MRI of the parotid glands can differentiate between malignant and benign parotid lesions.3 HAART has been shown to treat BLEL with lesion resolution occurring in most patients. BLELs can reappear, as in our case, if HAART therapy is terminated.

— Ryan Joyce, MD, is a radiology resident at UConn Health, University of Connecticut.

— Atul Kumar, MD, is a radiology resident at UConn Health.

— Mark Kane, MD, is the section head for ultrasonography and an assistant professor in radiology at UConn Health.