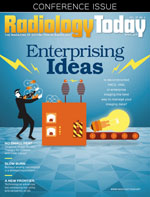 Pediatric clinicians have few treatment options for their young patients with chemotherapy-resistant liver cancer or for those who are not good candidates for surgery. That could change, however, with the introduction of transarterial radioembolization with Yttrium-90 (TARE-Y90) into the mix.

TARE-Y90 is a procedure that utilizes the arterial system to directly deliver radioactive microspheres to tumors as an additional treatment option to chemotherapy. The procedure, made possible via IR, allows much higher doses of radiation to be delivered directly to the tumor by using an image-guided catheter to carry radioactive microbeads through a tiny incision in the groin. Doctors say TARE-Y90 can be a safe, effective way to manage liver cancers in children, including hepatoblastoma, hepatocellular carcinoma, rhabdoid tumor of the liver, and undifferentiated embryonal sarcoma of the liver.

Encouraging Results
This procedure has been used in adult patients with liver cancer for 20 years, but study results recently published in Pediatric Blood and Cancer show that TARE-Y90 is effective and feasible for children with liver cancers. According to the study, “TARE-Y90 offers the ability to provide radiation doses to the tumor that cannot be delivered with external beam radiation due to potential organ toxicity.”

“My experience was that this was an established and very effective procedure for adults,” says Allison Aguado, MD, an interventional radiologist with Nemours/Alfred I. duPont Hospital for Children in Wilmington, Delaware. “It seemed to me that the procedure could be promising in young children.”

In this retrospective study of 10 patients, the decision to treat was made by a consensus of a multidisciplinary pediatric solid tumor team, which included medical oncologists, transplant surgeons, radiation oncologists, pathologists, and both diagnostic and interventional radiologists. Patients were considered eligible for TARE-Y90 treatment if they had no viable surgical options, were resistant to chemotherapy, and had preserved liver function. Median age at treatment was 5.5 years; six of 10 patients were age 6 or younger.

According to Aguado, who was the study’s lead author, liver cancer as a primary tumor is rare in children, with only about 150 cases of pediatric liver cancer per year. Primary malignant liver tumors account for approximately 1% to 2% of all childhood cancers, per the study. When children do present with liver cancer, however, Aguado says the most common liver cancers in children are hepatoblastoma and hepatocellular carcinoma. When chemotherapy, the first line of defense in cancer treatment, is ineffective, additional therapeutic options for children with unresectable hepatic malignancies are limited.

Results of this study found that TARE-Y90 is a safe and feasible alternative therapy for children with unresectable liver tumors. The procedure is found to decrease tumor size, allowing for surgical resection, serving as a less toxic palliative treatment, and even acting as a bridge to liver transplant.

“TARE-Y90 is an ideal treatment to use as an upfront therapy for patients with these cancers,” Aguado says.

To be considered a good candidate for TARE-Y90, children must have an established diagnosis of liver cancer, she says. They also need to have had imaging completed, no signs of liver failure, good performance status, and limited extrahepatic disease.

A Better Option
TARE-Y90 is commonly used in adults with unresectable primary or secondary liver malignancies, and has led to improved survival as well as success in downstaging patients prior to liver resection or transplantation. Use in children, however, is limited, due to low incidence of malignancies and the need for specialized equipment and technical expertise for its safe use.

“TARE-Y90 treatment requires extensive training,” Aguado says. “You need nuclear medicine licensing and certification to use this procedure with young patients, but it’s difficult to become an authorized user without an adult interventional radiology fellowship. Becoming an authorized user also requires additional training. Due to these factors, it’s difficult to get a TARE-Y90 program going for children.”

Using IR to apply radiation to the tumor internally, however, is safer for children than an external approach, Aguado says.

“Targeting tumors with radiation from the outside in—external beam radiation—is more dangerous in children,” she says. “The radiation is more scattered and less targeted, which puts the patient at risk for significant radiation toxicity of the liver. An internal method, like TARE-Y90, is safer. This is also a less toxic treatment for children with liver cancer than chemotherapy, leaving young patients with a better quality of life.”

Aguado has been performing this procedure on children since 2011, starting with 10 patients at Cincinnati Children’s Hospital Medical Center, where she previously worked. At Nemours, doctors, including Aguado, started using TARE-Y90 for young cancer patients whose cancer had relapsed or children who were near the end stages of their treatment. The goal, however, was to get to a point where the procedure was available to assist young liver cancer patients earlier in the progression of their disease.

“We were using TARE-Y90 as a salvage treatment for cancer that was unresponsive to chemotherapy,” she says. “Now we’re using this up front, at the beginning of cancer treatment. There are two young children who were cured with this treatment. We have data from salvage therapy patients. We’re now looking to use this as a curative treatment.”

The ultimate goal, Aguado says, is to shrink the tumor so surgeons can later remove it. Ideally, the patient will need a less extensive surgery or avoid the need for a transplant. Most recently, Aguado treated two patients at Nemours.

Success Story
One of those patients is Blakleigh Grace Lipe, a girl, now 5, from Murphysboro, Illinois. Her local pediatrician found a grapefruit-sized lump in her abdomen during a preschool physical in September 2017, and she was diagnosed with stage 3 hepatoblastoma, a malignant tumor in her liver. After two months of chemotherapy, the tumor remained, showing no reduction in size. Seeking alternatives, the child’s local oncologist referred her to Nemours for TARE-Y90.

“Her [local] doctors recommended that we see a nonpediatric radiologist, who would place [radioactive] beads into her liver,” says Lipe’s mother, Kasi Camden. “I didn’t want Blakleigh to be a guinea pig, but we were really stressed about whether she was going to make it any further.”

“Blakleigh presented as unresponsive to chemotherapy,” Aguado says. “And surgery would have been difficult, due to the size and location of the tumor.”

After visiting with doctors at Nemours, Lipe underwent a preprocedure angiogram and nuclear medicine study to make sure her lungs and internal organs could withstand the radioembolization. Yttrium-90 is a beta-emitting isotope with high-energy radiation traveling extremely short distances in tissue, with the ultimate goal of destroying the target tissue. In this case, the target was a large tumor in the liver. The radioactive beads are delivered via glass-based microspheres targeted at the tumor tissue, sparing surrounding healthy tissue from radiation exposure.

“The biggest problem, they kept saying, was that they didn’t want too many of the beads to go to her lungs,” Camden says.

Before TARE-Y90 can be performed, a detailed pretreatment angiogram is administered to assess blood flow to the liver, including blood flow to the tumor; the angiogram also assesses blood flow to the surrounding organs. While the liver receives most of its blood supply from the portal vein, liver tumors receive the bulk of their blood supply from the hepatic artery. Immediately following the pretreatment angiogram, each patient undergoes a nuclear medicine study to determine the amount of radiotracer that has accumulated in the lungs.

Lipe underwent TARE-Y90 treatment two weeks later, in December 2017. With the procedure, a catheter is inserted in an artery in the groin; fluoroscopy is the method of guidance. The catheter, traveling through hepatic arteries that supply blood to the tumor, acts as the delivery method for microspheres impregnated with Y90. Through this process, high doses of radiation are delivered directly to the tumor, while areas around the tumor are, for the most part, spared from radiation exposure.

“It’s important to find arteries that provide blood supply to the tumor in the liver,” Aguado says. “We then use the catheter to transfer the beads selectively to the tumor.”

The procedure was deemed a success.

“With TARE-Y90, the tumor size shrank by about 75%,” Aguado says, “making surgery easier and safer to perform. The remaining liver, or future liver remnant, also grew, which decreased the risk of post hepatectomy liver failure. In addition, her tumor marker (alpha fetoprotein) went down by about 90%.”

A conventional right hepatectomy was performed in January 2018 to remove the tumor. About six weeks of chemotherapy followed.

“Today, she is cancer-free,” Aguado says. “It’s the best outcome we could have expected.”

Hope for the Future
Aguado says she and her colleagues are hoping to use TARE-Y90 earlier in a young patient’s treatment process to facilitate curative therapy, rather than as a last resort course of treatment. She also hopes to see more patients able to undergo liver tumor resection rather than transplant.

Lipe’s success with TARE-Y90, as well as the case of another child who is cancer-free after undergoing the procedure, offers other young patients an option other than chemotherapy to treat liver cancer.

In Murphysboro, Illinois, there’s a 5-year-old who is now a part of medical history. Her success with TARE-Y90 gives hope to doctors and researchers who continue to seek options for children with inoperable or chemotherapy-resistant cancer.

“Knowing that this procedure can save other children gives people hope,” Camden says.