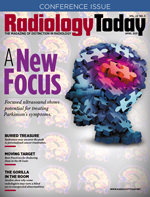 A clinical trial involving patients with Parkinson’s disease has revealed another step in the measured progression of applications for focused ultrasound, in this case using MR guidance to safely target the area of the brain that controls the main movement disorder features of this debilitating condition. Multidisciplinary researchers see this as a potentially viable, less invasive alternative for treatment earlier in a patient’s development of Parkinson’s, or in patients for whom surgery is not recommended due to age or other preexisting conditions.

The area of the brain at the focus of this trial, reported in December 2020 in the New England Journal of Medicine, is the subthalamic nucleus, the preferred target for treating Parkinson’s cardinal signs of tremor, bradykinesia (slowness of movement), and muscular rigidity. According to principal investigator José Obeso, MD, PhD, a professor of neurology at CEU San Pablo University and the director of the neuroscience center at the HM Puerta del Sur General Hospital (HM CINAC) in Madrid, Spain, the subthalamic nucleus plays a large role in the origin of motor features, making it a natural location for the application of high-intensity focused ultrasound.

“I think high-intensity focused ultrasound offers the chance to ascertain whether subthalamotomy (the preferred method for deep brain stimulation surgery and ablative procedures) could be applied earlier in the evolution of a patient’s Parkinson’s disease, for example, within the first five years after diagnosis, and improve midterm evolution of Parkinson’s disease,” Obeso says.

MR guidance is key to successfully targeting focused ultrasound to the area where ablation can result in the reduction or even drastic improvement of motor manifestations.

“It’s important to recognize that this is a state-of-the-art image-guided procedure,” says W. Jeffrey Elias, MD, an associate professor of neurosurgery and neurology at UVA Health in Charlottesville, Virginia. “There aren’t many procedures where you’re reaching into the brain and can have this kind of result. With imaging, you’re watching the procedure as it happens inside the brain. Imaging-guided procedures are the future.”

Elias collaborated with Obeso and his team at HM CINAC on the trial, which was designed to see whether patients with asymmetrical Parkinson’s symptoms could benefit from focused ultrasound subthalamotomy. Of the 40 enrolled patients, 27 were assigned to the procedure, while 13 were assigned a simulated treatment. Patients who received the focused ultrasound procedure saw greater improvement in symptoms than those who did not.

Of paramount importance during the study was the safety of the procedure. MR guidance was key to focusing the treatments, but there was still the matter of side effects, which in this case included unwanted muscle movements, muscle weakness, speech disturbances, and difficulty walking. While some side effects were temporary, six patients were still experiencing side effects one year after the procedure was performed.

“We’re seeing positive effects with subthalamotomy, but there are also more risks of side effects,” Elias says. “You’re targeting a ‘high rent’ neighborhood in the brain with this procedure. For this procedure to be a viable option for patients with Parkinson’s disease, we would have to redo the side effect profile. We’re in the early stages of this work so there’s room for improvement.”

Treatment Evolution
Treatment for Parkinson’s disease has evolved significantly over the past 50 years, Obeso says, since the introduction of levodopa, the most prescribed medication for the disease. Deep brain stimulation was the next highly impactful option, but that is an invasive procedure.

“Focused ultrasound is based in the essential pathophysiological characteristics that revitalized surgery for Parkinson’s disease and movement disorders and rests upon the experience acquired over the last 25 years with ablative and deep brain stimulation neurosurgical treatments,” he says.

Insightec’s Exablate Neuro focused ultrasound device, which was used in this trial, has played a role in the evolution of the technology. The company also helped to fund this study.

“We’ve already established Exablate Neuro focused ultrasound for the treatment of tremors in patients with Parkinson’s disease, and we’re now expanding the technology to help alleviate more motor symptoms,” says Rick Schallhorn, vice president of neurosurgery at Insightec. “Clinical investigation will help to open up the use of focused ultrasound to a greater set of patients.”

In 2004, the company’s Exablate Body device received FDA approval for use in the treatment of women with uterine fibroids. As word spread of the benefits of this noninvasive procedure, researchers began looking at its use for other conditions. In 2012, the FDA approved Exablate Body for use in patients with pain from bone metastases. Three years later, the Exablate Body system received FDA approval for the treatment of symptomatic uterine fibroids, with revised labeling to allow treatment in women who wish to maintain fertility and preserve their uterus.

During those years, clinicians saw potential for the use of focused ultrasound beyond its FDA-approved treatments and began looking at applications where the technology could help treat areas of the brain that control movement disorders from essential tremor to Parkinson’s disease. In 2018, research and findings resulted in FDA-approval of Exablate Neuro to treat essential tremor in patients who have not responded to medication.

“It’s a deliberate progression,” Elias says. “After essential tremor, the next logical step is to target areas of the brain that affect other symptoms of Parkinson’s disease. We’ve gone from the single symptom of tremors to addressing multiple symptoms.”

Cautious Progress
One of the premises for the use of focused ultrasound is the ability to provide Parkinson’s patients with a less invasive treatment option. However, researchers say the clinical community is not yet at a place where this can replace medication or surgical intervention.

“There are several circumstances when surgery is not the best option,” Obeso says. “These include people who have contraindications for a surgical procedure and, most importantly, those with asymmetrical but relatively severe motor features on one side. However, there are times when surgery is a better option, such as for patients who have overt bilateral symptomatology in whom a therapeutic benefit needs to be achieved as soon as possible in a generalized fashion.”

There’s also the matter of side effects from ablating an area of the brain. Obeso notes that while focused ultrasound is not an invasive surgical procedure and there is no brain penetration with electrodes, it is invasive in that ultrasound beams target and destroy tissue in the brain.

“Acute effects are frequent,” he says. “For instance, subthalamotomy can result in issues with equilibrium, gait defects, facial asymmetry, and involuntary movements. Most of these are transient, and our study shows a relatively small percentage of permanent and severe side effects at one year. Yet, the technique has ample room for improvement, and there is a learning curve.”

Elias adds, “If we’re looking for this technology to have a role in the treatment of symptoms of Parkinson’s disease, the onus is on us to lower the side effects. There are other alternatives, so we need to offer an option that is safe and secure.”

Perspective
Obeso says that the relatively high incidence of adverse events has been taken by some as a major hurdle to considering focused ultrasound for subthalamotomy. He notes, however, that when deep brain stimulation was first used, side effects were “abundant, severe, and sometimes associated with major permanent effects.” He adds, “Many of my colleagues tend to compare high-intensity focused ultrasound with the current state of the art for deep brain stimulation, without realizing high-intensity focused ultrasound still has a lot to improve and perfect.”

Parkinson’s disease specialist Joel S. Perlmutter, MD, the Elliot H. Stein Family Chair in neurology and a professor of radiology, neuroscience, and physical therapy at Washington University School of Medicine in St. Louis, puts the findings of this trial in perspective with all other Parkinson’s disease treatment options. He considers medication as a first-line treatment for Parkinson’s symptoms, then looks at alternatives when medication loses its efficacy.

“When medication stops providing long-lasting results or the patient starts experiencing bad side effects, such as dyskinesia symptoms that can be so severe that they interrupt function, these people respond well to deep brain stimulation,” Perlmutter says. “The advantage of deep brain stimulation is that if the patient’s condition changes, we can adjust the stimulation dose to the brain. If there are side effects, we can make adjustments. There’s no way to adjust the lesion created with focused ultrasound. You can only make the hole bigger.”

A downside to deep brain stimulation, however, is that it still involves two surgical procedures, in order to implant the electrodes and the neurostimulator, and comes with the inherent risks of hitting blood vessels or causing a stroke, he says. While focused ultrasound is considered less invasive, there’s still an aspect of the procedure that penetrates the brain.

Another concern Perlmutter has with focused ultrasound for subthalamotomy is that most Parkinson’s patients have issues on both sides of the body.

Finally, he says, focused ultrasound has a risk of interfering with the response to deep brain stimulation, which may be necessary later in the course of treatment when a Parkinson’s patient may begin to experience symptoms on both sides of the brain.

Fulfilling a Need
Among all the considerations for the best treatment of Parkinson’s disease symptoms, there is consensus that further research is required to fill a critical need for less invasive options for certain patients. Founder and chairman of the nonprofit Focused Ultrasound Foundation, Neal Kassell, MD, says there is a desire to quickly develop viable options for people with Parkinson’s.

“It’s about proving the technology,” he says. “If you have precision and accuracy with a noninvasive procedure in the brain, you can bring about a better quality of life for patients. Focused ultrasound is a rapid approach. Patients go into the machine and come out better. You can see that the treatment is working while you’re doing the procedure.”

The Charlottesville, Virginia, organization, which helped to fund the subthalamotomy trial, has a mission to accelerate the development of new applications of focused ultrasound and its widespread adoption as a standard of care. Kassell sees studies like this as good steps toward gathering evidence that will support further work in improving focused ultrasound for Parkinson’s and other disorders as well as creating greater adoption of the technology.

“Focused ultrasound is a highly disruptive technology,” he says. “It disrupts treatment paradigms. There’s always going to be resistance when that happens.”

Where there is consensus among those who work in Parkinson’s treatment and research is in the desire to find safe and effective options to alleviate, or even eliminate, the symptoms of this disease.

“The application and revitalization of focused ablation to treat a neurodegenerative disorder like Parkinson’s disease goes with considerable difficulty in a relatively ample sector of the neurological community,” Obeso says. “My colleagues tend to think that Parkinson’s disease will be stopped or cured molecularly, and I don’t disagree with the latter. However, we are far away from being able to apply that. Today, high-intensity focused ultrasound offers the opportunity of improving and extending quality of life for Parkinson’s disease patients for several years.”