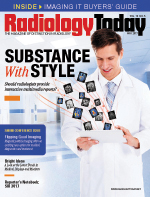 The dentate nucleus is a cluster of neurons, or nerve cells in the central nervous system that has a dentate—toothlike or serrated—edge. It is located within the deep white matter of each cerebellar hemisphere.

Discussion
Metronidazole is a nitroimidazole compound. It is an antimicrobial agent commonly used to treat a variety of anaerobic and protozoal infections. Side effects such as cerebellar syndrome and peripheral neuropathies have been linked to prolonged use of metronidazole. Neurologic signs that may occur as an untoward side effect of metronidazole are often related to the cumulative dose of the drug and the duration of treatment. Our patient received a total of 78 g of metronidazole intravenously and orally over a six-week period.

Ahmed et al initially described MIE in 1995. The exact incidence and underlying mechanism of MIE, which is reversible, remains unknown. MIE is postulated to be due to increased water content and reversible axonal edema as opposed to demyelination. Once the diagnosis is made and metronidazole is discontinued, the symptoms of MIE typically improve and eventually resolve over a period of several days to several weeks. Imaging findings of MIE include nonenhancing T2 and FLAIR hyperintensity, increased signal intensity on DWI, variable associated ADC values, and no mass effect. Abnormal hyperintensity on MRI is commonly noted in dentate nuclei of the cerebellum, dorsal pons, medulla, and splenium of the corpus callosum. Other entities that may resemble MIE lesions include Wernicke's encephalopathy, osmotic myelinolysis, demyelinating disease, methyl bromide intoxication, and sequela of heat stroke.

MIE is a rare entity but important to diagnose in the appropriate clinical setting, since early recognition and cessation of metronidazole is beneficial and therapeutic.