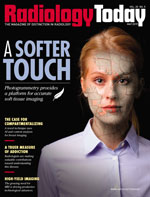 The Case for Compartmentalizing
By Beth W. Orenstein
Radiology Today
Vol. 20 No. 5 P. 14

A novel technique that uses AI and content analysis may be a way to reduce unnecessary biopsies.

As many as 60% of women who have screening mammograms will be called about an abnormal result at least once in 10 years, only to learn after additional imaging and, possibly, a biopsy that it was a false alarm; follow-up will show that they do not have breast cancer. Computer-aided detection has helped to improve the accuracy of mammographic findings on a first read, says Robin Shermis, MD, MPH, FACR, medical director of ProMedica Breast Care in Toledo, Ohio, and a member of Radiology Today’s editorial advisory board, but many women are still recalled because of abnormal findings on their mammograms.

In the United States, the recall rate is said to be more than 10%. The rate is slightly higher for women having their first mammogram, according to the ACR. Of those who are recalled, about 10% will undergo a biopsy and, of those, only approximately 30% turn out to be cancer, says Karen Drukker, PhD, a research associate professor in the department of radiology at the University of Chicago.

Biopsies cause anxiety, even if they turn out to be negative, Drukker says. Follow-up imaging and biopsies also add to the cost of care, she adds; researchers are constantly looking for ways to reduce unnecessary callbacks and the costs associated with them without missing any abnormal findings that should be pursued rigorously.

Drukker and colleagues at multiple breast imaging centers believe they may have found a novel technique that can help achieve those goals. The technique is called three-compartment breast (3CB) imaging. It was developed by a team led by John Shepherd, PhD, while he was at the University of California in San Francisco; Shepherd is currently with the University of Hawaii in Honolulu. The researchers recently published a study of the new approach, “Combined Benefit of Quantitative Three-Compartment Breast Image Analysis and Mammography Radiomics in the Classification of Breast Masses in a Clinical Data Set,” in Radiology. Drukker is a coauthor of the study, which found that, when combined with radiomics, 3CB has the potential to substantially reduce unnecessary recalls and boost the confidence of mammography readers’ interpretations.

Quantitative Comparisons
3CB is a dual-energy mammography technique that does not require a contrast agent and is easily implemented with minimal changes in digital mammography or digital breast tomosynthesis (DBT) workflow, Drukker says. It yields quantitative and reproducible pixel-by-pixel estimates of water, lipid, and protein thicknesses throughout the breast. The three quantitative compartments are calculated from the image attenuation at high and low energy by using a within-image phantom. To analyze the images, the identification of the appropriate mass center was inputted manually, but each mass was automatically segmented. Radiomic features of the mass were extracted from the low-energy mammograms and the compartment images of the mass and the tissue immediately surrounding it.

Water, lipid, and protein content can be used to help distinguish between benign and malignant tissue. For example, an increase in water could indicate angiogenesis—the production of new blood vessels and an early sign of a developing cancer; cancer is highly angiogenic. Previous studies have shown that invasive breast cancer has 20% less lipid and 50% more water content than normal breast tissue. Also, cancer cells require protein to thrive and spread.

For the study, the researchers acquired 2D dual-energy mammograms taken between 2013 and 2017 from 109 women who ranged in age from 31 to 85, with a mean age of 51. Each of the women underwent biopsy because her imaging showed breast masses that were suspicious or highly suggestive of a malignancy. Of these women’s masses, 35 were shown to be invasive cancers and 74 were benign.

The researchers compared the biopsy results with their method of combining 3CB analysis with mammography radiomics. They used an AI method developed by Maryellen L. Giger, PhD, and her team at the University of Chicago for use in computer-aided diagnosis of breast images. Giger’s AI method analyzes features and patterns in the images, some of which are difficult for the human eye to see. Results when using mammography radiomics alone, 3CB images alone, and combined mammography and 3CB image analysis were compared. The primary clinical performance metric was biopsy yield at maximum sensitivity.

The combined method of AI and 3CB performed the best. This method found 34 cancers, missing only one. Visualization alone had a PPV of 32%. With the researchers’ combined method, the PPV improved to 50%. The combined 3CB-radiomics method also had a 97% sensitivity rate.

From Technique to Tool
One benefit of this method, Drukker says, is that the patient is already receiving mammography and acquiring the additional information needed for the 3CB analysis requires only an additional 10% dose of radiation beyond standard mammographic views. For the information it yields, safety is not a major concern, she says. The computer analysis can be running in the background, she adds.

The investigators believe their results are very promising. Although it is small, “this study shows that radiomics together with 3CB has a potential performance value when it comes to determining whether to request a biopsy,” Giger says.

The study used 2D mammography. The researchers want to do a similar study using DBT or 3D mammography, which reduces the problem of overlapping breast tissue, something inherent in conventional mammography. Drukker believes that a tumor’s unique water-lipid-protein signature could prove to be even clearer with DBT.

The researchers also see potential for their 3CB-AI method in the screening population and would like to do more research in that area. “We haven’t tested this in the screening population or with normal mammograms yet—where there is nothing in the images suggestive of possible cancer,” Giger says. “We’ve only tested in images with either cancerous tumors or benign lesions.” A clinical reader study, similar to other studies they have conducted, is designed to test the performance of the user, ie, radiologist, in the conventional way vs that of the user with the conventional way plus the new technique.

“What we don’t have in this paper is the readers’ performance if they were using this system,” Giger says. “Our reported study shows how well the computer is performing; however, in clinical use you want to know how well the radiologist is performing using the new technique.”

The next study would help answer whether this combined method would help find more cancers if it were available at the screening stage. “And would it help us say, ‘The images appear normal. Come back for regular screening,’” Giger says. That could be similar to what’s happening with breast MRI, she adds. “Breast MRI was initially used for diagnostics,” she says, “but now breast MRI is being looked at for screening.” She notes that ultrasound is following a similar trajectory.

Drukker hopes the technique will eventually provide another tool in the breast imager’s arsenal for determining whether to call back women for biopsy and helping to find more cancers in early stages. Other researchers are working on similar or additional tools as well.

Potential Partnership
Breast imagers agree that the combined 3CB-radiomics method has great potential; however, they don’t think radiologists would ever feel comfortable relying on it alone. Stamatia Destounis, MD, FACR, FSBI, FAIUM, a radiologist specializing in breast imaging at Elizabeth Wende Breast Care in Rochester, New York, and a member of Radiology Today’s Editorial Advisory Board, says, “Anything that gives us the composition of a tumor is significant.” Measuring water, lipid, and protein in a tumor could be a way to more easily identify it, she says. Certainly, this information and the additional calculations helped the researchers to be more accurate when looking at suspicious masses and deciding whether they needed to be biopsied, Destounis says. However, she adds, “I don’t know that any radiologist at this time, as it is early in development of this technology, would feel comfortable using 3CB analysis only and not confirm findings with a biopsy.”

It’s impressive, she adds, that the researchers’ combined method improved the PPV and sensitivity of the readers, but it still missed one cancer. “It’s not perfect, but, with time and more research, it could be extremely accurate,” Destounis says.

Destounis also notes that the study was of women who already had known suspicious masses. The question is whether the combined method could be used in a screening population. “This is very early, and the results are very good, but we do need confirmation on a bigger scale that this technique would do well,” she says.

Shermis expresses similar sentiments about the 3CB-radiomics study. He says breast imagers are constantly looking for ways to help them better identify areas of concern and determine when they need to call women back or when they don’t; he adds that he would welcome research that addresses this issue.

“In breast imaging, you don’t want to cut corners,” Shermis says, “because every time you do, you get burned. The fear of missing a cancer or blowing something off or not pursing something is hard to drive out of a breast imager. By nature, we’re compulsive, and, for our patients’ sakes, it’s good that we are.”

Shermis adds that AI is an evolving science, and he doesn’t believe it will ever replace readers. “But it’s certainly going to change the dynamics and may allow us to staff differently or read differently,” he says. He’s convinced that, eventually, studies such as this will have “an impact on decision making and workflow” in breast imagers’ offices.

There’s a saying making the rounds in the industry: “AI is not going to replace the radiologist, but a radiologist using AI will replace a radiologist not using AI,” Giger says. The 3CB-radiomics study is one of many that could lend some credence to what everyone’s talking about, she notes.

“None of our computerized methods have ever been intended to replace radiologists,” Drukker adds. “Also, 3CB images could potentially be visualized for radiologist interpretation without any kind of AI, but we have not investigated the potential there yet.”