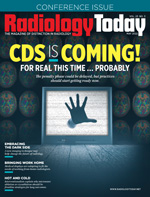 Anxiety about the future seems to be ubiquitous these days. If news outlets are to be believed, a collective sense of dread has become America’s default mode. In radiology, the wait for the penalty phase of the Centers for Medicare & Medicaid Services’ (CMS) appropriate use criteria (AUC) serves as a prime example of this mindset. One way to combat the fear of what’s around the corner, however, is to educate yourself. To that end, this issue’s cover feature, by Beth W. Orenstein, serves as a reminder to prepare for the penalty phase of CMS’ AUC requirements.

If you feel as though people have been talking about AUC since the Obama administration, well, you’re not wrong. Originally scheduled to take effect in January 2017, the AUC requirement has been pushed back several times, and may be again, but then again it may not. The most important detail, as far as radiology groups are concerned, is that ordering physicians will be required to use approved clinical decision support software to demonstrate that AUC were consulted when advanced imaging exams were ordered for Medicare patients. It’s important to note that radiology groups will have their reimbursement tied to whether the ordering physicians met the requirement. What could go wrong?

In other news this issue, we’re highlighting more hopeful trends. A new imaging technique that Keith Loria reports on shows promise for lung imaging. Dark-field imaging is an X-ray technique that uses the wave properties of light to visualize the structure of tissue with approximately 50 times less radiation than a typical CT scan, potentially capturing signs of pathology in tissue and organs much earlier than currently possible. The researchers who developed the technique—still in its research phase—believe it will eventually have applications in screening programs.

Loria also reports on the latest technology for home reading. The pandemic motivated a significant number of radiologists to read from home, and many of them have decided that it suits them. Turn to page 18 to find out what’s hot in home set-ups.

In interventional news, Orenstein takes a look at ablation techniques that are quickly becoming the treatment of preference for lung sarcomas. Traditionally, lung sarcomas have been treated with surgery and/or radiation, but the experts Orenstein speaks with advocate for microwave ablation or cryoablation as frontline treatments. Which treatment is optimal may depend on the location of the lesion that’s being treated, but the experts believe either method deserves strong consideration.