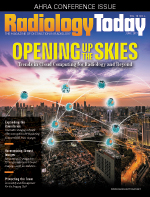 History
A 5-year-old child presented with a clinical history of acute quadriparesis. Additional symptoms included fever and malaise for several weeks prior to admission. There was no additional significant past medical history. Cerebrospinal fluid analysis revealed mild lymphocytic pleocytosis, elevated protein level, and a normal glucose level. MRI of the brain and cervical/thoracic spine was performed.

These areas appeared hypointense on T1-weighted (T1W) TSE sagittal imaging (Figure 2) and did not enhance on postcontrast (Gd) T1W imaging. MRI of the brain was normal, with the exception of hyperintensity in the medullary region (Figure 3).

Discussion
ADEM is a rare autoimmune disease marked by acute inflammation of the brain and spinal cord. ADEM also damages myelin and destroys white matter. It is typically triggered by a recent viral infection or may rarely occur after a vaccination. Gray matter, especially that of the basal ganglia, may also become involved. Isolated spinal involvement, as in this case, is considered rare.

Typically, ADEM presents in children or adolescents; patients are usually younger than 15 years of age, however, cases of ADEM have been reported in patients of all ages. Unlike other demyelinating diseases, such as multiple sclerosis or neuromyelitis optica, there is no female predilection for ADEM.

ADEM usually presents as a single flare-up, although, within the single episode, individual lesions may be of varying stages of evolution, with different lesions maturing over a number of weeks. In 10% of cases, relapse within the first three months is encountered. Unlike multiple sclerosis, symptoms are more systemic rather than focal and include fever, headache, decreased level of consciousness varying from lethargy to coma, seizures, and multifocal neurologic symptoms such as hemiparesis, cranial nerve palsies, and movement disorders.

ADEM is thought to occur from immune cross-reactivity to viral antigens, triggering a subsequent autoimmune attack on the central nervous system. In approximately 50% of confirmed cases, anti-MOG [myelin oligodendrocyte glycoprotein] immunoglobulin G antibodies can be identified.

CT imaging is not the ideal modality for demonstrating features of ADEM; however, CT may show indistinct regions of low density within the white matter and may demonstrate ring enhancement. MRI is the modality of choice for suspected ADEM demyelination, with the following features considered typical:

• T2: areas of high signal with surrounding edema typically situated in subcortical locations, thalami, and brainstem can also be involved;

• T1 C+ (Gd): punctate, ring, or arc enhancement (open ring sign) is often demonstrated along the leading edge of inflammation, but absence of enhancement does not exclude the diagnosis; and

• Diffusion weighted imaging (DWI): there can be peripherally restricted diffusion. The center of the lesion, although high on T2 and low on T1, does not have increased restriction on DWI, nor does it demonstrate absent signal on DWI as one would expect from a cyst; this is due to an increase in extracellular water in the region of demyelination.