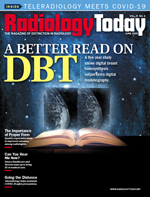 History
A 31-year-old woman presented to her primary care physician with a three-day history of new onset, moderate-intensity, upper back pain, which was exacerbated with movements of the head. The patient denied chest pain. Blood oxygen saturation was normal. Physical exam was noncontributory. On review of systems, the patient denied shortness of breath, fatigue or poor exercise tolerance, palpitations, or lightheadedness. She had no family history of cardiomyopathy. The only medication the patient was taking was an oral contraceptive. A chest X-ray revealed an enlarged cardiac silhouette, and the patient was referred to cardiology. However, four days later, the patient presented to the emergency department with worsening back pain. Her D-dimer level was elevated, and she was referred for a CT angiogram (CTA) of the chest.

Findings
Nongated CTA of the chest with IV contrast in axial, sagittal, and coronal planes demonstrated a 1-cm nonocclusive acute pulmonary embolus (PE) within the proximal left pulmonary artery, which was extending from a small patent ductus arteriosus (PDA), type C based on the Krichenko classification (Figures 1-6). The remainder of her pulmonary arterial tree was normal. The main pulmonary artery measured 30 mm in diameter at the level of the right main pulmonary artery and was at the upper limit of normal. There was no evidence of right heart strain.

After being treated for the PE with anticoagulation medication, the patient underwent a successful transcatheter PDA closure 12 months later. 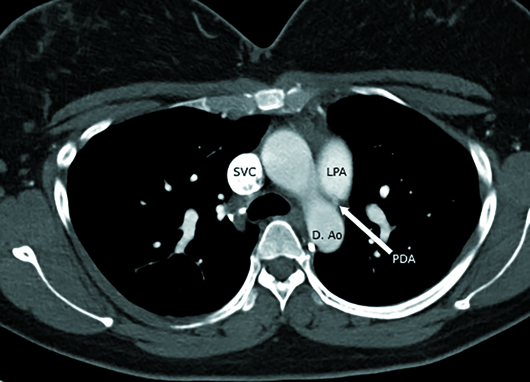 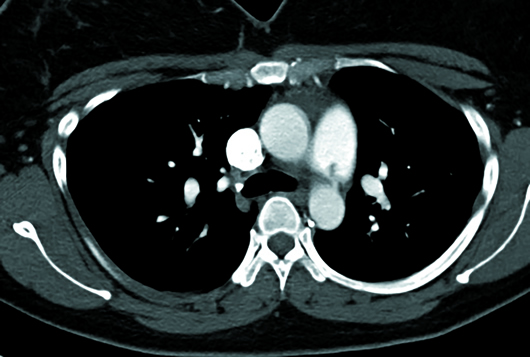 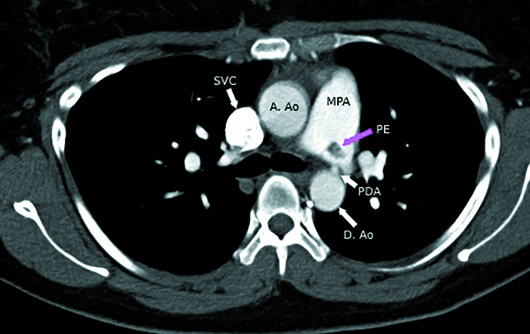 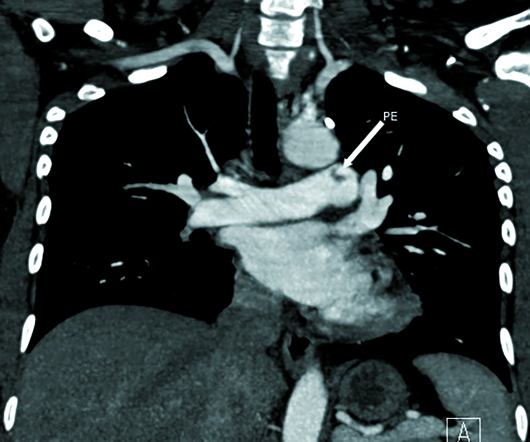 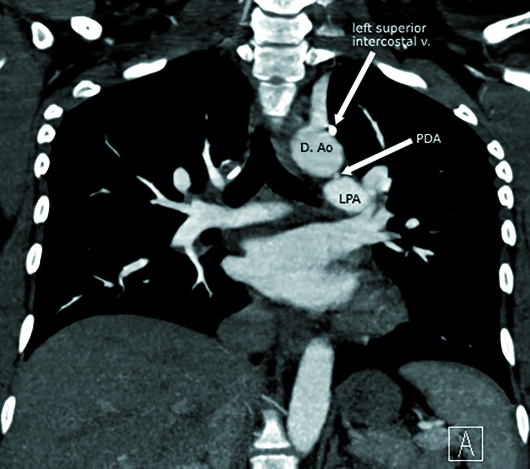 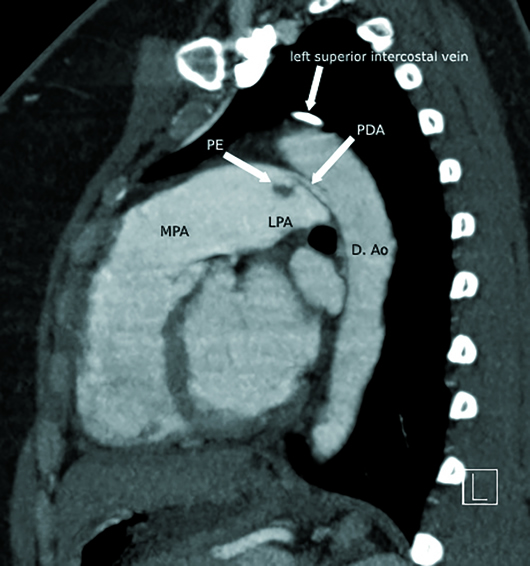 Discussion
In utero, the ductus arteriosus connects the roof of the pulmonary trunk or the proximal left pulmonary artery with the proximal descending thoracic aorta and conducts most of the blood directly from the right ventricle into the aorta, bypassing the lungs. Normal in utero circulation flows from the right atrium to the right ventricle, pulmonary trunk/left pulmonary artery, ductus arteriosus, proximal descending thoracic aorta, and systemic arterial circulation, in succession.

Normally, functional closure by vasoconstriction of smooth muscle of the ductus arteriosus occurs within 24 to 48 hours of life in term infants. This closure is stimulated by an increase in the partial pressure of oxygen. Over the next two to three weeks, intimal proliferation and fibrosis results in the formation of ligamentum arteriosum.

PDA occurs in approximately 1 in 2,000 full-term infants and is twice as common in women. There is a higher incidence of PDA among preterm infants. An isolated PDA is the third most common congenital heart anomaly, after ventricular septal defect and atrial septal defect.

PDA is usually diagnosed early in life. Subclinical PDA is a rare entity in adults and is typically diagnosed after the patient becomes symptomatic. Clinical manifestations of a PDA are determined by the degree of left-to-right shunting and resulting pulmonary and left heart volume overload.

Hemodynamically significant PDA classically produces a loud, continuous “machinelike” murmur, which is best heard within the left infraclavicular region. Large PDAs can lead to congestive heart failure, arrhythmias, and progressive pulmonary hypertension. If the pulmonary vascular resistance exceeds that of systemic circulation, the flow within the PDA reverses to right-to-left and causes Eisenmenger’s syndrome, an irreversible complication.

In adults, small or subclinical PDA can be discovered incidentally on CT. These usually cause relatively small left-to-right shunts which do not significantly overload the pulmonary vasculature. However, unrepaired PDAs in asymptomatic patients may eventually become clinically significant and can be exacerbated by pneumonia, COPD, ischemic heart disease, or aortic stenosis. PDAs are also associated with increased risk of infective endarteritis.

The presence of a pulmonary embolism in a patient with a PDA is rare, especially in the absence of any other risk factors for thromboembolism. Most of the cases reported have been secondary to infective endocarditis. D-dimer is a fibrin degradation product present in the blood after a blood clot is degraded by fibrinolysis. Normal D-dimer level has almost 100% negative predictive value for a PE.

Transesophageal and transthoracic echocardiography can be used as the initial confirmatory test when a PDA is suspected.

The most specific, but rarely seen, sign of a PDA on chest X-ray is two parallel lines due to mural calcification of the ductus, known as the “railroad track” sign. More commonly, chest X-rays demonstrate sequela of hemodynamically significant PDAs, such as cardiomegaly with predominantly left heart enlargement, obscuration of the aortopulmonary window, and features of pulmonary edema.

CT can establish the diagnosis of a PDA and is useful in planning of optimal treatment. PDA size is an important factor, as size criteria determine whether transcatheter closure may be performed. CT can also identify patients who require surgical correction because of a large PDA or because of an unfavorable PDA anatomy. Mural calcification of the ductus and adjacent aorta is important if surgical therapy is considered because calcification and atherosclerotic lesions make the ductus fragile, increasing the technical difficulty of the surgical procedure. CT can also help to exclude PDA mimickers such as a small diverticulum at the site of the ductus.

Ductus closure is indicated in adults with medium- and large-sized PDAs, even in asymptomatic cases, to minimize the risk of future complications. Indications for closure of small PDAs are less certain. For adults, nonsurgical transcatheter PDA closure is, whenever possible, the treatment of choice, with excellent clinical results.

— Alex Merkulov, MD, is an associate professor of radiology at UConn Health at the University of Connecticut.