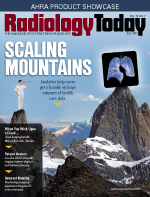 Findings
Transabdominal ultrasound was performed as the initial diagnostic examination. Both ovaries were normal in size and morphology. The anteverted uterus was not enlarged, symmetric in shape, and without evidence of an intrauterine gestational sac. Ultrasound imaging of the right adnexa revealed a gestational sac located within the right fallopian tube. This extrauterine gestational sac contained two fetal poles (Figure 1). Fetus A cardiac motion was observed at 143 bpm on M-mode (Figure 2).

Discussion
Ectopic pregnancy is the result of a flaw in human reproductive physiology that allows the fertilized ovum to implant and mature outside the uterine cavity, a situation that ultimately ends in the death of the fetus. Our case study focuses on a twin tubal ectopic pregnancy, which is a rare, potentially life-threatening condition that occurs in approximately 1 in 20,000 spontaneous pregnancies.

In the vast majority of cases, the ectopic implantation site is within a fallopian tube. Sites and frequencies of ectopic pregnancy are as follows:
• tubal ectopic: 93% to 97%;
• ovarian ectopic: rare 0.5% to 1%;
• cervical ectopic: rare <1%;
• site of previous Caesarian section scar: rare; and
• abdominal ectopic: rare ~1.4%.

The classic clinical presentation of this condition mimics singleton ectopic pregnancies and includes an initial period of amenorrhea followed by abdominal/pelvic pain and vaginal bleeding. Complication of this condition can result in a severe dilatation of the fallopian tube upon implantation, resulting in fallopian tube rupture and hemorrhagic shock. General mortality from ectopic pregnancy is currently around 0.5 per 100,000 live births, with tubal rupture accounting for up to 6% of all maternal deaths.

During an ectopic pregnancy, serum beta-hCG levels tend to increase at a slower rate compared with a normal pregnancy. The ultrasound exam should be performed both transabdominally and transvaginally. The transabdominal component provides a wider overview of the abdomen, whereas a transvaginal scan is important for diagnostic sensitivity. Ultrasound findings include identification of an extrauterine gestational sac and fetal pole, with or without cardiac activity, or a hyperechoic ring of tissue, called the "tubal" sign, with surrounding Doppler flow. Another finding is a suspicious mass moving separately from the ovary, called the "blob sign," in conjunction with positive serum beta-hCG. Additional suggestive findings may include intra-abdominal free fluid as well as a thin endometrial stripe.

An ectopic pregnancy can be managed medically with methotrexate or other abortive agents, if the patient is hemodynamically stable, or otherwise surgically with emergent laparoscopy, as tubal rupture rates are reported as high as 32% with a 2.5% increase for every 24-hour delay of treatment in higher risk patients.

— Allan Zhang, DO, is a radiology resident at UConn Health at the University of Connecticut.

— Karianne S. Silverman, MD, is assistant professor of obstetrics and gynecology at UConn Health at the University of Connecticut and St. Francis Medical Health Center.

— Patrick Svrcek, MD, is a medical student at UConn Health at the University of Connecticut.