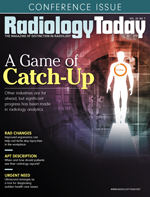 Other industries are far ahead, but significant progress has been made in radiology analytics.

But data must be readily accessible, transparent, understandable, and, importantly, controllable. Management of all of those aspects can be encased in one word: analytics. Analytics, Recht says, “allows us to increase efficiency, do research, and have accurate, clean data that are actionable.”

Carefully combed data provide each person within an organization the knowledge to better do their job. The underlying problem is that radiologic imaging generates enormous amounts of information related to both the clinical and business sides of health care. To tame that beast, health care professionals must engender strategic improvements in departmental performance—workflow—and costs.

“You can’t improve a process unless you can measure or quantitate it,” says Paul Chang, MD, a professor of radiology and vice chair of radiology informatics at the University of Chicago School of Medicine. “We are moving beyond the traditional perspective.”

“We are still behind other industries in leveraging business analytics, even though we have moved further ahead than where we were about five years ago,” he says.

Both administrators and clinicians, Chang says, better understand the current need for data-driven, rather than anecdotal, evidence. Although analytics is not a new idea, today’s health care administrators struggle mightily—and even successfully—to harness this horse.

“Ideas are easy, but execution is everything,” Recht says, paraphrasing one of his favorite maxims. He feels, however, that radiology has been somewhat slow to do that. As far as analytics are concerned, the problem he perceives is that the health care sector has been satisfied with retrospective data rather than real-time or prospective data.

“To establish more autonomy in radiology, we needed to have future-looking data to run an efficient department,” he explains.

Beyond Keeping Score
Previously, analytical data were essentially retrospective reviews of information derived from facilities’ RIS, EHR, and PACS. While these systems are valuable tools, much of the data proved to be cursory, eg, turnaround time reports. Chang uses two terms to describe the situation: “In radiology, we are still trying to understand the difference between a ‘dashboard’ and a ‘scorecard,’” he says. “That is why we are still behind other industries that use analytics.”

While a dashboard can be a real-time option, a scorecard is retrospective, Chang says. But many health care administrators who use those terms think they’re essentially the same. “This misunderstanding is indicative [of the current state of radiology analytics],” he adds.

To make his point, Chang uses an allegory that involves receiving a ticket for speeding. “Dashboards and scorecards depend on humans doing the right thing,” he explains. “But humans don’t always do the right thing. For example, my car’s speedometer, which is part of the car dashboard, says that I am about to go 100 miles an hour, and I decide to go ahead with that. The citation I then receive [from a police officer] is like a scorecard that explains why I was ticketed. But it still may not change my behavior.”

As such, Chang concludes that dependence on only dashboards and scorecards proves problematic because they rely on people doing the right thing. “We have made significant progress in the last five years with respect to analytics, but we have a longer way to go,” he says. “Other industries comprehend that you don’t put a human in a position that would enable them to fail, and that’s my argument. We need to move beyond human dependency on dashboards and scorecards. That is where AI comes in.”

This gets into a tricky area fraught with potential missteps; however, this is what other business sectors have recognized, Chang says. “Other industries have gone beyond the dashboards and the scorecards to do processing such as predictive analytics and machine learning, which are the modern tools of business-driven analytics.”

This shift reflects a movement away from pure analytics and toward data that are actionable.

“It means you’re going to do workflow orchestration that is data driven,” he says. “Dashboards and scorecards are only monitoring.”

Do the Right Thing
Chang underscores this point with a powerful statement: “Other industries are prospectively making it impossible for the human to commit an error.”

He says the radiology field still leaves it to humans to do too many things. Overburdened employees lead to clinical variability, workflow inefficiency, employee stress, and, ultimately, burnout. His answer to this complex and problematic situation is workflow orchestration.

“That’s the next level of analytics,” Chang says. “It will reduce variability. We are still too much human dependent.

“Place a governor on my speedometer so that I can’t speed,” he says. “We are so behind the banks, the military, Amazon—even the local pizza joint. Without exception, every other business sector has moved on beyond the simple scorecard and dashboard, beyond passive observation.”

Although health care appears to be a complex problem with no easy solution, Chang points out an ironic advantage. “While radiology, and health care in general, has been laggard, making slow progress while others speed far ahead, we’re actually in a good position,” he claims. “We don’t have to take the risks. We don’t have to do the guesswork. All we need to do is look at what other industries have done and bring those ideas into health care.”

While Chang’s description of analytics may seem like something from a science fiction movie scenario, it shouldn’t be startling. It’s simply about an evidence-driven, positive, and collaborative human/machine move toward improved workflow. The HAL 9000 will not sabotage the mission, so to speak. The human still pushes the buttons. In fact, analytics rely on human/machine collaboration.

“Analytics are only an augmentation to reduce variability and improve workflow,” Chang points out. “It will rid radiologists and technologists of the drone work.”

He strongly feels that next-generation analytics moving toward evidence-driven workflow orchestration will provide optimal human/machine collaboration. The machines will help alleviate much of the busywork, enabling humans to be better decision makers.

“I am very optimistic about this, even though we are only at the early stage,” he says.

Analytics in Action
Recht reports that he and colleagues have been involved in ongoing experiments with analytics. He says one of the first experimental experiences involved MRI.

“We needed to reorganize our MR department,” he begins. “At the time, we had two MR sites. One had four machines, and the other had one. We wondered which site could provide a better patient experience. Naturally, we thought it would be the site with four machines because, if one MR goes down, you have other machines to help you catch up.”

That turned out not to be the case. In fact, the opposite was true. “That confused me,” Recht says. “I investigated and found we were very careful how we scheduled patients on the four-machine site [30-, 45-, and 60-minute slots], and slots varied depending on the type of exam. But the technologists didn’t know what would happen later in the day, as far as which patients would be next and the patients downstream. It was a matter of schedule.”

From there, the researchers asked the active employees how they dealt with the circumstances. Essentially, they replied that they rolled with the flow. Unsurprisingly, this seemingly stress-reduced attitude proved insufficient.

“We realized we needed to provide them with data so that they could know exactly what was going on and help us track on-time performance,” Recht says. “As it turned out, the better tracking of on-time performance resulted in significant differences on how often we were on time, which contributed to a better patient experience.”

The exercise revealed how data impacted department engagement in scheduling patients, workflow, hours of operation, getting images to radiologists, even the number of radiologists and technologists needed. In the end, the investigation positively affected the experience of everyone concerned.

“Data allowed us to make better decisions,” he says. “For us, it led to process improvements in every area and with every modality.”

But he offers this caveat: The data must be clean, accurate, properly curated, transparent, real time, and accessible to all.

“It can’t be done with just a crystal report, which takes about four weeks to produce,” Recht warns. “By that time, you’ve forgotten your original question.”

A lingering problem is that within many health care facility infrastructures, IT is not designed to optimally support analytics or AI, but that will change as humans better understand data and its optimal usage, Chang says.

“We have to move in this direction because of the new environment of health care reform, shared-risk models, reimbursement, and capitation,” he says. “We have to be data driven because we are now finding ourselves having to be more competitive.”

New Developments
Still, in this brave new world, there will be the need for the human touch.

“Our technology architectures are designed for digital data, but that means the data still require the human to access and integrate—and for humans to be the interoperational agent among the data,” Chang says.

Even though that message is positive, Chang notes that it points to a technological problem: Advanced analytics require machines to talk to other machines.

“Right now, many systems aren’t designed that way,” he says. “Other industries have learned that machines are required to access other machines. Health care architecture remains fundamentally different. That’s another reason why we are 10 years behind.”

Recht opened a recent talk by playing Bob Dylan’s “The Times They Are a-Changin’,” featuring the lyric “please heed the call.” Advocates of analytics in radiology are being heard and heeded, and vendors are providing new software tools. As far as operational efficiency is concerned, analytics foster improved usage of imaging procedures and, in turn, shorter wait times for imaging exams and diagnoses, benefitting patients and clinicians. Specific improvement areas are immediately identified, reducing turnaround time to just one day. In turn, patients don’t have to wait anxiously by the phone for results.

For clinicians and technologists, stress is also reduced. A broader comprehension of industry systematics enables health care professionals to better serve both their own facilities and their communities via improved quality of service and organizational efficiency, reducing costs and enhancing the relationship between patients and the facility. This underscores how and why health care facilities and employees need to become more business savvy. Transition is relatively easy, as data collection value has already become apparent through RIS, EHRs, and PACS.

Recht sees analytics as the catalyst that moves the industry forward. He feels AI will assume a substantial role. You don’t just want to solve a problem, he says; you want to prevent the problem from occurring in the first place.

“It will generate predictions in radiology areas that will make us much more proactive,” Recht says. “We’re not doing that yet, but we are moving into a stage that will be exciting.”