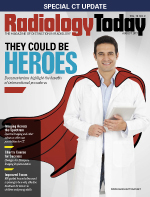 CT angiography (CTA) uses CT technology to examine a patient's blood vessels. It can detect stenosis, aneurysm, vascular trauma, and congenital anomalies of the vascular system. CTA provides the same sort of information as catheter angiography but without the need for an invasive procedure. It can also provide information that is not provided by catheter angiography, including images of the vessel wall and the vessel's relationship to other structures.

Even though the technology for CTA has been in place for many years, there are still questions about coding, documentation, bundling edits, and medical necessity. The biggest areas of concern are related to exams of the head and thorax.

Coding Guidelines
The CPT codes for CT do not list specific structures that must be evaluated. This is because each CT study is tailored for each patient's circumstances. In the case of a patient who is undergoing multiple CT scans or a follow-up scan, "the field of anatomy scanned may be less than the usual anatomic field for a particular body part" (Clinical Examples in Radiology, Fall 2014). This allows the radiologist to minimize the patient's radiation dose, and it does not affect the code assignment.

The CTA codes include examination of the arteries (CT arteriogram) and/or the veins (CT venogram) in a specific anatomic area. Only one unit of the CTA code should be assigned, even if the exam includes both the arteries and the veins.

CTA is performed using intravenous contrast. The CTA codes are defined as "with contrast material(s), including noncontrast images, if performed." This means that if a noncontrast scan is performed prior to contrast administration, it is included in the CTA study and is not separately reportable. According to CPT Assistant (August 2011), "Although in many circumstances, noncontrast imaging is not required as a prelude to CT angiography, any noncontrast imaging performed during the same session—whether for localization or diagnostic purposes—should not be separately reported." Because they are performed using contrast material, CTA studies require direct physician supervision.

CTA requires and includes 3D angiographic rendering. Clinical Examples in Radiology (Fall 2011) states, "Only when 3D is documented should the coder assign a computed tomographic angiography (CTA) code, as CTA requires 3D postprocessing." A study that includes only 2D postprocessing should be coded as a CT scan rather than a CTA.

In addition to the term 3D, other terms such as maximum intensity projection, shaded surface rendering, and volume rendering may also be used to describe 3D postprocessing. However, multiplanar reconstruction is a 2D postprocessing technique. (See Clinical Examples in Radiology, Fall 2013.)

The ACR Radiology Coding Source (May/June 2009) states that the imaging facility must keep a permanent archive of representative 3D images from the CTA. The ACR notes that "the axial data set from which 3D images are created is insufficient for the reporting of a CTA study."

CT and CTA on the Same Date of Service
In most cases, it is not appropriate to charge for a CT exam in conjunction with a CTA. There is some degree of overlap between the exams because data acquired during a CTA exam include images of nonvascular structures—bones, soft tissues, etc. These nonvascular structures must be eliminated from the images during postprocessing to create the images of the vessels.

According to Clinical Examples in Radiology (Summer 2008), performance of a CT and CTA on the same body area on the same day would be infrequent. It might occur, for example, when a CT scan shows a tumor in the pancreas, and a subsequent CTA is performed. In order for both exams to be billed, the CTA must involve a "new data acquisition." In other words, the patient must be scanned a second time, and a new data set must be acquired. In this situation, both exams may be charged.

In order to charge for both exams, there must be an order from the treating physician for both exams, both exams must be medically necessary, and both must be separately and completely documented.

CT/CTA Head
Head CT (70450, 70460, 70470) involves contiguous slices from the vertex of the skull to the foramen magnum, including the orbital roof. CT is the preferred initial test in acute head injury, severe headaches of sudden onset, and suspected intracranial hemorrhage, as well as for uncooperative patients.

CT is considered medically necessary for headache when it occurs after a head injury, suggesting the possibility of hemorrhage; when it is unusual in duration, frequency, or intensity, or does not respond to medical therapy; or when it is characterized by sudden onset and unusual severity, which may suggest the possibility of hemorrhage from aneurysm or arteriovenous malformation.

CTA of the head (70496) is often performed to evaluate for aneurysms in patients with known or suspected intracranial hemorrhage.

A CT perfusion scan is sometimes performed on the head as well. A CT cerebral perfusion study is a specialized protocol used primarily to evaluate stroke patients. The patient is given an intravenous bolus of contrast, and continuous imaging is performed while the contrast makes its first pass through the brain. Color-coded perfusion maps are created, and mean transit time is calculated. Based on the results of the cerebral perfusion study, the physician can determine the appropriate intervention.

CT cerebral perfusion studies are reported with Category III code 0042T. Under the Medicare Physician Fee Schedule, this code is classified as a physician service (PC/TC indicator 0) and has no technical component. It is contractor-priced (status C), meaning that each Medicare contractor can set coverage guidelines for the service. Under the Outpatient Prospective Payment System, code 0042T is a packaged service (status N).

While there are variations by facility, a common stroke protocol is CT head, CT perfusion, followed by CTA if the findings support the study. In this situation, only the CTA of the head and the perfusion study may be reported, but keep in mind that the facility will not receive separate payment for the perfusion study. On the physician side, there may be some payers who provide separate payment, but, unfortunately, this is rare and not widespread.

The biggest coding concern is that organizations—physician or facility—should not unbundle the CT and CTA and bill for both studies with a modifier unless the previously outlined criteria are clearly met. It should be a rare exception, and the documentation must clearly support both codes.

CT/CTA Thorax
Chest CT (71250, 71260, 71270) is performed to evaluate abnormalities of the lungs, mediastinum, pleura, and chest wall. It typically includes sequential slices obtained from the lung apices through the posterior costophrenic sulci. The exam may be extended to the adrenal glands if a diagnosis of primary bronchogenic carcinoma is known or suspected. Potential abnormalities of the pulmonary hilum may require contiguous sections (with contrast). A pulmonary nodule will require contiguous slices throughout the nodule (without contrast).

Code 71275 represents CTA of noncoronary chest vessels such as the aorta and pulmonary arteries. This study is frequently performed for pulmonary embolism (PE).

Documentation of CTA thorax is problematic for many organizations. Like other CTA codes, code 71275 requires 3D postprocessing. PE studies without 3D postprocessing should be reported as CT of the thorax (71250–71270).

Many times, organizations will set up a PE protocol in their ordering system. Technically, this could represent either a CT or a CTA, so it is critical that there is documentation within the organization that makes this clear to the referring physicians and all departmental staff. Most organizations do intend this to be a CTA, but there are still a few facilities that use CT as their default protocol. One other key point to note is that many payers have dictated they will provide payment for a CTA thorax but not a CT thorax for a PE evaluation. This is the first widespread occurrence of payers actually dictating protocols for an exam that did not require advance preauthorization. This statement is based on the assumption that the exam is being ordered through the emergency department vs a scheduled service that required precertification/preauthorization.

Summary
Ideally, the right exam is ordered, the facility performs what was ordered, the radiologist's dictation clearly defines what was performed, the exam is correctly coded, and appropriate reimbursement is provided the first time the claim is submitted. It sounds straightforward, and, arguably, it should be. In reality, it is not always that simple.

Take the time to evaluate the coding practices for these exams/protocols within your organization, to ensure appropriate orders, documentation, and coding. Compliance is always worth the time and effort.