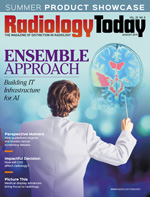 How will the CDS/AUC requirement affect radiology?

The clinical decision support (CDS)/authorized use criteria (AUC) requirement initiated by the Protecting Access to Medicare Act (PAMA) will soon take effect. Its impact will be felt in many health care areas, but radiology will be on the front lines. The legislation requires that external referring providers adhere to AUC before ordering the most advanced diagnostic imaging services such as MRI, PET, and CT to receive Medicare reimbursement. Specific regulations delineated by the Centers for Medicare & Medicaid Services (CMS) become effective on January 1, 2020. The rule is intended to reduce inappropriate or unnecessary imaging studies that have led to increased health care costs.

Overutilization Concerns
In large part, the requirement has to do with technology. Recent decades brought remarkable innovation and increased utilization of imaging technology. With it came increased health care costs, and overutilization became a major concern. The Medicare Payment Advisory Committee sounded an alarm.

Looking for a potentially workable alternative, members of Congress learned of a project in which different CMS convener groups implemented CDS and determined the impact on appropriateness and subsequent imaging utilization. Light bulbs switched on over many heads. “CMS did a great job in revealing what it learned from the project,” Hentel says.

It comes down to point-of-care feedback, delivered at order entry, says Cree Gaskin, MD, vice chair of informatics and director of musculoskeletal imaging and intervention at the University of Virginia. “It’s intended to assist providers determining which imaging test—or perhaps no test at all—is right for a particular patient in a specific scenario. It can even help with decisions to use contrast or not,” he says.

Available feedback can be tailored to patient age, gender, clinical setting, or ordering provider specialty, among other possibilities. “It helps providers get the right test the first time,” Gaskin says. Additional benefits include increased efficiency, cost reduction, and—perhaps most importantly—avoidance of unnecessary radiation, he adds.

“That’s implicit,” McEnery says. “Organizations have to contract with a separate company, as CDS technology for radiology is separate from EMR.”

Hentel agrees: “Integration as part of EMR or computerized health record entry involves new implementation.” He adds, however, web-based portals exist that allow users to type in information about a patient and imaging order, and the site will return decision support and even provide information about possible outcome. But he adds this caveat: “This easy way is not so easy at it appears. You’ll still have to type in the patient information every time.”

“A computer-based system enables guidance for the ordering providers,” McEnery says. As applied to radiology, CDS/AUC provides rules that promote guidance about examination appropriateness. “As a ‘for instance,’ a patient presents with back pain that has lasted for more than six months. Spine MRI is advisable,” he says. “The same can apply to other areas, such as pulmonary embolism. ‘Patient presents with the symptoms, such as shortness of breath, tachycardia, and laboratory values that indicate high levels of positive examination results.’ This contrasts with a patient who doesn’t present with symptoms. Yet a physician, for whatever reason, schedules a study. The CDS/AUC system would indicate that an examination is not appropriate.”

The overall purpose, McEnery says, is reduction of inappropriate studies to increase the value of services.

Apocalypse When?
January 1, 2020, looms large and appears fearsome. Adam Prater, MD, MPH, an assistant professor of radiology, imaging sciences, and emergency medicine and the director of stroke imaging and imaging informatics at Grady Memorial Hospital in Atlanta, describes the scramble: “Everyone knows it’s coming. How facilities choose to implement can have a large impact on daily workflow of ordering providers.”

This makes people sensitive to elements such as new workflow steps and extra clicks. Concerns involve possible increased burden; no one wants an implementation that will bring an additional set of overwhelming obligations for ordering providers, Prater says. But both Prater and McEnery point out that the aforementioned date is not a drop-dead, Apocalypse Now moment.

“It looks complicated, but it’s meant to help guide ordering providers,” Prater says. This means entities such as family doctors and treating physicians who can be considered, at some point in time, as referring physicians. “Automated support will help them,” Prater points out.

McEnery, too, is adamant that this is not a date to mark on the calendar with a grim reaper image. Consider 2020 as a test year. “Organizations must take full advantage of the education and testing year to avoid any unpleasant surprises in 2021,” he emphasizes.

Still, a year’s worth of breathing room shouldn’t foster complacency, he warns. The test-and-education year will entail full involvement and strong commitment. “By December 2020, organizations should be at the point where their systems work as planned,” McEnery says. “Year 2020 only means that we’re seeing if everything up and running is working as designed. The date means that information entered should be accurately interpreted by CDS mechanisms.”

If enterprises haven’t reached this level, then they need to watch out: Penalties will start in 2021. How severe? CMS indicates no reimbursement.

People Get Ready
PAMA was signed into law in 2014 and scheduled to begin in January 2017 … then 2018 … then 2020. Why the delays? The complex elements involved make the delay understandable. It was determined that existing systems—billing and image ordering—weren’t sufficiently robust to compensate for such a significant change. “The systems were ‘not ready for prime time,’” McEnery says. “The delay gave organizations time to determine how best to implement decisions and systems instead of rushing something out. CMS would rather delay than enact a rule that was half baked.”

“You don’t place something new into your practice and just turn it on,” Hentel adds. “We’re looking at a substantial culture change, one that will involve many decisions.”

Gaskin makes another important observation involving nuts-and-bolts issues. “More time was needed to deploy the developing technology across the United States,” he says. ”In 2017, it was simply too soon to expect everyone to have a useful solution in place.”

As problems with moving forward have been addressed, what are the next steps? What do enterprises need to do to get ready for 2021? “Whoever orders a study must be aware of AUC for whichever targeted clinical areas, and there are eight of them,” Hentel says. These include coronary artery disease (suspected or diagnosed), suspected pulmonary embolism, headache (traumatic and nontraumatic), hip pain, low back pain, shoulder pain, lung cancer (primary or metastatic, suspected or diagnosed), and cervical or neck pain.

Furthermore, Hentel says, any advanced imaging decision needs CDS exposure. “Decisions must comply with CDS criteria,” he says. This involves two “flavors,” so to speak. One involves total integration. By having an integrated health record system, organizations can integrate appropriate physician decision support into an extant ordering process. The other is nonintegration, wherein users must type information into the existing platform.

Prater takes user readiness even further. “Closely consider legal mandates,” he says. “Then you need to work with stakeholders to establish what individual needs entail.”

This is an important point because each organization’s needs are different. Prater concedes this can be a lengthy process, as it involves comprehensive evaluation of implemented EHRs, available vendors, and how a vendor product will interface and interact with the current EHR. But that’s just the beginning; the technical piece involves the resources providers have at their disposal. “After decisions are made, you need to determine how much help your IT team can allocate,” Prater says.

How Ready Is Radiology?
That sounds reasonable, but it becomes more difficult when the next step is considered. “Modifications need to be tailored to the tastes of stakeholders,” Prater says. “Engage them from the front end. Getting them involved isn’t easy.”

Meanwhile, organizations need to take full advantage of the educational and testing year of 2020 to ensure that their systems are working and clinicians are entering orders that foster decision support, McEnery says. “Organizations can document that such support took place, which will ensure that the decision submitted with that information is approved for payment,” he adds.

Some facilities can provide a comprehensive report about where they are, Hentel notes. Others haven’t even started to develop a strategy to deal with this looming issue, so there may be an apocalypse in some enterprises’ futures. “Some practices might be in for a rude awakening when 2021 hits,” he warns.

But the outlook isn’t as dire as it may sound, Hentel says. Many facilities, thanks to years of publicity, lead time, and delay, will be ready. Those that aren’t quite ready will likely get up to speed during 2020—a year without penalties. No penalty doesn’t translate into a free pass, however—organizations still must address existing challenges.

“One of those is overcoming the typical inertia that often accompanies change,” Hentel says. “Some facilities confronted with this specific change don’t even know what they’re supposed to do.” One reason is that many radiology practices get orders from multiple sources—and sometimes on paper—so making sure that providers’ orders result in the most appropriate consultation can be difficult. Some best practices and benchmarks have been identified, however. Hentel says that, in moving forward, enterprises must choose between an integrated or nonintegrated solution, or possibly a combination of the two.

“I think that’s what most of the largest enterprises will try to do,” he says. “Facilities must identify which AUC and which vendor can deliver what’s best suited to their strategy. CMS provides a list of vendors that can provide decision support. But, then, depending upon which provider you choose, they can have different criteria support. So, results can be impacted by vendor chosen.”

Thoughts on Change
Hentel says important considerations include the most appropriate CDS strategy (eg, integrated or nonintegrated, the best vendor to implement the chosen strategy, the difference among vendors, the workflow impact), what to do when an order comes in without appropriate CDS, and what steps to take if it has been decided that you won’t be reimbursed based on your treatment decision. He adds that the ACR provides helpful toolkits and information.

“ACR has been a big driver behind this,” McEnery says. “Radiologists want to interpret appropriately ordered studies. The biggest impact may be on the order providers. Potentially, their daily workflow could be interrupted.”

Prater says it’s hard to tell whether everyone is on board with CDS, as there a lot of opinions. “You’ll find that many facilities and stakeholders are satisfied, but that’s because they have the available resources and time,” he says.

Prater recalls his own experience. “Many factors in the current health care system come into play when you start tweaking imaging choices and how the choices are made,” he observes. “In my case at Grady, I didn’t have enough people available to help me. Three people are not enough to implement something like this. Questions remained about how it would function in a clinical environment. I witnessed a mismatch between expectations and what CDS implementation would provide and what would happen. The problem was that our EMR limited some of the demo features that we saw from the vendor.”

He adds that such issues can be overcome by adjustment and modification—trial and error—and networking with other facilities.

Some fear that implementation of CDS software will dictate how clinicians practice medicine. Indeed, there has been substantial discussion on this point. Hentel feels that this won’t be the case.

“Clinicians will still practice what they consider to be best medicine,” Hentel says. “At the end of the day, it’s still up to them to do what they feel is best for the patient in their care.”