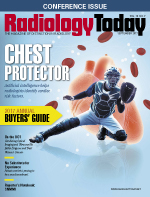 A technology that's most often associated with digital currency may soon change the way medical images are shared. Blockchain, which was initially used as the database for Bitcoin, is a method for logging transactions in a way that can't be changed. Because of this security and its ease of use, the technology offers the potential for faster, more efficient, and secure image exchange.

Data Safeguards
Chris Hafey, chief technology officer at NucleusHealth, says several factors make blockchain an effective exchange medium. One is its decentralized nature. Nobody owns a blockchain, and copies of it exist on many computers. To effectively change a ledger, identical changes would need to be made on every system that has a copy of it.

In addition, the cryptography used with blockchain is considered unbreakable. Two key aspects of this cryptography are hashing and digital signatures. Hashing creates a unique identifier for a set of data.

"What a hashing function does is take a piece of data of any length, and it creates a fixed-length number, maybe 40 bytes long, that represents that input data," Hafey says. "And it's a one-way transaction, so, given that original data set, you can produce a hash, but you can't produce the original data set from the hash. It takes big data and makes a small number representing it."

Hashing functions protect data integrity because any change, no matter how small, to the original data file will generate a different hash number. Essentially, Hafey says, hashing creates a virtual fingerprint for an image. Coupled with a digital signature, hashing ensures that images are shared securely.

Digital signatures are enabled with a public/private key. A user who wants to share an image signs it with a private key. The recipient can verify the signature with a public key that authenticates the sender.

"This is one of the key qualities of blockchain that gets people really excited," Hafey says. "Basically, it decentralizes the idea of identity management, where I—as an individual or a health care institution or provider—can have my own private key, which I manage, and I can sign messages so that anyone who receives the message can ensure that I signed it. So it allows people to check without having to go through a middleman."

Paradigm Shift
This type of data sharing model offers greater efficiency than third-party verification by certificate issuers, such as Verisign, or data clearinghouses, such as the RSNA Image Share Validation Program, but it will have to address a problem that the Image Share Validation Program was designed to mitigate: interoperability. There are many different blockchain technologies, most of which are open source, but some are proprietary, and features tend to vary. Although there may be a temptation among some vendors to promote a single blockchain, Hafey says most people in the industry believe that multiple blockchain technologies will be used, and they will need to interoperate.

One technology in particular that is drawing a lot of interest is Ethereum. Ethereum has a main net platform that anyone can use, and Hafey says many people are building products that run on it. In much the same way that the internet connects many intranets, Hafey thinks Ethereum will serve as a bridging application between users.

"I think Ethereum is going to be the common point," Hafey says. "Everyone will integrate with Ethereum first and foremost, so it will drive wave integration. And I think people already feel like that's what's going to happen and how it's going to end up being. I also think one of the key factors to encourage adoption is to get a mature technology base out so that people believe in it. And Ethereum seems to be it so I think it could happen quickly."

From a technological standpoint, Hafey says blockchain is not especially challenging to implement. He sees market awareness and education as the biggest hurdles to adoption, but notes that interest is high. He comoderated a Society for Imaging Informatics in Medicine webinar in May that explained some of the technology's basic features. Approximately 200 people logged in, and the moderators didn't have time to answer all of the questions.

As more commercial products build blockchain into their platforms, users will become more familiar with it. NucleusHealth is building blockchain into its image-sharing platform. Hafey says he also heard from one major health system that will only purchase from vendors who incorporate blockchain within the next three years. He adds that it's a fast-moving technology and could be rapidly adopted.

"I think there could be a very quick transformation in terms of blockchain," Hafey says. "It could be a lot of uptake over this next year or two or three. So in 2018 and 2019, you're likely going to see a lot of momentum and attention around it. I think it could happen very quickly, which is actually kind of surprising for health care because nothing moves quickly in health care."

The emergence of this technology may fundamentally change the way people think about data exchange, Hafey says. Up to now, people have had to trust that another human or several humans—such as IT administrators, outpatient center managers, or vendor software developers—along the chain of exchange have done their job.
Hafey believes that blockchain has the potential to change that trust model.

"There is a fundamental paradigm shift that needs to take place for people to truly get blockchain. It took me quite a while. I heard a lot of hype and a lot of excitement about it, but it's still in its early days," Hafey says. "There are many people who believe—and I'm actually one of them—that blockchain will have as big an impact on the world and society as the internet did, if not bigger. What blockchain allows us to do is have trust in technology and remove the human element, which can be corrupted and is fallible."