On the Case
By Krithika Srikanthan, MD, and Alex Merkulov, MD
Radiology Today
Vol. 20 No. 9 P. 26

History
A 45-year-old male with a past medical history of hyperlipidemia presented with a two-week history of right lower quadrant abdominal pain radiating to the right flank and occasional nausea. Pain was exacerbated by eating. The patient had no history of abdominal surgery. The patient denied fever or chills, dysuria, and hematuria. CT of the abdomen and pelvis with intravenous contrast was obtained.

Findings
Portal venous phase axial (Figures 1, 2, and 3) and coronal reformatted (Figures 4 and 5) CT images demonstrate a 4.8-cm geographic area of enhancement (blue arrow) in posterior segment IV of the liver associated with inflow from an aberrant right gastric vein within the enhancing area (orange arrow). The aberrant right gastric vein courses through the geographic area of enhancement without obstruction or displacement. The liver is of noncirrhotic morphology. 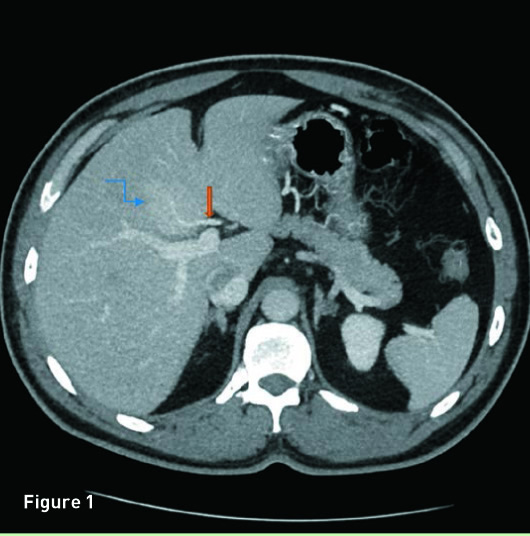 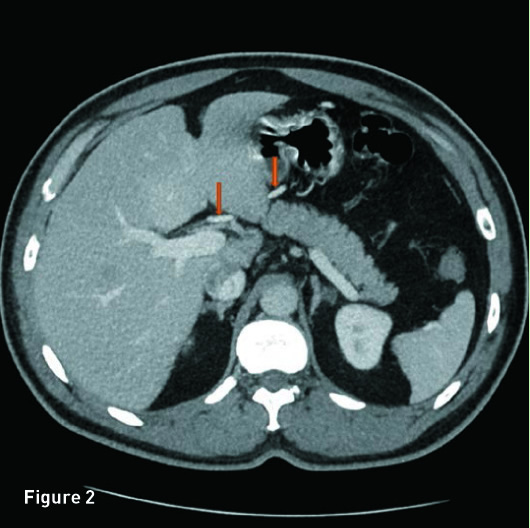 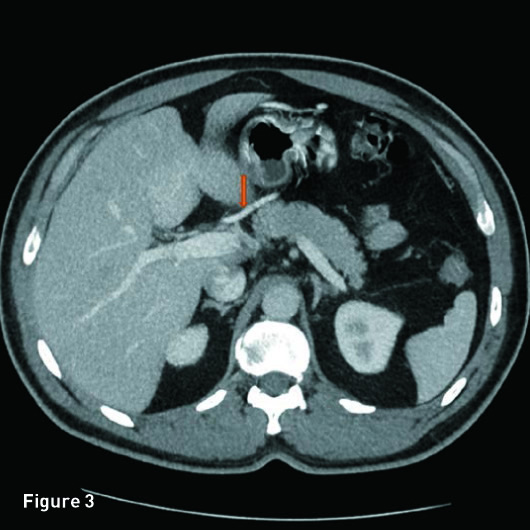 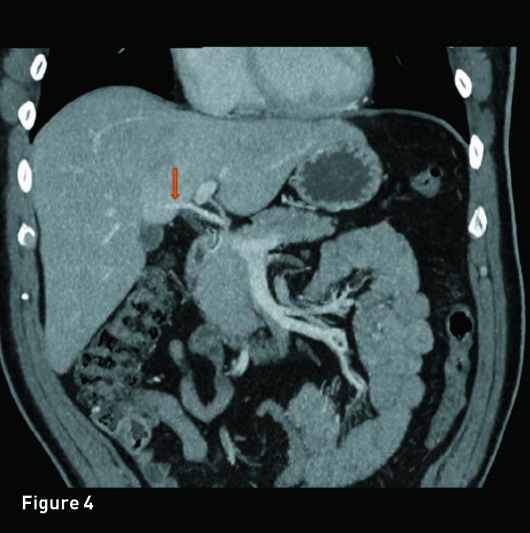 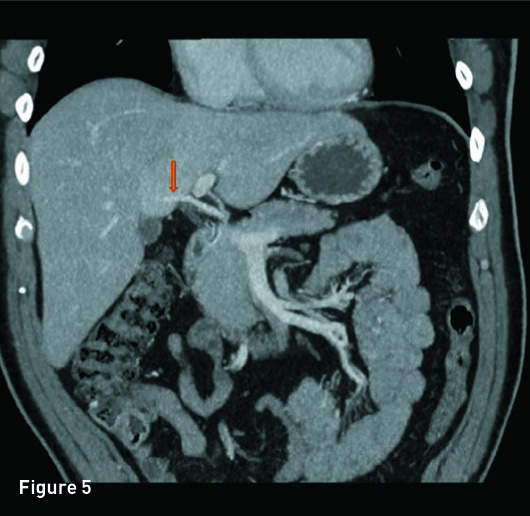 Discussion
Most of the liver has a dual blood supply with hepatopetal venous flow occurring through the portal venous system. However, areas of the subcapsular liver are supplied by aberrant hepatopetal venous flow, known as “third hepatic inflow.” Third hepatic inflow is composed of cholecystic, parabiliary, or epigastric-paraumbilical venous systems and can be a result of aberrant right or left gastric, cystic, paraumbilical, and caudate veins. Aberrant venous flow may result in focal areas of fatty deposition, fatty sparing, and perfusion changes, which result in the appearance of an enhancing pseudolesion, mimicking a focal hepatic lesion.

The appearance of pseudolesions on CT varies depending on the amount and timing of the inflow and presence or absence of focal metabolic alteration of hepatocytes. Blood entering the liver quickly via cholecystic veins creates an enhancing pseudolesion around the gallbladder during the arterial phase. Blood flowing through the parabiliary venous system enters slightly later, and the enhancing pseudolesion is located in segment IV on the arterioportal phase. Blood flowing through the epigastric-paraumbilical venous system reaches the liver during the late portal phase, and a pseudolesion is rarely observed.

In up to 24% of patients, gastric arteriography demonstrates drainage by an aberrant right gastric vein. This aberrant vessel is frequently observed to enter the area of a segment IV pseudolesion, as in this case, on contrast-enhanced CT. An aberrant right gastric vein can be a cause of focal steatosis, focal sparing in a fatty liver, or an early enhancing pseudolesion. Focal fat sparing in diffuse fatty liver is speculated to occur due to altered fatty acid and triglyceride levels associated with different compositions of hormones in the portal flow and third hepatic inflow.

— Krithika Srikanthan, MD, is a radiology resident at UCONN Health at the University of Connecticut.

— Alex Merkulov, MD, is an associate professor of radiology at UCONN Health.