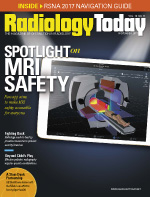 Khan Siddiqui, MD, is a Geisinger Health System-trained radiologist who founded the informatics fellowship program at the University of Maryland. He later cofounded Yottalook, which was later sold to Montage Healthcare; oversaw Microsoft's informatics engineering team; and eventually cofounded higi, a company dedicated to helping consumers understand and track their health care data.
In this Q&A, he offers insights on entering a nontraditional radiology career as well as the challenges he faced and lessons he learned from working in informatics and branching out into other industries.

How did you get started in software, and what led to your transition away from a traditional radiology career?
I was interested in technology and software, even in middle school in the early '80s. As part of that, I got to work on building exam management systems when I was in high school in Pakistan. That really gave me the first experience that could be used in academic settings to do exam management results reporting. I never saw software and coding as a career but rather as a tool that could be applied to any discipline.

I always had an interest in medicine and decided to go to medical school. I pretty much took my knowledge of software development and applied it to various different areas. Even in medical school in Pakistan, I was doing EMR data mining and automated disease modeling types of applications in the early 1990s. I took advantage of this to understand how the back end of the EMR really worked and how we do data mining and predictive modeling around it.

I then trained at NYU and Geisinger Health System and immediately got involved in a lot of different IT projects. One of my biggest passions was cardiac imaging, but I later decided to pursue informatics. By the time I decided to switch from cardiac imaging to informatics, it was too late to find a fellowship. I eventually got ahold of a list of board members at the Society of Computer Applications in Radiology [now the Society for Imaging Informatics in Medicine], and contacted Eliot Siegel, the chair at the Baltimore VA and vice chair at the University of Maryland. I asked him about an informatics fellowship and what I could do to convince him to start one at the University of Maryland. Within the next couple of days, he called back saying that he had dinner with the dean at the University of Maryland who loved my idea of starting an informatics fellowship.

I finally met Eliot at RSNA in Chicago that year, and he told me that I would have to come to the University of Maryland to start the program and run it. So, I started the informatics fellowship program and built the whole curriculum for it.

One day, I got a call about building medical imaging strategy at Microsoft. I did not think it was for me. The head of engineering reached out to me, and I met him and he talked about Microsoft's vision. I still did not want to take the job because I was trying to build my academic career, but in 2008 I went to Seattle twice, once for [the American Radium Society conference], and they finally convinced me to be a part of the team.

How did you transfer from working for Microsoft to starting your own company?
First of all, the way I think about issues is really focusing on problems first. My brain doesn't work by starting with an idea and just implementing that. I always start with the problem and start thinking about the problem, and the solution becomes something that could be a business of its own.

When we started Yottalook, it was really about solving the problem of how radiologists today do reference checks of the information they get for imaging. After realizing Google didn't index its medical content, I wanted to solve this problem and work with companies like Lippincott, etc, to make sure there was proper access to index these images and access to peer-reviewed images with real content coming in. This was important because, for example, everyone at the University of Maryland was using Google to reference-check images.

My last year at Microsoft, the leadership asked me to look at their PHR [personal health record], HealthVault, to see why people were not using it. So, I spent some time understanding the consumer aspect of it. There was a grant submitted that did some experiments on consumer health behavior, and the work I had done with the Xbox also gave me insight into how we could get people to engage with the PHR. I built a plan around this to help Microsoft solve this problem regarding health care engagement.

The other fundamental thing I learned is that to be successful, you always must figure out scale first for a problem you are trying to solve, especially if you are trying to make it a business. Unless you figure out how to scale the project, it will only be a great experiment that you did. I later decided that I needed to go do this on my own, and I met with a private equity firm in Chicago that also had interest around building a health consumer engagement network. We connected, and the rest is history.

Also, we currently do episodic health care—the patient comes in, we see them, and then we have nothing to do with the patient. So, HealthVault was trying to bridge that "between-the-care" gap by trying to get people engaged in health care and turn episodic care into continuous care. The question then became, "How do we incentivize and motivate people to do this?"

It became pretty obvious that if social determinants are such a big deal, then the data outside of health care are important for health care also. So how do you bring what I call ambient data—data that are generated between the episodes of care—back into care practice so health care providers can make better decisions on patient populations? This is what higi wanted to solve.

We then saw that retail channels are places that every human in the United States visits—grocery stores, pharmacies—approximately 1.6 times per week, way more frequently than they go to see their doctors. I figured this would be the place to start. But how do we engage in retail environments with people?

We saw the blood pressure machines sitting in the corner and thought about what could happen if that data were being tracked. Seventy million people use these machines per year, so even if only one-fourth of them converted to using the higi machine, that was still a huge number.

What were the challenges you faced in doing things that weren't on the clinical side? What were some of the skills or challenges you faced when you were seeking out extra opportunities?
Really, every aspect of it was difficult. When I was trying to get financing, I found that it required a lot more funding than I expected. From there, I had to learn and figure out every aspect to higi, and I had to learn certain processes and try things out. If I failed, I had to do it quickly and try something else. You name it, and it was a challenge to figure it out.

I think you need to have an attitude of always being the learner. I had no idea about manufacturing. When I had to build a kiosk for higi, I had to learn what manufacturing is, who to deal with, figure out the supply chain, how to best cut costs on manufacturing, best practices, and regulatory hurdles. You have to be humble about accepting what you don't know and finding the right people and the right connections who can educate you. That is key in my mind—I call it the "look-it-up" attitude.

People are also afraid to try. You don't know if you will succeed or fail unless you try. I do 10 things, and nine out of 10 of them fail. I get paid for the one thing that works. We have done so many things in higi that never worked, but without trying it, we would never know if it was going to work or not. So, before anything, you need that kind of attitude to be able to explore things you are not comfortable with or do not know.

The other thing is that if you are trying to innovate, you will only do that at the edge of experience. If you are sitting in radiology reading day-to-day stuff, you have pretty much built a herd mentality and think the same thing that everybody else thinks. So, it becomes really hard to innovate and come up with new ideas. But, when you are at the edge of your experience, you are bringing in other ideas that are not the conventional norm or ideas that you do not know the answers to. It becomes important to partner with engaging people that do not have the same background and do not think the same way you do because that is what accelerates innovation and problem solving.

— José Morey, MD, is a senior medical scientist for IBM and a visiting assistant professor in the department of radiology and medical imaging at the University of Virginia.

— Justine Kemp is an MD/MBA candidate at the Tulane University School of Medicine and AB Freeman School of Business in New Orleans.