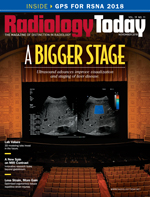 Women's Imaging: The Time Is Now for the USPSTF to Reevaluate DBT Efficacy
By Nila H. Alsheik, MD
Radiology Today
Vol. 19 No. 11 P. 34

Radiologists and facilities nationwide recognize digital breast tomosynthesis (DBT) as the clinically proven gold standard of care for breast cancer screening. Data consistently demonstrate that DBT results in superior patient outcomes as compared with 2D screening mammography. Despite this industrywide agreement, DBT has yet to receive positive endorsement from the US Preventive Services Task Force (USPSTF).

The body of evidence showing that DBT is more effective and efficient than 2D mammography alone is extensive. Headlines touting the results of studies that have found DBT to outperform its counterpart regularly grace radiology publications. One such study, recently published in Academic Radiology, includes a set of research findings that helps solidify this stance.

The study found that, among women recalled for further testing, those who were screened with DBT had a streamlined diagnostic workflow, as demonstrated by decreased downstream utilization of diagnostic mammography, faster time to biopsy, and faster time to final diagnostic resolution. Additionally, DBT recall rates were lower at sites with greater than 75% DBT screen utilization, compared with hybrid screening environments utilizing greater combinations of 2D screening mammography. Also of note, the study found recall rates were lower and cancer detection rates higher for DBT compared with 2D mammography across all breast density categories.

New Guidelines Needed
Despite this evidence, the USPSTF maintains an insufficient rating in the current USPSTF Breast Cancer Screening Guidelines for assessing the benefits of DBT as a primary screening method or even as an adjunct screening tool for women with dense breasts.

In the rapidly evolving world of breast imaging and given the recent pace of dense breast legislation, these guidelines are outdated. The aforementioned Academic Radiology study directly addressed the USPSTF's evidence gap, negating a pillar of the Task Force's insufficient rating. The study contains the largest number of DBT exams ever analyzed in a single study—nearly 325,000—with one-year follow-up with linkages to internal health system tumor registries. The analysis directly addressed the USPSTF's evidence gap, as it found DBT increased both sensitivity (92% vs 89.7%) and specificity (91.5% vs 89.5%) when compared with digital mammography—across breast density, age, race, and lifetime risk profiles for breast cancer.

Furthermore, the current USPSTF guidelines are based on studies largely performed with mammography equipment from the 1970s. The resulting guidance recommends screening for women aged 50 to 74 years, and it gives a "C" rating to breast cancer screening for women aged 40 to 49 years. However, a recent study published in Breast Cancer Research and Treatment found widespread implementation of DBT could actually reduce recall rates enough to justify screening women in their 40s.

With an ever-growing body of evidence supporting DBT and directly challenging the USPSTF's guidelines, perhaps it is time for the Task Force to reevaluate its recommendations. Early detection allows for earlier stage at diagnosis, when breast cancers are easier to treat. It is difficult to reconcile the annualized death rate for breast cancer in the United States of 40,000 cases per year with the lack of USPSTF support for DBT.

As the Academic Radiology study suggested, the ideal balance between reduced recall rates and cancer detection rate is achieved in facilities that have converted to complete or near-complete DBT utilization. Facilities and radiologists must educate patients on the benefits of DBT and advocate for its ongoing adoption. Many of the payer gaps previously serving as a barrier to utilization have now been eliminated for approximately 85% of women. Nine states mandate insurer coverage, and all the major insurance providers offer this benefit to their policyholders.