History
A 35-year-old man presented to urology to plan his scheduled vasectomy. He and his partner welcomed a pair of twin girls seven months prior. During his appointment, he reported a right testicular mass which he noticed approximately two weeks prior. He had been accidently kicked in the groin by his 4-year-old nephew, and the subsequent soreness brought his attention to the area. He had no voiding symptoms. He was referred for a scrotal ultrasound (US). 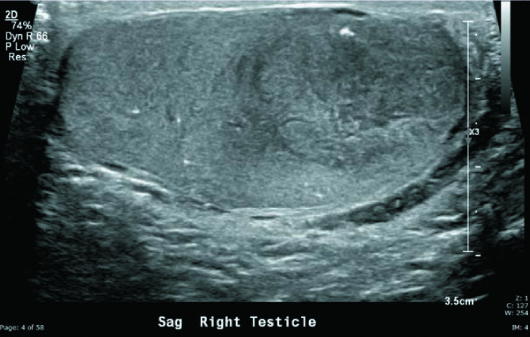 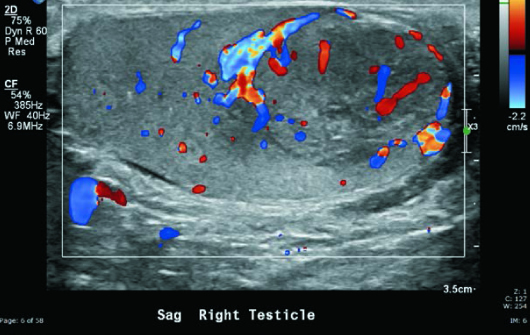 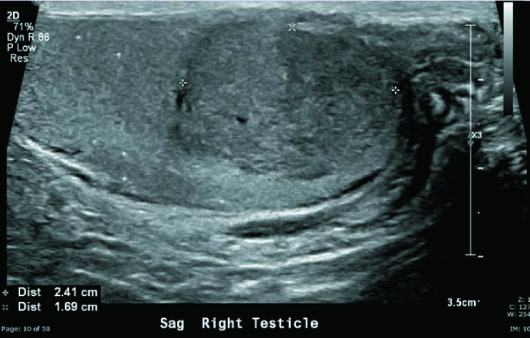 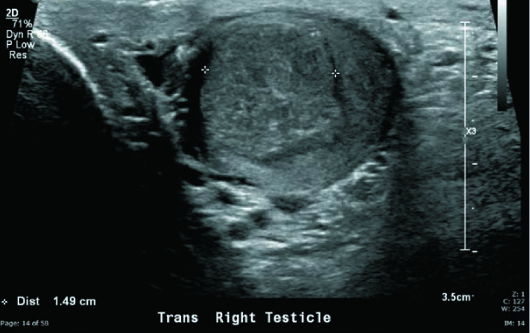 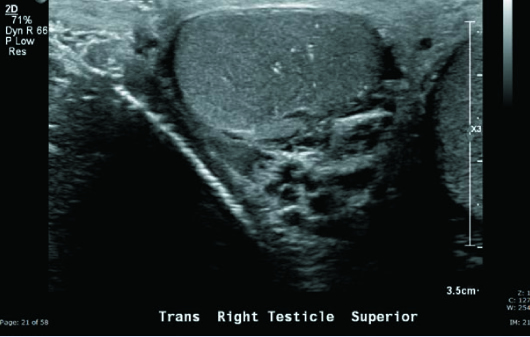 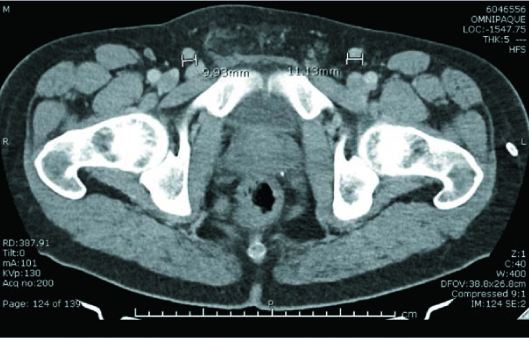 Discussion
Testicular cancer is the most common tumor in young adult men, with the majority of cases occurring between 15 and 35 years of age. Risk factors for testicular cancer include cryptorchidism, family history, and infertility.

In men older than 60, non-Hodgkin lymphoma is the most common testicular malignancy and carries a poor prognosis. Age is the most helpful discriminator for testicular lymphoma.

Controversy remains regarding the association of microlithiasis and testicular malignancy. Testicular microlithiasis is present in 5% of asymptomatic men aged 18 to 35 years and is characterized by calcifications in the seminiferous tubules of the testicular parenchyma.

Testicular cancer is staged using the TNMS (tumor, lymph node, metastasis, serum tumor marker) system. The clinical stage is determined based on physical, imaging, and laboratory testing. Patients are classified as having stage 1 disease if the tumor is limited to the testis, epididymis, spermatic cord, or scrotal skin. Clinical stage 2 disease is limited to retroperitoneal lymph nodes. Clinical stage 3 disease involves regional lymph nodes with moderately elevated tumor markers or distant nodal or visceral sites. The pathologic stage is determined on the basis of histologic evaluation of the resected tissue.

The T stage refers to the local extent of the tumor and is determined on the basis of pathologic analysis after orchiectomy. Because of venous and lymphatic drainage pathways, retroperitoneal lymph nodes are the initial landing station for testicular cancers and are considered regional and reported using the N stage. Lymphadenopathy in the supraclavicular region, chest, and pelvis is distant metastatic disease and reported as M stage. The most common sites of solid organ metastatic disease are the lungs, liver, brain, and bone. S stage refers to serum tumor markers associated with testicular cancer. Most testicular cancers that secrete tumor markers are NSGCTs, and 85% of NSGCTs will secrete at least one tumor marker. The three important tumor markers are AFP, HCG, and LDH.

Testicular cancer is initially treated with orchiectomy. The patient may then undergo active surveillance, chemotherapy, radiation therapy, or retroperitoneal lymph node resection, depending primarily on the clinical stage.

— Michelle J. Romero, MD, is an attending radiologist at Radiology Associates of Hartford in Connecticut.