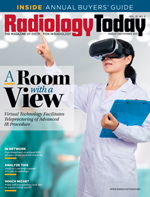 History
A 69-year-old asymptomatic woman with a past medical history of coronary artery disease, Addison disease, hypothyroidism, and lupus presented to radiology for a screening mammogram in June 2020, revealing a new-since-2019, left breast craniocaudal (CC) view, anterior depth, slightly medial to the nipple line asymmetry of equal density. Her recent physical breast examination was within normal limits. She was referred for diagnostic left breast mammography and a targeted ultrasound.

Findings
Screening full-field CC view mammography from 2019 was BI-RADS category 2: benign with typically benign calcifications (Figure 1). A new indeterminate CC view medial anterior depth asymmetry was identified on screening mammography in July 2020 (Figure 2). On subsequent diagnostic mammography, the CC view 1.2 cm equal density asymmetry persisted on spot compression, was not associated with suspicious calcifications (Figure 3), and was not associated with a focal lesion on targeted ultrasound. This asymmetry was categorized as BI-RADS category 3: probably benign; diagnostic mammography was recommended for follow-up in six months. On follow-up diagnostic mammography in April 2021, the previously noted anterior depth medial equal density asymmetry demonstrated an interval increase in size to 1.8 cm in long axis (Figures 4 and 5) and correlated with an 11:00 1.7 X 1.1 cm parallel nonshadowing hyperechoic lesion with a central nearly isoechoic component on ultrasound (Figures 6 and 7). An ultrasound guided biopsy was recommended, and the patient underwent the procedure using a 14-gauge spring-loaded needle (Figure 7). On pathology, the histologic and histochemical findings were consistent with amyloidosis. Rare minute foci of plasma cell infiltration and occasional foci of calcification were noted in association with amyloid deposition; no mammary epithelial elements were identified. Thioflavin T and Congo red stains were confirmatory. The systemic workup for amyloidosis, including serum and urine electrophoresis, is pending. 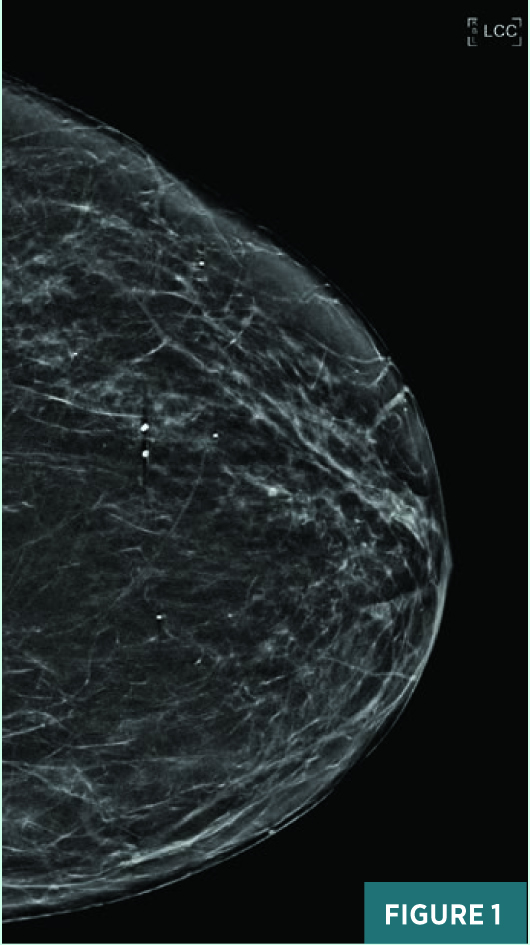 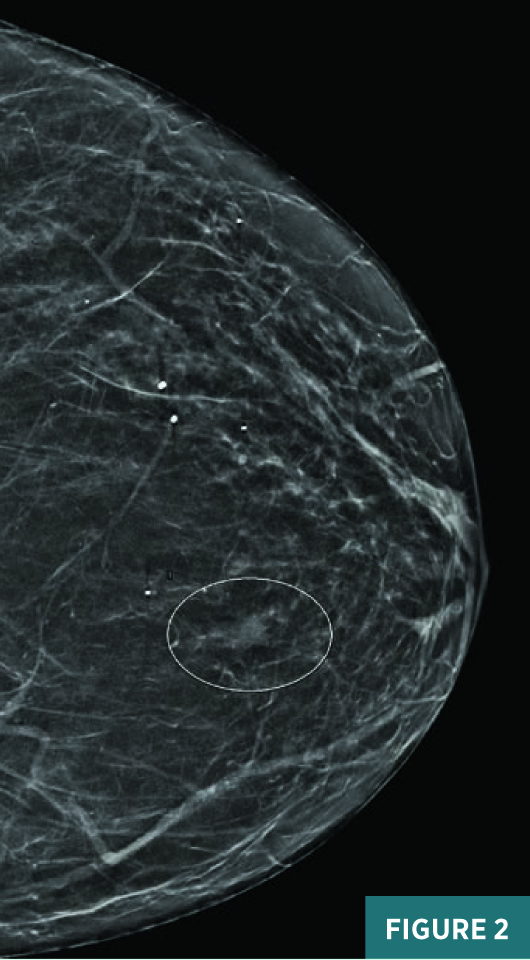 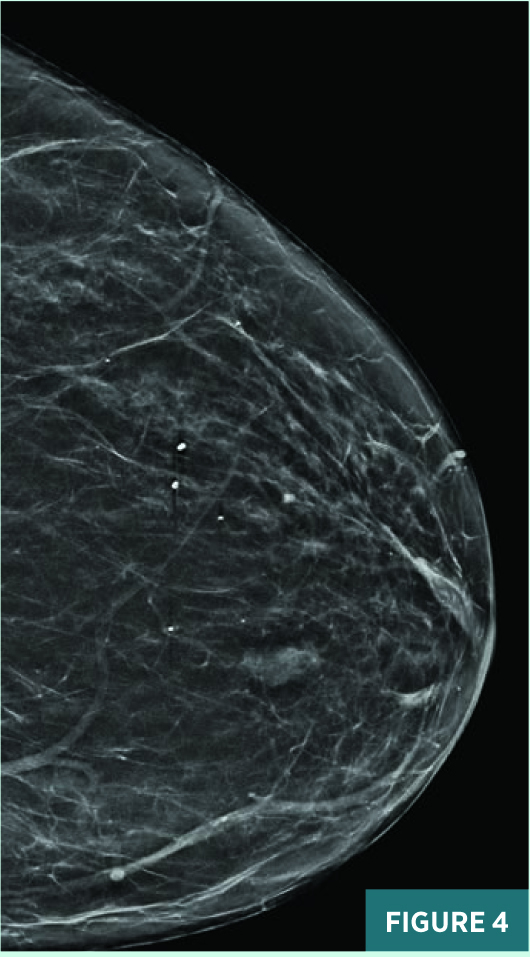 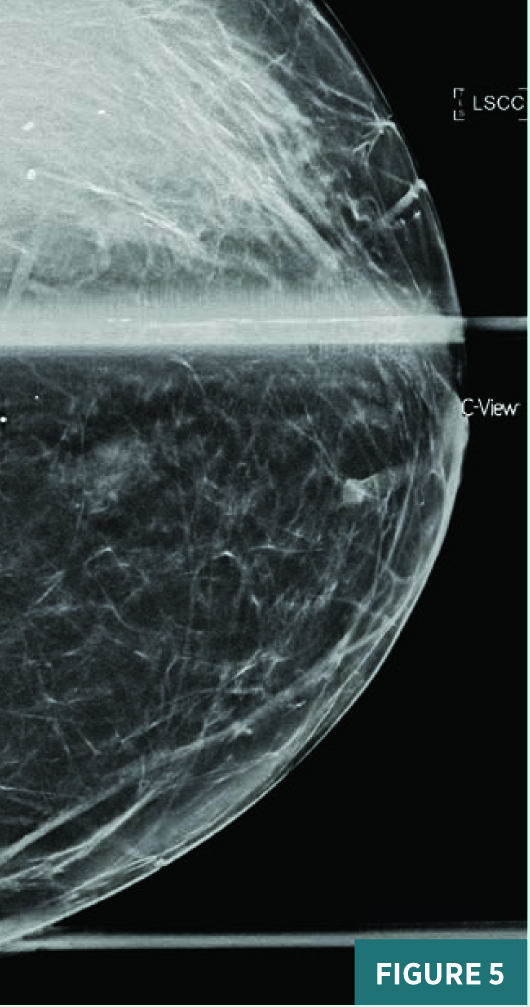 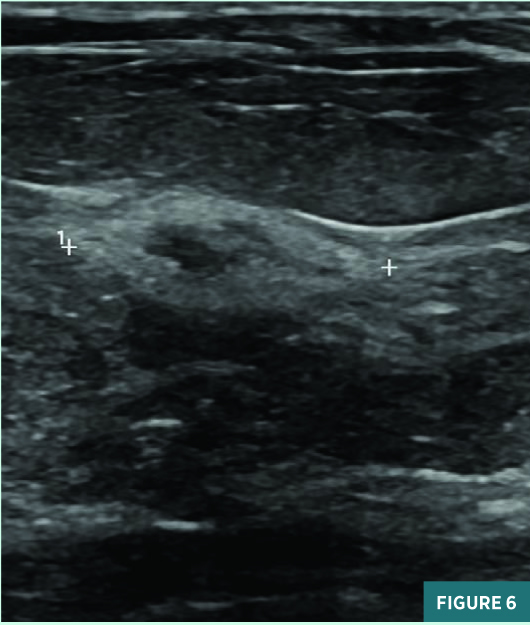 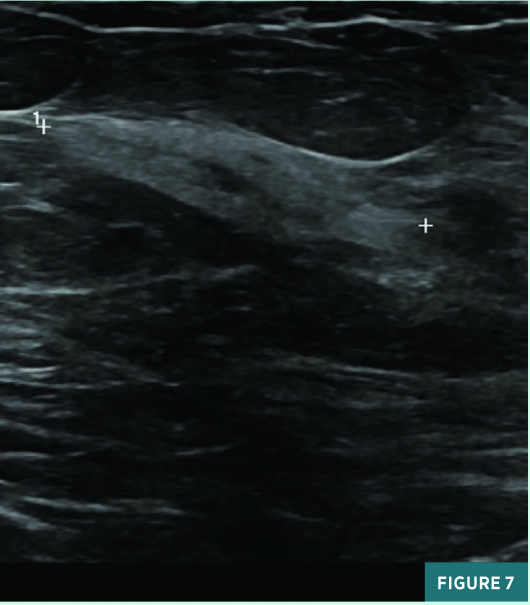 Diagnosis
Amyloidosis of the breast.

Discussion
Amyloidosis is characterized by extracellular deposition of different protein materials in a beta-pleated sheet architecture. Amyloidosis may be systemic, eg, affecting several organs and systems, or localized to one organ. More than 31 amyloid proteins have been described, the most common being AL protein, containing light-chain immunoglobulin, AA protein, which derives from a precursor protein of the liver, and amyloid-beta, which is part of the brain plaques in Alzheimer's disease.

There are systemic (primary) and localized forms of amyloid deposition in the breast. In primary form, breast involvement occurs in patients with systemic disease and in association with nonmalignant diseases such as multiple myeloma, plasmacytosis, and rheumatoid arthritis. In the localized form, the disease is confined only to the breast.

Primary amyloidosis of the breast occurs predominantly in elderly women, with some women presenting with palpable masses. Localized breast amyloidosis is frequently seen in postmenopausal women and is commonly of the amyloid light-chain type (usually kappa light-chain). The clinical presentation is usually a painless solitary breast mass that may show calcifications on mammography, raising the suspicion for breast cancer.

On pathology, the biopsied breast mass, which is sometimes referred to as an amyloidoma, is composed of amyloid deposits that are found predominantly around the ducts and blood vessels. Amyloid protein accumulation in perivascular, periductal, and intralobular areas in the breast causes a foreign body reaction and focal calcium accumulation. Breast amyloidosis has typical features and may be confirmed by a Congo red stain and immunohistochemistry.

In the literature, some authors have described breast amyloidosis as a distinct entity, while others have reported it in association with nonmalignant and malignant entities. It has been related to breast cancer and also described as being associated with hematologic disorders of the breast such as mucosa-associated lymphoid tissue lymphoma, chronic lymphoid leukemia, marginal zone lymphoma, and diffuse large B-cell lymphoma.

On mammography, an amyloidoma can present as a solitary mass with or without microcalcifications. Ultrasound findings are nonspecific, with hyperechoic and hypoechoic masses reported in the literature.

When a breast amyloidosis diagnosis is made, it is mandatory to rule out a hematologic disorder and systemic involvement. The primary treatment method in primary breast amyloidosis is surgical excision. Diagnostic mammographic follow-up should be considered postoperatively at six, 12, and 24 months.

—  Alex Merkulov, MD, is an associate professor of radiology at UConn Health at the University of Connecticut.