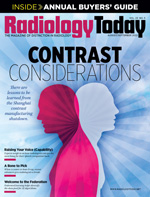 Supply-chain issues are everywhere. From microchips to baby formula to lumber, shortages have seemingly become the norm rather than the exception over the past couple of years.

Few industries have been spared, including radiology. For just one example, consider supply-chain fluctuations in medical isotopes that are used daily in tens of thousands of procedures.

The most recent notable example came early in 2022, when the Petten High Flux Reactor (HFR), a nuclear research reactor in Petten, the Netherlands, saw its first scheduled operating cycle of the year canceled unexpectedly due to a water leak in its cooling system. HFR supplies about 60% of European demand and 30% of worldwide demand of critical medical isotopes, including molybdenum-99, lutetium-177, and other critical isotopes.

If the pain of that shutdown was not ultimately felt at a local level by medical institutions, it was only because their supplier found ways to mitigate the supply shortage. Other aging research reactors around the world were called on to help pick up some of the slack, and suppliers worked to make ends meet until HFR restarted on March 17.

The biggest difference in isotope supply-chain issues compared with other industries, however, is that the concerns are not new, nor have they been particularly exacerbated by the COVID-19 pandemic. Rather, they have been an ongoing concern for years, as the world’s nuclear research reactors age and potentially near the end of their operational lifetime.

When that time arrives, what is next? And even if those reactors live longer than some modest estimates, what can be done to shore up supply, particularly in the United States where there are no such major reactors to supply these critical isotopes?

Nuclear fusion technology could play a key role in answering those questions.

Fusion vs Fission
Nuclear fission is a reaction in which a uranium-235 nucleus absorbs an extra neutron that quickly breaks it into two smaller nuclei while releasing a large amount of energy and excess neutrons. Most nuclear reactors around the world are used specifically for producing that energy, as it is transformed into electricity.

Isotopes, including molybdenum-99, are mostly an irrelevant byproduct of fission. But HFR is one of a half-dozen reactors around the world, all of them in the eastern hemisphere, that are specifically designed for the production of medical isotopes.

Fusion is much the opposite of fission, in that it is a reaction in which two nuclei are combined to form one heavier nucleus. The process releases even more energy than fission plus neutrons. For example, fusion is what powers the sun and the stars. And, for decades, physicists and scientists have been working to make controlled fusion a reality. With increased interest in decarbonization around the world, momentum continues to build in making affordable nuclear fusion power a reality.

In the meantime, some fusion technology companies are working to utilize the neutrons resulting from fusion in other near-term applications, including providing a reliable domestic source of medical isotopes.

Several companies have received financial resources from the government in recent years, and combined with private investments are working to develop new methods for molybdenum-99 production that does not rely on reactors or highly enriched uranium.

For example, NorthStar Medical Radioisotopes, in Beloit, Wisconsin, is currently producing molybdenum-99 using two different processes, one that involves no uranium and one that involves using particle accelerators.

SHINE Technologies, in Janesville, Wisconsin, is working to complete construction on a 43,000-squarefoot facility dedicated solely to producing molybdenum-99 and other medical isotopes. Powerful fusion neutron generators will target a low-enriched uranium solution to produce molybdenum-99. The large-scale production facility is scheduled to go online by late 2023 and is slated to feature eight fusion systems, which could give it the capacity to supply about one-third of the world’s current demand for molybdenum-99.

A Safer, Cleaner, More Reliable Option
The molybdenum-99 produced from fusion-induced reactions is the exact same as that produced through fission; fusion-driven isotopes represent a plug-and-play replacement for fission-based products. As a bonus, the excess neutrons created can be used to produce other isotopes, such as lutetium-177, which is an emerging cancer treatment isotope.

Where fusion can change the game when it comes to the production of these isotopes is in providing a domestic option in the United States—one that is safer and cleaner, and bolsters the supply chain overall.

In terms of safety, the use of low-enriched uranium eliminates the need to use high-enriched uranium that is commonly tied to the use of nuclear weapons, especially as it pertains to public perception, and is difficult to license for security reasons.

The use of a fusion-driven aqueous uranium target in the production of medical isotopes also has the potential to drastically reduce waste. Each fission reaction, even within isotope-dedicated research reactors, only generates about 6% of the reaction products in the form of molybdenum-99. Much of the rest of the process winds up being wasteful. Conversely, utilizing an aqueous target allows the uranium to be fully recycled and used again and again.

Additionally, the logistics of transporting isotopes from the eastern hemisphere to the United States is a wasteful process. Molybdenum-99, for example, has a halflife of 66 hours. An isotope’s half-life is the amount of time it takes for half of it to decay. The 66-hour half-life means not only can molybdenum-99 not be stockpiled for later use, however much is produced, half of that will be left over after a little more than 21/2 days. Consider the time from when an isotope is produced to when it arrives in the United States and then is sent on to a medical facility, and much of that half-life is simply wasted in transit.

Having dedicated isotope production facilities in the United States means more of these valuable resources will find their way to medical facilities—and ultimately patients—in a more efficient timeframe. Combine that with stifling the aforementioned supply chain woes that come with relying solely on aging reactors on the other side of the world, and there’s potential for a drastic transformation in medical isotope production.

— Ross Radel is the chief technical officer of SHINE Technologies.