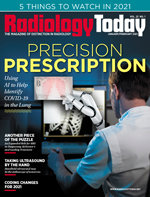 History
A 52-year-old man presented to the emergency department as a level 1 trauma status post assault, with altered mental status, facial lacerations, and swelling. On cross-sectional imaging, the patient was found to have bilateral subdural hematomas, comminuted facial bone fractures including bilateral mandibular fractures, and a splenic laceration.

Findings
Axial noncontrast head CT image at the level of the mandible showed deep soft tissue air, stranding, and swelling in keeping with the patient’s left mandibular fracture. An abnormal density surrounding the left internal carotid artery (ICA) was noted with presence of an adjacent air bubble, which is concerning for vascular injury (Figure 1).

Axial T1 sequence at the level of the mandible showed an abnormal isointense mass adjacent to the left ICA, consistent with an acute intramural hematoma (Figure 2).

Axial gradient echo sequence at the level of the mandible demonstrated a susceptibility artifact in the expected origin of the left cervical ICA, consistent with intramural blood (Figure 3).

Intraprocedural lateral radiograph of the neck showed the left ICA stent-graft just distal and slightly anterior to the catheter (Figure 5). 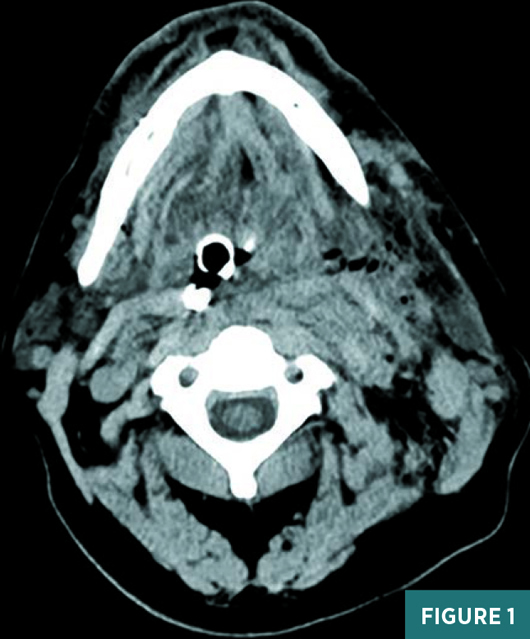 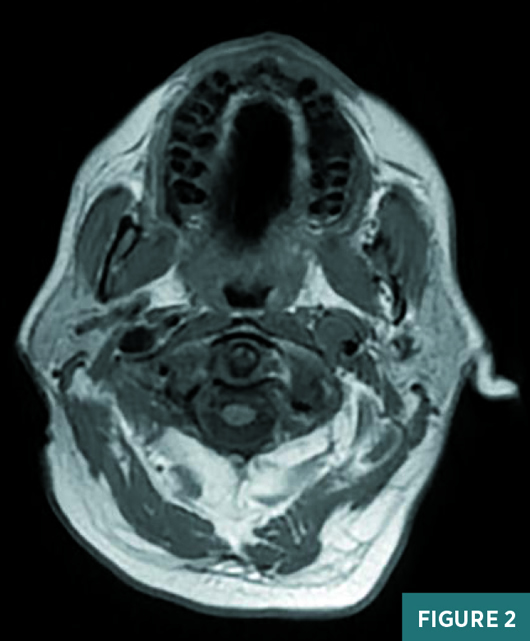 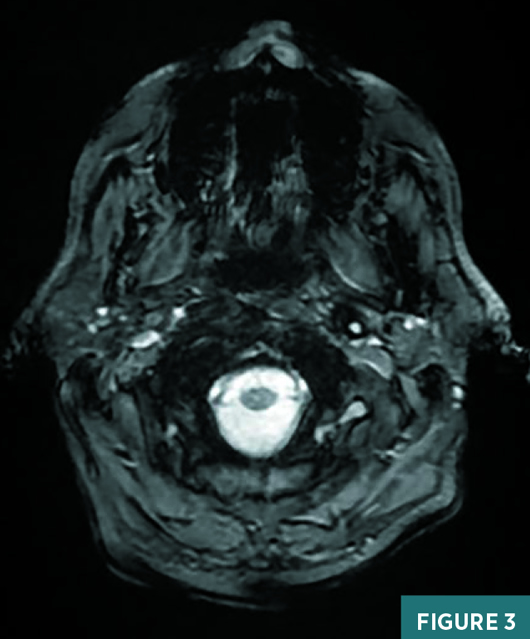 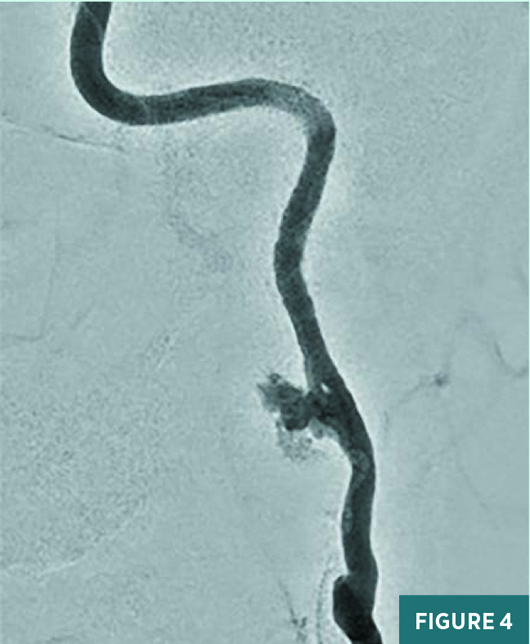 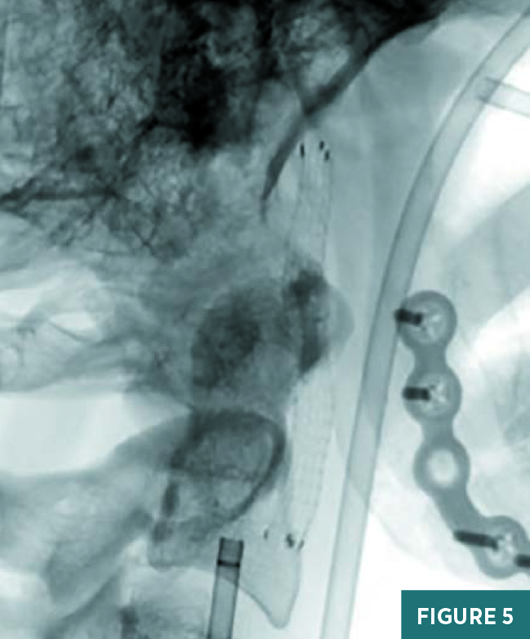 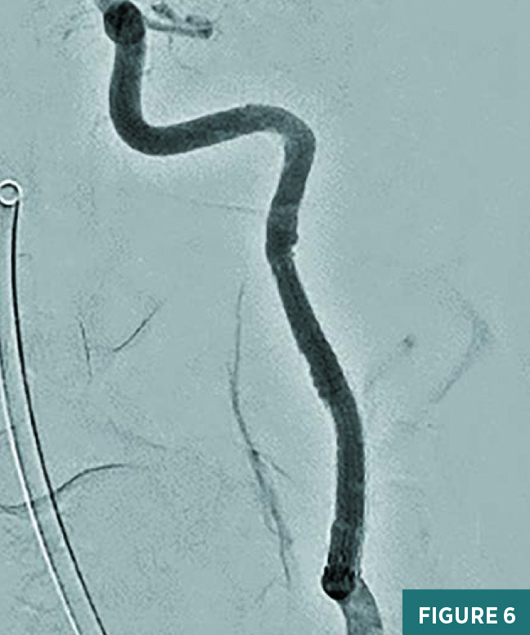 Discussion
Craniocervical arteries have walls composed of three layers: the inner intima; the muscular media, which is variable in thickness; and the outer fibrous adventitia.

Craniocervical artery dissection (CAD) is caused by an intimal tear that allows blood to enter and dissect the media in the cranial direction and is associated with the formation of an intramural hematoma, which is commonly known as the false lumen. There is resulting narrowing of the true lumen and enlargement of the external arterial diameter. CAD may start as a primary intramural hematoma or as an intimal tear and most commonly occurs at the extracranial segments of the carotid and vertebral arteries.

In cases where the dissection deepens and extends toward the superficial vessel wall layers, it can form a weakened focal outpouching, called a pseudoaneurysm, contained only by the thin adventitia.1 A pseudoaneurysm can function as a nidus for distal thromboembolism, increasing the risk for stroke, or may cause local mass effect on surrounding structures. The pseudoaneurysm formation time frame is variable and can occur in hours or develop years after the intimal arterial injury.

CAD can occur as a traumatic injury in the setting of sport-related accidents, cervical manipulation, or motor vehicle accidents.2 Spontaneous dissection is associated with underlying conditions such as fibromuscular dysplasia or connective tissue diseases, eg, Ehlers-Danlos or Marfan syndrome.

The presenting symptoms of CAD are often nonspecific and include headache, neck pain, or scalp tenderness. The sequelae can be catastrophic and include stroke, hemorrhage, or death. Therefore, screening for vascular injuries in the setting of trauma and, specifically, in cases with significant facial bone fractures, is crucial and should be included in the radiologist’s search pattern. Clinically, the diagnosis of a cervical dissection can be challenging, with nonspecific symptoms such as pain, cranial nerve palsies, or Horner syndrome. Early detection of injuries to the cervical vasculature is crucial to allow for timely management and potential treatment as well as minimize the risk for any associated complications, such as stroke.

Noncontrast head CT is insensitive for dissections but may show the intramural hematoma as a crescent-shaped hyperdense focus.3 On CT angiography, an abnormal vessel contour, with or without visualization of an intimal flap or pseudoaneurysm, is suspicious for an underlying dissection. The previously mentioned intramural hematoma may result in enlargement of the vessel contour given the presence of a mural thrombus. In early and chronic stages, on MRI, the intramural hematoma is usually isointense to surrounding structures. Therefore, T1-weighted images with fat saturation may not be able to detect an acute carotid dissection. Between seven days and two months, the hematoma is bright on T1-weighted images.4

Endovascular restoration of the vessel lumen with stent or stent-graft placement should be considered in patients with flow limitation, persistent or progressive symptoms, and concern for or evidence of expansion of a concomitant pseudoaneurysm.5

Arterial dissections resulting in stenosis or near occlusion usually resolve with only mild residual mural disease. This is in contradistinction to dissections with total occlusion, which may recanalize but often require intervention to return to their predissection caliber.

— Anna Luisa Kuhn, MD, PhD, is an interventional neuroradiology fellow in the department of radiology at the University of Massachusetts Medical Center in Worcester.

— Ajit S. Puri, MD, is an associate professor in the division of interventional neuroradiology in the department of radiology at the University of Massachusetts Medical Center.

— Jasmeet Singh, MD, is an associate professor in the division of interventional neuroradiology in the department of radiology at the University of Massachusetts Medical Center.