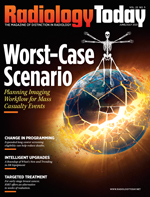 The best way to measure blood flow in the brain in real time is transcranial Doppler (TCD). Although TCD was introduced by Rune Aaslid in 1982, and the information it provides is essential to the care of critically ill patients—especially for those who have suffered a stroke or traumatic brain injuries—it never really caught on, says Robert Hamilton, PhD, chief scientific officer and cofounder of NovaSignal Corp, a medical device and data company based in Los Angeles.

The problem, Hamilton says, is that special expertise is required to perform the ultrasound.

Zsolt Garami, MD, medical director of the vascular ultrasound lab at Houston Methodist Hospital, agrees. While it is important, he says, “TCD is not really very well understood and really well utilized.” A key reason, Garami says, is because few graduate from sonography school having been trained to perform TCD. “And you can’t learn it from books,” he adds.

About 10 years ago, when Hamilton was studying for his PhD in biomedical engineering at UCLA, he worked in the neuro ICU. It was there he noticed that, despite UCLA’s being one of the top neuro centers in the country, it had only two people who were expert enough to perform TCD. “That presented a problem when they needed a TCD after hours or when one of them went on vacation,” Hamilton says.

Hamilton also noticed that a vast majority of the information collected by TCD is discarded. “It’s not fully utilized,” he says.

Today, less than 10% of hospitals are capable of administering a manual TCD scan, says Diane Bryant, who was named CEO and chair of the FDA-cleared NovaSignal last year.

Easier to Use
Hamilton, who has a background in machine learning and AI, describes his thought process as he pondered these issues: “If we could make TCD easier to use, we could get it in the hands of more physicians. And if we could get more out of it using AI, we could improve its usefulness within neurology and other departments.”

Working daily in the neurocritical care unit at UCLA and conducting research in Haiti, China, and Malawi, where access to technology is limited, inspired Hamilton and two UCLA graduate student colleagues to develop the NovaGuide Intelligent Ultrasound, a device that combines robotics and automated cerebral ultrasound. (The company was founded as Neural Analytics Inc in 2013 but rebranded as NovaSignal Corp in July 2020.)

The NovaGuide uses AI to automatically find the main cerebral artery, quickly assess blood flow velocity, and count emboli. One of the keys to its success, Hamilton says, is that it is able to automatically find the temporal window, the thin spot in the skull that allows ultrasound energy to assess blood flow velocity. Emboli can be solid matter or air bubbles that enter the bloodstream during invasive medical procedures. Knowing the rate and presence of emboli in the cerebral circulation is critical for decision making when managing patients suspected of stroke, Hamilton says.

The NovaGuide does not replace CT screening, CT angiography (CTA), or MRIs, which also can provide valuable information about the structure of the patient’s brain, Hamilton says. Rather, he says, these imaging tests are complementary. However, ultrasound provides unique advantages compared with traditional imaging modalities, including its portability and cost.

Evaluating Treatment Options
One of the leading causes of ischemic stroke is blockage in the arteries. Vasospasm occurs when a brain blood vessel narrows, blocking blood flow. Vasospasm is often a complication of a subarachnoid hemorrhage. It can be caused by a ruptured aneurysm or head injury. Being able to see blood flow in real time can help determine the best treatment for these patients.

Five clinical trials are underway to expand the use of the NovaGuide technology, Hamilton says. “All five have in common that they’re looking at some disruption of blood flow in the brain,” he says. One of the larger studies, launched in April and being conducted at 10 centers, is looking to see whether the NovaGuide could be used as a triage device for identifying large vessel occlusion in patients with stroke.

“This could fill a critical gap where CTAs are unavailable,” Hamilton says. With more than 200 clinical studies published each year, the use of cerebral blood flow data is clearly expanding, he notes.

The TCD-like device has already made its mark in combating the novel coronavirus that caused the pandemic. In April 2020, three large medical institutions on the East Coast contacted the company, Bryant says. “Their message was very consistent,” she says. “There was evidence showing that COVID-positive patients were getting blood clots in multiple organs, including the brain and lung.”

When COVID-19 first emerged in December 2019 in Wuhan, China, it was believed to be an acute respiratory disease syndrome, such as the flu, Bryant says. Using NovaSignal and NovaGuide, researchers at the Icahn School of Medicine at Mount Sinai in New York and Brown University in Providence, Rhode Island, were able to determine that the COVID patients’ lungs were not contracting, as with a flu, but rather dilating, and it was the dilating that was preventing them from being oxygenated.

“That’s why so many patients were dying, even though they were under ventilation,” Bryant says. “Ventilation was forcing air into their lungs, but their lungs were incapable of absorbing that oxygen.” The researchers published their findings in the American Journal of Respiratory Critical Care Medicine, the journal of the American Thoracic Society, in October.

Additional Roles
Garami sees an important role for NovaGuide as a monitoring tool when implanting ventricle assist devices as well as when doing valve replacements and other procedures. “We can use it to really guide and train our surgeons on how to prevent complications when doing these procedures,” he says. The information about blood flow is extremely important, “not just for stroke but also for vasospasm” in ICUs; its guiding management helps physicians to know what medications to give to prevent vasospasms and strokes,” he adds. In 2019, Houston Methodist Hospital became the first to acquire the NovaGuide Intelligent Ultrasound to monitor blood flow during open heart surgery.

Hamilton compares the NovaSignal technology to EKG for the heart or blood pressure for the body. “Blood flow in the head is a critical parameter that needs to be monitored,” he says. “Our vision for this technology is to integrate it in a number of areas of medicine and not just neurology or cardiology.”

Bryant says NovaSignal’s top challenge is spreading awareness of its devices. “When you say TCD, most physicians will harken back to 30 years ago when TCD was invented and had tremendous promise but really no adoption,” she says. “It was too hard to use. We’ve taken that fundamental technology, but we added robotics, so it’s completely automatic, and added AI to diagnose the results.”

Since its founding, the company has been awarded grants of more than $26 million by the National Institutes of Health, the National Science Foundation, and the Department of Defense. More than 110 systems are in use in the United States and Europe.