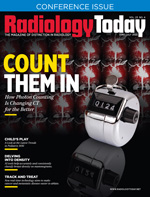 For most people in the radiology field, the term tomosynthesis conjures up thoughts of breast imaging. Since receiving FDA clearance in 2011 for screening mammography, digital tomosynthesis (DTS) technology has become virtually synonymous with 3D breast exams, and many clinicians are unaware of its emerging benefits in a far wider range of imaging applications. While not yet routine in most imaging facilities, DTS has significant advantages over the competing modalities of X-ray and CT in many applications, and its versatility will only grow in the future.

As a volumetric modality, DTS provides far greater anatomic detail than conventional 2D X-ray. Through capture of thin anatomic slices, it reduces the interference of overlapping tissue that can obscure clinically significant abnormalities on patient images. At the same time, DTS imaging is far less involved than CT. In particular, image acquisition and processing are faster, and today’s devices are less costly and easier to use, and occupy far less real estate than CT. Significantly, DTS involves much less patient radiation exposure.

DTS is a form of geometric tomography using conventional X-ray equipment. The term, according to geometrictomography.com, denotes an “area of mathematics dealing with the retrieval of information about a geometric object from data about its sections by lines or planes” and today is most widely used in radiology in CT imaging. DTS uses projection images that are acquired as an X-ray tube, and also in some instances a digital detector, move(s) in a limited arc—typically between 15% and 50% of the volume being imaged—vs the 360° rotation of CT.

A variety of sophisticated algorithms and Fournier translations are combined to create 3D images that use the acquired data to synthesize the desired coronal (vertical) plane view of the patient. The limited arc restricts the depth resolution of all slices. The plane around which the image pivots is in sharp focus, while the tissue above and below this plane is less distinct. However, current DTS technology leverages advanced algorithms to compensate for these so-called blurred artifacts.

Old Is New Again
Interestingly, the principles of tomosynthesis in medical imaging are decades old. Prior to the advent of digital detectors, early experimental tomosynthesis efforts involved scanning a series of film-screen images and then reconstructing a 3D image using a specialized algorithm. Clearly, this lacked practical application.

During the 1990s, the introduction of flat-panel digital radiographic detectors provided the acquisition speed, as well as the noise and distortion reduction, to make tomosynthesis realistic. Today, it is coming into its own as a modality superior to X-ray and far less complex than CT for many applications.

With the challenges of developing appropriate detectors and depth resolution now in the past, the modality has been moving into the mainstream, as a growing number of devices are being introduced that support a wider range of imaging applications, from the sternum and ribs to the skull and joints.

Supporting this versatility, detector/tube geometry of motion is now more varied. In some instances, the two may move in parallel planes. They may remain in fixed positions relative to one another as they move in an arc to capture the image. Alternately, the detector may remain stationary as only the tube moves in an arc.

Also being refined and optimized for various clinical applications are acquisition parameters, including tube movement during acquisition, number of images, and acquisition angle. As that trend continues, radiologists, technologists, and referring physicians would be well advised to stay informed as DTS evolves and think well beyond breast imaging. The following are some areas where DTS is proving useful.

Chest
DTS of the chest as an alternative to conventional radiography leads to considerable diagnostic improvement and is becoming more common. It is emerging as a promising technology for the diagnosis of equivocal or suspected pulmonary lesions.1 DTS has been used to contribute additional information to eliminate false-positives as an alternative to sending patients directly to CT to investigate whether a lesion is extrapulmonary or benign. It also has potential to follow up on known nodules. In addition, DTS has applications in cystic fibrosis,2 tuberculosis, and asbestos-related diseases.

Studies have also shown that, although CT is more sensitive than conventional X-ray for COVID diagnosis, it is used only in a small number of patients. While more studies are required, DTS may serve as a useful substitute for CT in some cases.3

Abdomen
Compared with X-ray, abdominal DTS has demonstrated improvements in the evaluation of a variety of abdominal anatomical structures, such as the pancreato-biliary and gastrointestinal tracts. In particular, it is emerging as superior in evaluation with patients who have significant superimposition of bowel gas. These cases are difficult to assess without contrast and/or invasive procedures. Compared with X-ray, DTS has also demonstrated success in helping to diagnosis urinary tract calculus disease,4 as well as detecting and locating urinary calculi with minimal radiation exposure increase over X-ray.

Fractures
Especially in emergency departments and urgent care settings, missed fractures on X-ray comprise a significant number of missed diagnoses, making them the most common type of misdiagnosis. As an adjunct tool or for routine use, DTS can offer significant improvement over X-ray. Additionally, the literature cites DTS as offering enhanced detection of not only routine but also micro- and occult bone fractures, which can typically be detected only by CT or MRI.5 The modality also is especially useful in delineating certain complex anatomical structures, including skull, facial bones, atlanto-axial joints, and carpal and tarsal bones.

Rheumatology
X-ray is the most commonly used modality for joint evaluation but is significantly less sensitive than CT and MRI. In this application, CT is costly and burdensome for radiologists. MRI is excellent for imaging ligaments, menisci, and tendons but has strong limitations in evaluating bone. DTS may provide a useful compromise.

In addition, with outstanding imaging of joint spaces and erosions, DTS is emerging as useful for screening and monitoring of arthropathies.6 Several studies have noted that it can improve detection of degenerative and inflammatory arthritis as well. DTS may also have application in evaluating osteoarthritis, rheumatoid arthritis, and gout,6 although additional studies are required.

Head and Neck
DTS has excelled in sinus imaging. Moreover, with its enhanced detail compared with X-ray, it is being used in the diagnosis of temporomandibular joint dislocations and orbital fractures. It has also demonstrated success in dental implant planning.7

The Future
As DTS becomes increasingly sophisticated, its applications are rapidly increasing. Today, it is showing promise in radiotherapy for patient positioning and also oncology for computer-aided diagnosis. The future for DTS beyond the breast is growing increasingly bright.

— Michael Yuz, MD, MBA, is a diagnostic radiologist specializing in advanced modalities. He is the founder and CEO of USARAD Holdings.

— Peter Dawson, FRCP, FRCR, initially trained as a physicist and now is a radiologist in London. He was clinical director of imaging at UCL Hospitals London, president of the British Institute of Radiology, and registrar and Roentgen Professor of the Royal College of Radiologists.

— Floyd Katske, MD, is a urologist and a past president of the California Urological Association. He served as series editor for the Clinical Uroradiologic Conference in the journal Urology and managing editor of the Weekly Urological Clinical Letter.