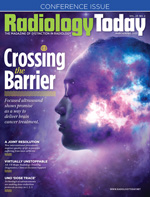 History
A 41-year-old woman with a medical history of autism had recent cognitive decline and presented with multiple falls and syncope. Physical examination was significant for alert and oriented x1 with ability to follow simple commands, no pronator drift, and intact sensation to light touch throughout. Gait evaluation was deferred. Patient was then referred for imaging of the head.

MRI of the brain with and without contrast revealed a slightly heterogenous superior cerebellar mass causing downward displacement of the cerebellar tonsils and marked neovascularity (Figure 2). There was mild to moderate diffusion restriction within this mass (Figure 3). Compression of the fourth ventricle was again seen with resultant obstructive hydrocephalus (Figure 4). No periventricular interstitial fluid was seen which was suggestive   of a chronic, slow growing lesion (Figure 5).

With no evidence of a dural connection, initial diagnostic considerations included metastatic disease, hemangiopericytoma, or hemangioblastoma. Given the patient’s age, a medulloblastoma was felt to be unlikely.

The patient was taken to surgery for midline suboccipital craniectomy for resection of this skull base tumor. Surgical findings revealed a soft, friable extra-axial mass with attachment to the tentorium. Pathology report was notable for a spindle cell neoplasm with cytological atypia demonstrating patchy positivity for epithelial membrane antigen and negative S100 and CD34 markers consistent with the diagnosis of a meningioma. 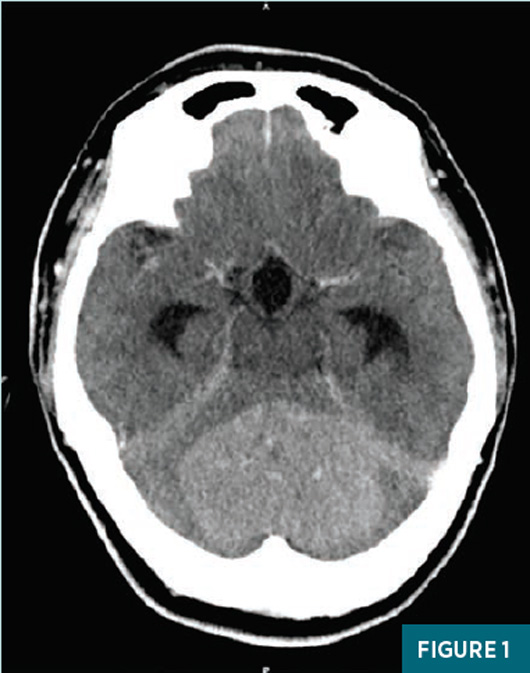 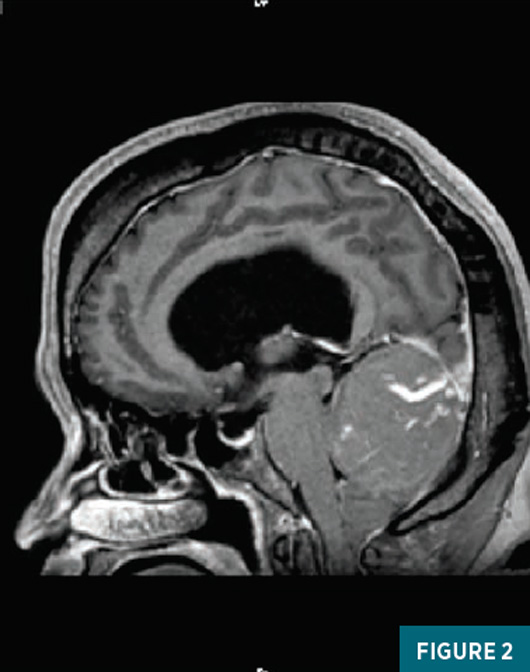 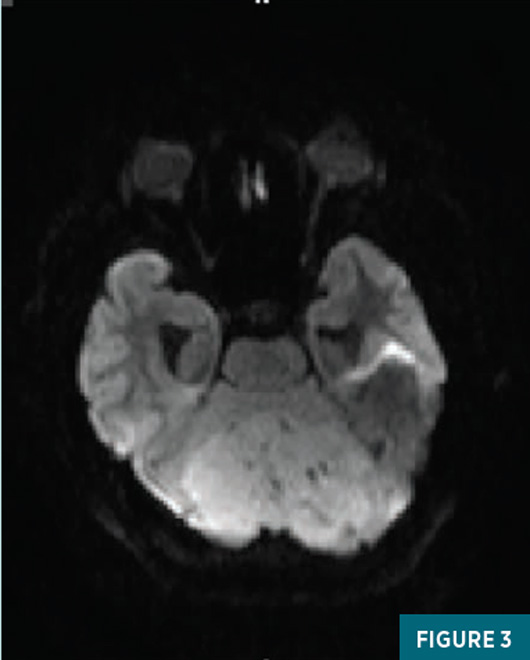 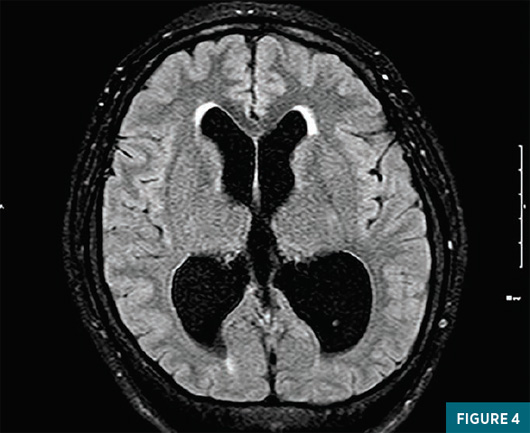 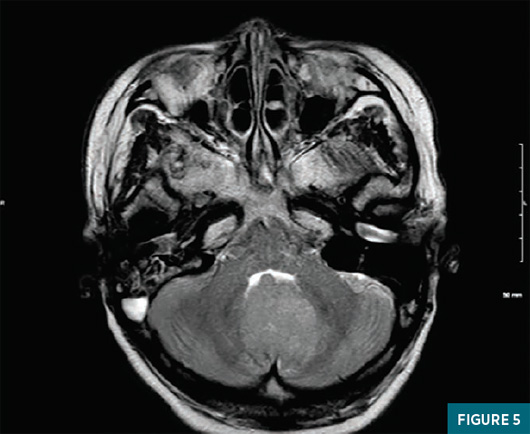 Discussion
Meningiomas are common, low-grade tumors that originate from the meninges. Often asymptomatic, they can be detected incidentally on imaging or when they grow large enough to cause mass effect on the surrounding structures. Symptoms that can be associated with meningiomas include headaches, vision changes, focal seizures, and many more, depending on the area of mass effect. Peak incidence is usually around the fifth or sixth decade of life and, when seen in younger patients, one should keep in mind the possibility of neurofibromatosis type 2, as these individuals are predisposed to developing intracranial and spinal meningiomas.

The characteristic appearance of a meningioma is a homogenous, circumferential, extra-axial mass with varying amount of surrounding vasogenic edema. Internal calcifications may be seen within the mass. Owing to their hypercellular nature, they can appear as slightly hyperdense on CT, with associated low apparent diffusion coefficient values and positive diffusion-weighted imaging on MR. They generally feature homogenous contrast enhancement and a “spoke-wheel” appearance of blood vessels may be appreciated. A cerebrospinal fluid cleft, enhancing dural tail, and buckling of the gray-white matter may also be observed; these help confirm the extra-axial origin of these lesions.

Treatment is generally carried out via surgical resection, and recurrence can occur in up to 30% of cases.

In closing, it is important to keep meningiomas in your differential when there is suspicion of a slow-growing process. Although sometimes classic features may nail down the diagnosis of a meningioma, other times, imaging characteristics overlap with numerous other mass lesions.

3. Ildan F, Erman T, Göçer AI, et al. Predicting the probability of meningioma recurrence in the preoperative and early postoperative period: a multivariate analysis in the midterm follow-up. Skull Base. 2007;17(3):157-171.