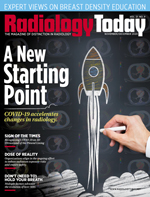 History
A 56-year-old woman with a history of phyllodes tumor (PT) in the left breast presented with a new palpable left breast mass. Her breast-related history is extensive. Bilateral breast implants were placed in 2009. In 2013, the patient had a left breast excisional biopsy for a concerning mass, and pathology identified a cellular fibroadenoma with epithelial ductal hyperplasia. In 2015, an additional palpable left breast mass was evaluated and consistent with high-grade PT. She underwent a skin-sparing left mastectomy. Postsurgical pathology revealed two separate high-grade PTs measuring 6 cm and 3 cm with negative margins. Radiation therapy was not performed.

In 2020, five years after initial resection, the patient again appreciated a left breast mass on self-examination and appropriate work-up was initiated. 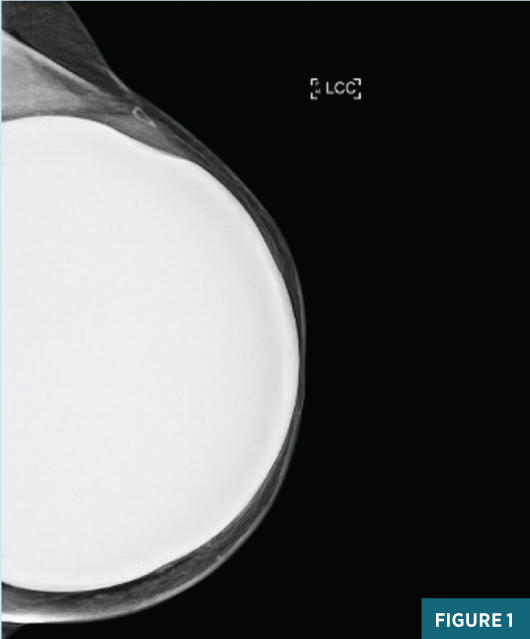 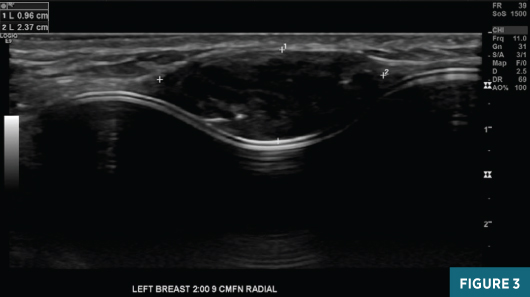 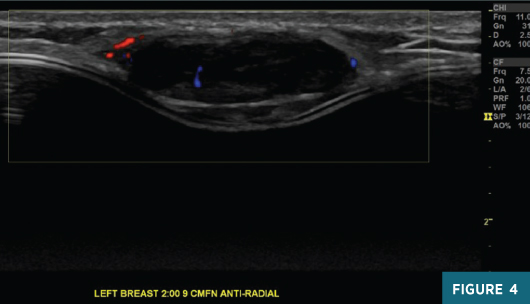 Sonographic features were suspicious for malignancy and an ultrasound-guided needle biopsy was performed; pathology results were most consistent with malignant PT. The patient underwent left breast partial mastectomy with removal of the left breast implant. Postoperative pathology results confirmed a recurrent malignant PT. After consultation with the radiation oncologist and given the recurrent disease, the patient opted to pursue postsurgical radiation therapy.

Discussion
PT is a rare fibroepithelial neoplasm of the breast with the ability to grow and metastasize.1 These neoplasms are slow growing, painless, and classically detected in the upper outer quadrant of the breast.2 PT accounts for <1% of all breast tumors and 2% to 3% of all fibroepithelial breast lesions.3 It typically occurs in women aged 30 to 70 years, with average presentation at 52 years.4 On histology, PT has a characteristic leaflike architecture with epithelial papillary projections into cystic spaces and a hypercellular stroma.5 In fact, the name phyllodes is derived from the Greek word phullon, meaning “leaf,” which reflects its histologic characteristics.

Imaging findings of PT often resemble that of a fibroadenoma.4 On mammography, PT appears as a large, circumscribed, lobulated mass without calcifications.6 Sonographic evaluation demonstrates a well-defined lobulated mass, often with a pseudocapsule and fluid-filled clefts with internal echogenic elements. In general, a solid mass with multiple cleftlike cystic spaces with increased through transmission is the typical appearance and should raise the question of PT. Doppler evaluation may demonstrate vascularization within the solid components of the mass, though Doppler has variable sensitivity.1 MRI may also be used to evaluate PT and usually reveals a T2 hyperintense oval-shaped, lobulated, circumscribed mass with rapid enhancement after contrast administration.7 Overall, imaging characteristics are quite nonspecific, and the differential diagnosis usually includes fibroadenoma or primary sarcoma of the breast.8

The treatment of PT is surgical excision with wide margins to avoid recurrence of both benign and malignant tumors. Despite this, local recurrence is observed in up to 25% of cases. Malignant tumors are detected in 5% to 25% of PT cases, with up to 25% being metastatic. Metastatic PT can spread hematogenously to the lungs, pleura, or bones.7 Mastectomy may be performed for very large or recurring malignant PT.9

— Brad Kincaid, MD, is a radiology resident at UConn Health at the University of Connecticut.