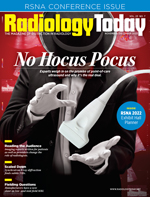 Traumatic brain injuries (TBIs) historically have been diagnosed with MRI and CT scans, but these options have their limitations, most notably often missing mild damage. These so-called “invisible” TBIs may result in severe loss of function and diminished quality of life. Therefore, researchers have spent years looking for new techniques to identify the subtle trauma, with one promising solution coming about lately.

Rama Madhurapantula, PhD, a research assistant professor at the Illinois Institute of Technology in Chicago, and Joseph Orgel, PhD, a professor of biology at the Illinois Institute of Technology, worked together on using synchrotron X-ray diffraction for diagnosing invisible TBIs. The duo recently shared their findings at the American Crystallographic Association’s 72nd annual meeting in Portland. TBIs can create irreversible damage to the structure and packing of myelin, the sheaths that insulate nerves and enable the transmission of brain signals, due to stretching, compression, or, in the case of concussions, vigorous shaking.

“Characterizing the changes to myelin at a molecular level is essential for understanding the
fundamentals of TBIs, and looking at such small scales will also catch mild to moderate cases,” Madhurapantula says. “While traditional imaging methods work on the micron scale, synchrotron X-ray diffraction can capture much smaller changes on the nanometer to angstrom scale in situ.”

A Little History
X-ray diffraction was born in the early 20th century for the study of material science and early characterization of biological materials. The fundamental definitions of protein structure originated with fiber diffraction (of alpha and beta keratin, coining the terms alpha helix and beta sheet structure), DNA, muscle, and collagen.

“Within about 30 years of these experiments, the first synchrotron was built for the study of high-energy particles,” Madhurapantula says. “It was quickly noticed that as a byproduct, very bright light was emitted, including X-rays. By the 1950s and 1960s, experiments using the byproduct of synchrotron experiments increased because the high intensity and low light divergence could greatly accelerate the rate at which data could be collected.”

For some projects, these properties were the only way possible for data to be obtained. By the 1980s, the first dedicated synchrotron for “byproduct” rather than high-energy physics use was built, specifically to take advantage of these light emittance properties to study material sciences, inclusive of biological and cellular matter.

How It Works
Synchrotron X-ray diffraction aids in diagnosing invisible TBIs. The X-rays are approximately 70,000 times more intense than those used for a chest X-ray and focused into a very small area to generate a high-intensity beam. As the beam hits a sample, the position and intensity of the diffracted rays are captured as a pattern on a photographic plate. This information helps
determine the material and mechanical characteristics of neurological tissues.

Orgel explains that charged particles are accelerated through a series of magnets to almost the speed of light and kept orbiting in a “storage ring.” At junctions of magnets, they emit intense light—around 10 billion times greater than conventional X-ray sources, for example.

“This high-intensity beam can then be shined upon biological samples such as protein crystals, tissues, and tissue extracts,” he says. “What we see is a function of [the type of] light that is directed at the object. Visible light, which all humans perceive through their eyes, is rather low energy. We can reasonably see tiny objects that are about 0.5 mm apart, but anything closer than that may require some level of magnification and better lighting.”

X-rays, on the other hand, are higher in energy. The higher the energy, the shorter the wavelength. Wavelength is inversely proportional to resolution, such as one’s ability to delineate the boundaries between two very closely spaced objects or observe objects within objects. So, this high energy increases the level of detail that can be detected to nanoscopic or atomic levels.

“The low divergence [spreading out of light that leads to lost signal] and high intensity of the synchrotron enables experiments on materials that don’t diffract X-rays very strongly,” Madhurapantula says. “Biological matter, because it is made up of repeating patterns of materials [the repeating structures in proteins or the layering of structures like myelin] are intrinsically able to diffract X-rays without being, strictly speaking, crystalline.”

Thus, by using synchrotron sources, one is able to look at cellular tissues without changing them, preparing them for experiments that might introduce artifacts.

“Although we have to be very careful to preserve this delicate innate crystallinity, my research group has become adept at doing so for a range of materials,” Orgel says. “This is crucial for the ‘invisible injury’ of TBI for moderate and mild TBI states. The invisibility of the injury is only because the techniques we use to try and see them do not have high enough resolution to see the tiny scale at which damage occurs.”

Orgel was contacted by the Army Research Laboratory several years ago, which asked whether his group could access this nanoscopic size using X-ray diffraction.

“It was the perfect partnership because I had decided to do exactly this and had already worked out how to do it,” he says. “Their funding enabled my group to test our hypothesis and preparation successfully in less than a year and determine the threshold at which permanent damage occurs to a neuron. This was only possible because the X-ray diffraction methodology allows us to detect structures and structural changes at the nanoscopic level and because of our ability to not introduce artifacts to the experiment while preparing the sample for visualization, a problem other techniques suffer from.”

Today, synchrotron X-ray diffraction can capture much smaller changes on the nanometer to angstrom scale in situ, which is important because the changes that occur in the individual injury are at this size.

“Sample preparations can easily affect things on this scale, if not handled properly, and, if a technique is not able to resolve to this level, then such changes are undetectable to that technique,” Madhurapantula says.

In the development of the technique, the biggest challenge was proper calibration and making sure the team understood the circumstances where the tissue’s inherent crystallinity would be preserved, lost, or otherwise affected.

“At this time, it is handling large amounts of data,” Orgel says. “All is well if our processes work as expected. If they don’t, there are a lot of images to sift through manually to figure out what went wrong.”

“This matters for determining what form of medical interventions are likely to be most effective, depending on the circumstances of the injury [acceleration/deceleration and force of impact],” Orgel says. “It also provides a reliable technique for further investigation of what types of accidents lead to what types of injuries and a basis for testing treatments. Incidentally, the techniques we refined in this investigation have already been applied to other studies of skeletal and cardiac muscle injuries; we expect to continue to expand applications into the future.”

Despite its success, Orgel feels synchrotron X-ray diffraction is unlikely to become a scaled-up application technique.

“It is a discovery technique that allows the development of diagnostic, preventative, and rehabilitation approaches,” he says. “We have a five- to 10-year development plan for translation of the technique’s findings into diagnostic protocols, for instance.”

Madhurapantula notes the team is serving as experimental contributors to a project, a simulation of the entire human body, that is being developed to be a reliable predictor of injuries.

“We have been able to help train aspects of this simulator to give excellent agreement to the mechanical behavior of tissues observed experimentally,” he says. “This gives tremendous power and flexibility to understanding injuries in the future. It is my hope that when an injury occurs, not too long in the future, a simulator will be able to give immediate clues to physicians as to what to look for and how to help.”

— Keith Loria is a freelance writer based in Oakton, Virginia. He is a frequent contributor to Radiology Today.
Tweets by RadiologyToday
</html