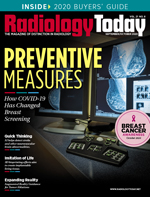 Editor’s Note: This article is based on materials distributed for press conferences at the SNMMI 2020 Annual Meeting.

“Super agers”—individuals whose cognitive skills are above the norm, even at an advanced age—have been found to have increased resistance to tau and amyloid proteins, according to research presented virtually at the SNMMI 2020 Annual Meeting. An analysis of PET scans has shown that, compared with normal agers and those with mild cognitive impairment, super agers have a lower burden of tau and amyloid pathology associated with neurodegeneration, which probably allows them to maintain their cognitive performance. An image showing the comparison of tau and amyloid distribution patterns in these different cognitive aging trajectories has been selected as SNMMI’s 2020 Image of the Year.

“Our cognition reflects who we are as individuals. As we age, most of us lose some of that ability,” according to Umar Mahmood, MD, PhD, SNMMI’s scientific program committee chair. “The Image of the Year provides us with insight into how we can use these PET imaging biomarkers to understand behaviors and therapies that may allow more of us to age better and retain more of our cognitive abilities as we get older.”

“The phenomenon of super aging suggests that cognitively high-functioning individuals have extraordinary mechanisms that resist brain aging processes and neurodegeneration,” said Merle Hoenig, PhD, of the Research Center Juelich & University Hospital Cologne in Germany. Some insights have been collected on amyloid pathology in super agers, but there is no in vivo evidence on tau pathology due to the former lack of available imaging techniques. “We know that tau pathology is more closely associated with cognitive decline than amyloid pathology,” Hoenig continued. “Thus, the resistance, in particular against tau pathology, likely allows these individuals to perform cognitively above average even at advanced age.”

Data from the Alzheimer’s Disease Neuroimaging Initiative were utilized to create three age- and education-matched groups of 25 super agers, 25 normal agers, and 25 patients with mild cognitive impairment, all aged 80 or older. In addition, 18 younger, cognitively normal, amyloid-negative controls were included in the comparison as a reference group. 18F-AV-1451 and 18F-AV-45 PET images obtained for all individuals and researchers compared the tau and amyloid burden between the four groups. A logistic regression was performed to identify genetic and pathophysiological factors best predicting aging processes.

No significant differences between super agers and the younger control group were observed in terms of in vivo tau and amyloid burden. The normal ager group exhibited tau burden in inferior temporal and precuneal areas and no significant differences in amyloid burden, when compared with the younger control group. Patients with mild cognitive impairment showed both high amyloid and high tau pathology burden.

“While super agers may be able to resist aging-associated proteinopathies, in particular tau pathology, normal agers may not and are thus exposed to inevitable cognitive decline due to the accumulation of neurotoxic tau tangles and the advancing aging process,” Hoenig noted. “Moving further to the other extreme of aging, namely mild cognitive impairment, the synergistic effects of both amyloid and tau may accelerate the pathological aging process.”

These results motivate further research to determine responsible resistance factors, which may also inspire the development of novel treatment concepts. “Given the multitude of factors involved in the aging process, it will certainly be challenging to develop therapeutics to tackle the factors involved,” Hoenig said. “However, if we understand which individuals are resistant to dementia, this will help us identify potential pathways that promote successful aging, protecting against not only Alzheimer’s disease but also other aging-associated diseases, such as vascular disease and other forms of dementia.”

A new molecular imaging approach utilizing 18F-FDG PET and MRI can precisely identify the location of pain generators in chronic pain sufferers, often precipitating a new management plan for patients. This research was presented at SNMMI 2020.

Pain is the most common reason to seek medical attention, and those who suffer from it outnumber those who suffer from cancer, heart disease, and diabetes combined. According to the National Center for Complementary and Integrative Health, chronic pain affects nearly 50 million adults in the United States and costs the nation’s health care system as much as $635 billion in total expenses, including imaging and treatment costs.

“In the past few decades, we have confirmed that anatomic-based imaging approaches, such as conventional MRI, are unhelpful in identifying chronic pain generators,” said Sandip Biswal, MD, musculoskeletal radiologist and an associate professor of radiology at Stanford University School of Medicine in Stanford, California. “We know that 18F-FDG PET has the ability to accurately evaluate increased glucose metabolism that arises from acute or chronic pain generators. As such, in our study we examined PET/MRI as a potential solution to determine the exact molecular underpinnings of one’s pain.”

In the study, 65 patients with chronic pain underwent 18F-FDG PET/MRI from head to foot. Maximum standardized uptake values and target-to-background ratios were measured using image analysis software. PET/MR images were evaluated by two radiologists to determine whether increased 18F-FDG uptake occurred in the site of symptoms or in other areas of the body. Imaging results were then discussed with the referring physician, who determined whether a change in the pain management plan would follow.

Increased uptake of 18F-FDG in affected nerves and muscle was identified at the site of pain and other areas of the body in 58 out of 65 patients. This resulted in a mild modification of management plan, eg, an additional diagnostic test, for 16 patients and a significant modification for 36 patients, eg, a new invasive procedure suggested or ordered. In total, new management plans were implemented for 40 out of 65 patients—something that had not been anticipated by the referring physician.

According to Biswal, “The results of this study show that better outcomes are possible for those suffering from chronic pain. This clinical molecular imaging approach is addressing a tremendous unmet clinical need, and I am hopeful that this work will lay the groundwork for the birth of a new subspecialty in nuclear medicine and radiology. Using this approach will require knowledge and expertise not only in nuclear medicine but also in musculoskeletal imaging, neuroradiology, and potentially other fields, such as body imaging and pediatric radiology, where pain syndromes are important clinical problems.”

Whole body PET has, for the first time, illustrated the existence of interorgan communication between the heart and kidneys via the immune system following acute myocardial infarction. According to research presented at SNMMI 2020, the identification of a systemic inflammatory response to myocardial infarction has the potential to assist physicians in identifying patients most at risk of disease progression and most likely to respond to therapy.

Patients with acute myocardial infarction often develop impaired kidney function, thought to be mediated by the activation and mobilization of immune cells, or inflammation. While inflammation is necessary for effective healing, uncontrolled inflammatory cell activity can be detrimental for both the heart and the kidneys. To further understand the mechanics of this bidirectional interaction, researchers conducted a preclinical analysis of a novel imaging agent that targets inflammatory cells after myocardial infarction.

Cardiac CXCR4 signal was significantly elevated on the first day of imaging and returned to sham level after seven days. Renal CXCR4 signal was unchanged on the first day of imaging but was reduced after seven days as compared with sham levels. Cardiac and renal signal were directly correlated, suggesting an inflammatory link between the heart and the kidneys. Ex vivo autoradiography confirmed a significant correlation between tracer retention in the myocardial infarction region and the kidneys.

“This study provides a foundation for simultaneous examination of heart and kidneys after myocardial infarction by using molecular imaging,” noted Rudolf Werner, MD, PhD, a resident in the department of nuclear medicine at Hannover Medical School in Germany. “It provides an impetus for the pursuit of systems-based multiorgan imaging to investigate systemic response to focal injury.

“Assessment of inflammation after myocardial infarction is beginning to be evaluated in clinical populations,” Werner continued. “With the growth of long-bore cameras with larger fields of view, the concept of multiorgan imaging will expand substantially in the next years. In the future, nuclear medicine techniques may identify the optimal patient and time point for anti-inflammatory therapy and identify the added risk to off-target organs after primary injury.”